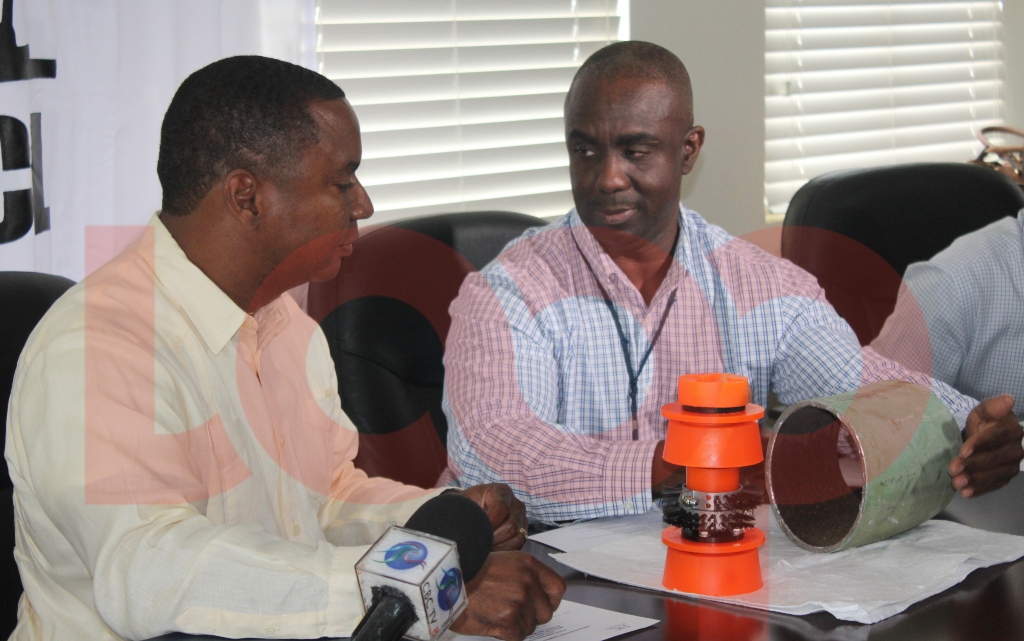 An inspection of the pipelines of the Barbados National Terminal Company Limited (BNTCL) has revealed a number of defects which are to be addressed under the Pipeline Maintenance Project.

The issues with the pipeline were revealed at a press conference today at the BNTCL Pegwell site. Minister of Energy and Water Resources, Wilfred Abrahams, sought to assure residents in districts to be affected by the repair work that there is no need to worry.

“I want to disavow anyone of concerns that there may be an emergency situation going on here. I, probably more than anybody else, know the effects of a lack of maintenance and having to deal with a crisis situation caused by a lack of maintenance. When we had the issue on the South Coast, we dealt with it but as unpleasant and inconvenient and dangerous as that was, it would be even more so, if natural gas or oil pipelines were allowed to leak. This is a case of us employing best practice to ensure that the operations are safe …

We do not intend to wait until something happens to then do patch-up and catch-up work.”

The inspection of the pipelines revealed 14 “anomalies” which Operations Superintendent, Terrence Straughn said are likely to be metal-loss on the coating of the pipelines.

“As part of the inspection, a pipeline integrity gauge is sent through the pipeline and on that gauge is an ultrasonic device which measured the wall thickness of the pipeline itself. In so doing, 14 anomalies were found which do not indicate the presence of a leak but [rather] pipeline metal losses of less than 50 percent of coating defect.”

He said the BNTCL adheres to the USA Pipeline Safety Act (2002) and its standards require that inspections be conducted within the first 10 to 15 years of operations which means the almost 10-year-old pipelines at the plant are scheduled for repair and maintenance within this calendar year.

The communities where repair work is to be carried out include Charnocks, Pegwell, Fairy Valley, Parishland, Wilcox and areas along the Mighty Grynner Highway.  During the time minor traffic disruptions as well as accessibility to certain roads within the listed communities can be expected.

The BNTCL has scheduled a number of town hall meetings to update residents on the Pipeline Maintenance Project. The times and dates are as follows: July 11 at Charnocks Pentecostal Church from 7 pm, July 31 at Pegwell Community Church at 7 pm and August 12 at the Christ Church Community Center at 7 pm.

VIDEO: Pipeline to Worthing Beach marine outfall being blocked down

Without Venezuela's oil, Haiti struggles to keep lights on