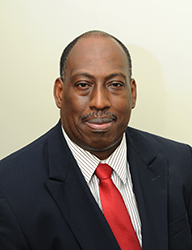 Dexter James, the man at the helm of the Queen Elizabeth Hospital since October 2009, is no longer with the organisation.

A statement issued by the Hospital’s Chairman Juliette Bynoe-Sutherland just before 8 pm on Friday, through Public Relation firm Al-Hart PR, said that with effect from August 30, James “will no longer be employed as Chief Executive Officer (CEO) of the [QEH].”

It said, “the hospital and Dr James, who has been on sick leave from February 27, 2019, have mutually agreed to part ways.”

In October 2009, Dr James was appointed as the CEO and tasked with leading the transformation of Barbados’ lone 600-bed tertiary care teaching hospital.

Before his appointment to the QEH, Dr James was employed with the Caribbean Community Secretariat (CARICOM) as the Director of Corporate Services. In that capacity, he provided advisory support to regional governments and engaged as an expert and technical resource for regional agencies such as PAHO and CAREC and international organizations such as Accreditation Canada.

He is a Certified Management Accountant (CMA) and a Chartered Accountant (CA) of Trinidad and Tobago with an MBA in Health Management from Walden University. He obtained his doctorate from Bangor University (U.K.) in Public Health Organization and Management, with emphasis on public sector organization, management and transformation. In February 2018, in recognition of his leadership capacity and significant contribution to healthcare practice in Barbados, he was appointed as “Professor of Practice” in Public Policy and Healthcare Administration in the Faculty of Medical Sciences, of the University of the West Indies Cave Hill Campus, Barbados.

Of recent, James’ position with the facility had been contentious after his contract for service with the QEH was renewed just days before the May 24, 2018, general elections for a further four year.  It had not been due for renewal for another 18 months and which included an annual salary of BB$257,129.64 and a vehicle.

James went on sick leave the second day into Government’s new-style question and answer Estimates of Revenue and Expenditure process in the House of Assembly back in February, and remained on such leave.

James had come in for some intense questioning while providing details about the financial challenges facing the country’s major hospital.

With Dr James stepping down, Director of Support Services Ms Louise Bobb, who has acted as CEO during his absence, will continue in that role until further notice.