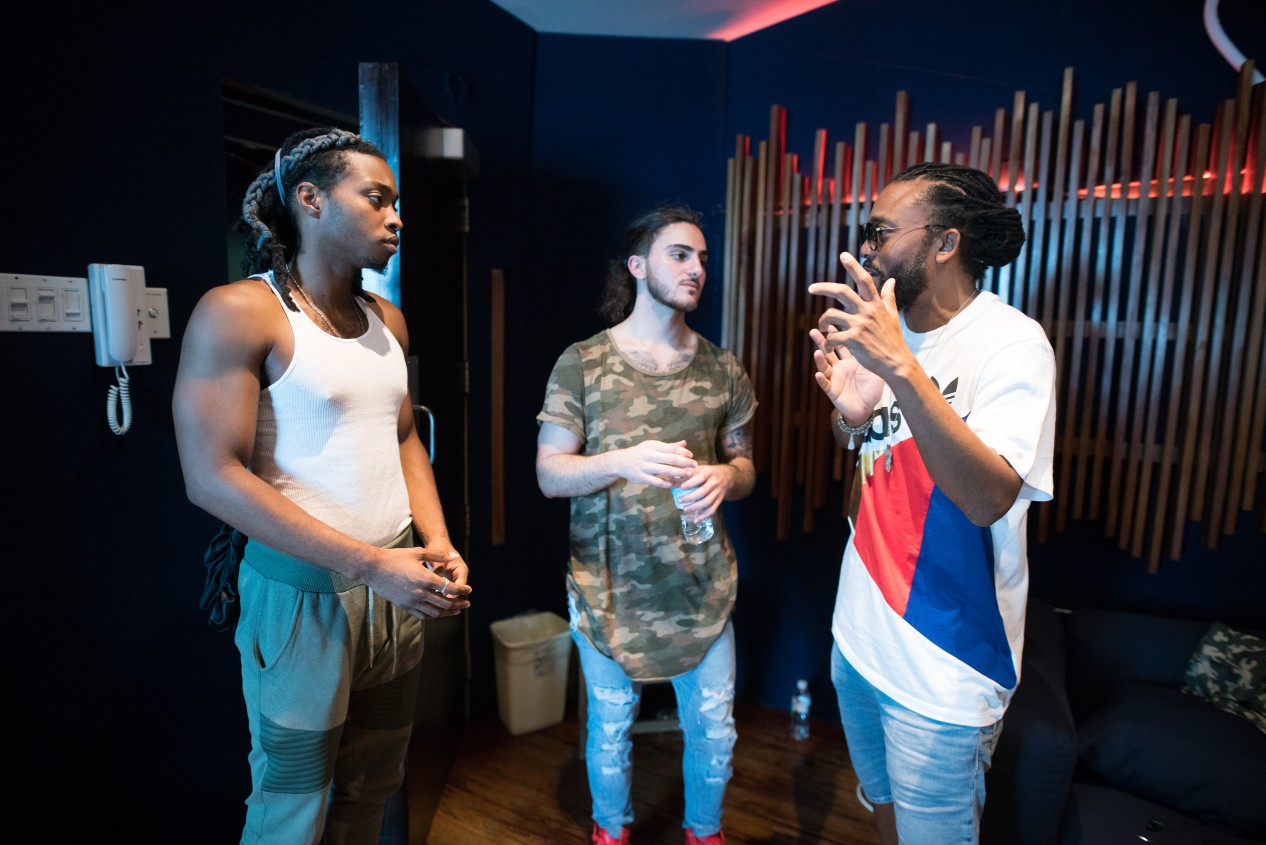 Machel giving sound advice to Tyler Auguste and Jean Farrah, duo from St. Lucia who won in the Performer category at the Digicel Music Academy.

With just a few days to go before this year’s staging of the Machel Monday concert in Trinidad and Tobago, the four winners from the recently-held Music Academy are busy tuning their vocal chords, calming their nerves and mastering their lyrics as they get ready to perform live on stage with the soca legend. The highly-anticipated concert is scheduled to take place on Monday 5th February at the Hasely Crawford Stadium at 8pm.

The winners are Abdiel Matamora from Trinidad and Tobago and duo, Tyler Auguste and Jean Farrah aka Lu City, both from St. Lucia who tied for the Performer category, Shaquille Wilkinson from St. Lucia who won the Producer category and Kevon Alleyne from St. Vincent and the Grenadines who won in the Songwriter category.

Speaking about their performance alongside Machel, the winners collectively described it as euphoric, while echoing each other’s sentiments that; “This has been more than a once-in-a-lifetime-opportunity. It’s just amazing.” One of the winners, Kevon Alleyne, was without words in speaking about how much the Music Academy meant to him; “I’m overwhelmed to be honest. I’ve had to struggle a lot over the years just to get approval and to be known, so to be here with Machel and all these talented people and learning from them is just amazing.”

Hosted in Jamaica from the 19th to 22nd of December 2017 at the Geejam Studios, Digicel Music Academy is aimed at developing and honing the skills of upcoming artistes to help preserve music, which is a big part of the culture in the region and a key focus  area for Digicel. Nine artistes had the opportunity to be mentored and coached by Machel Montano plus Barbadian singer/songwriter Shontelle Layne and Jamil ‘Deputy’ Pierre of Trinidad and Tobago decent.

Machel said; “It was a lot of fun and it is exactly the kind of work I see myself doing in addition to making music and performing. I just want to help young, aspiring artistes achieve the greatness that I’ve been striving to achieve for myself – so that they can become even greater than me. This was all more than a dream for me.”

Delighted with the success of what can be dubbed its inaugural Music Academy, Group Sponsorship Manager at Digicel, Tari Lovell said; “We set out to create a platform for aspiring musical talents to be discovered and get help in taking their career to the next level, but we have achieved much more. We have four talented and passionate artistes who value this opportunity, hundreds of other aspiring artistes who are now hopeful knowing that opportunities like these exist for them in the region and we have thousands of engaged fans and family members waiting to cheer them on to success. We cannot thank Machel, Shontelle and Deputy enough for helping to create these amazing opportunities.”

To watch these talented youngsters live as they perform with the soca legend, everyone can download and tune in to Digicel’s PlayGo app this Monday Feb 5. PlayGo can be downloaded for free by anyone at the Google Play Store and iTunes Store for Android and iOS users respectively, or at www.digicelplaygo.com for laptops.

Soca Kingdom expands as Machel with Digicel include Academy finalists

Machel Montano: get consent first before you wine on someone