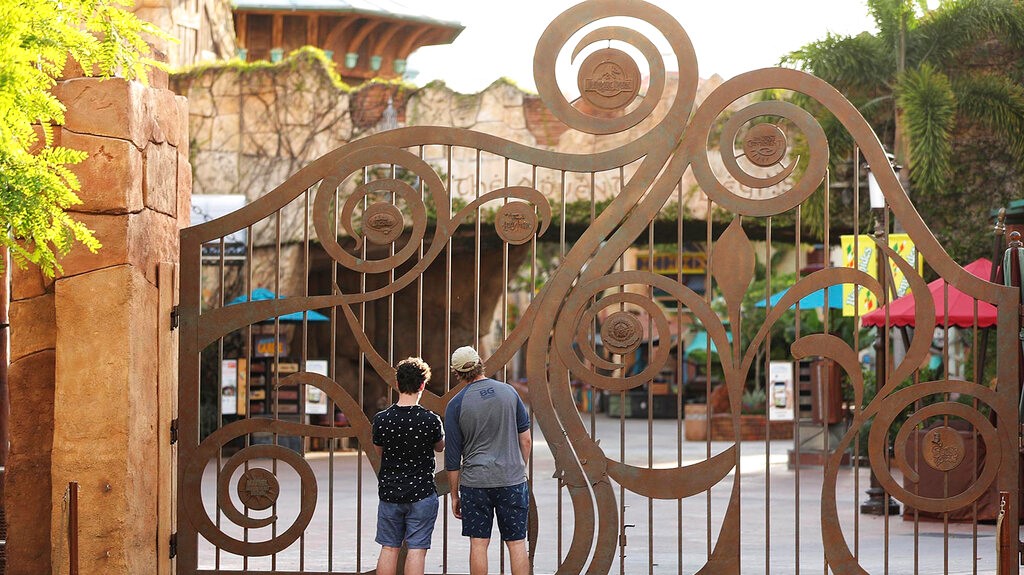 In this Thursday, May 14, 2020, file photo, guests peer through the closed gate to Universal's Islands of Adventure beside Universal CityWalk, in Orlando, Florida. (Stephen M. Dowell/Orlando Sentinel via AP, File)

SeaWorld and Walt Disney World will reopen in Orlando, Florida, in June and July after months of inactivity because of the novel coronavirus pandemic, according to plans a city task force approved Wednesday.

The proposals will now be sent to Florida Governor Ron DeSantis for final approval.

The plan calls for SeaWorld to open to the public on June 11. Disney plans a tiered reopening, with Magic Kingdom and Animal Kingdom opening on July 11, followed by Epcot and Hollywood Studios on July 15. Last week, Universal Orlando presented its plan to reopen on June 5. That plan also has been approved by the Orlando task force, which sent its recommendation to the governor.

"We are developing a series of 'know before you go' communication vehicles and our objective is to reinforce our health and safety messages to guests before they arrive on our property so they are aware and prepared for the new environment," Disney's senior vice president of operations, Jim McPhee told the task force.

He also said the parks would open with limited capacity, but he didn't specify the number of guests who would be allowed in initially. In a statement, the company said attendance will be managed through a new system that requires advance reservations for park entry.

Earlier this month most of Florida's counties entered a modified Phase 1, reopening restaurants and retail at a limited capacity. South Florida, which has been hardest-hit by coronavirus cases, was added to Phase 1 earlier this week. DeSantis has said he's eager to get businesses reopened and is expected to approve plans to reopen the theme parks, which are major pieces of Florida's tourism industry.

Disney World also plans smaller, soft openings prior to July 11, but no specifics were provided.

SeaWorld is planning an employee appreciation event on June 10 before opening to the public the next day, said Interim CEO Marc Swanson.

When Disney Springs, a complex of restaurants and shops near Disney World, reopened, the company formed "social distancing squads," which McPhee said have been popular with guests.

He said they are "a dedicated team of highly energetic and informative cast members who are committed to engaging and inspiring our guests to follow the appropriate guidelines."

An inspection team from Orange County visited SeaWorld and Disney on Tuesday to see whether proposed plans would be in compliance with guidelines recommended by the US Centres for Disease Control (CDC) and Prevention, officials from the parks told the task force.

Orlando Mayor Jerry Demings said he has sent letters of endorsement for opening the theme parks to the governor's office.

Earlier this month, Shanghai Disneyland became the first of Disney's theme park resorts to reopen, with severe limits on the number of visitors allowed in, mandatory masks and temperature checks.