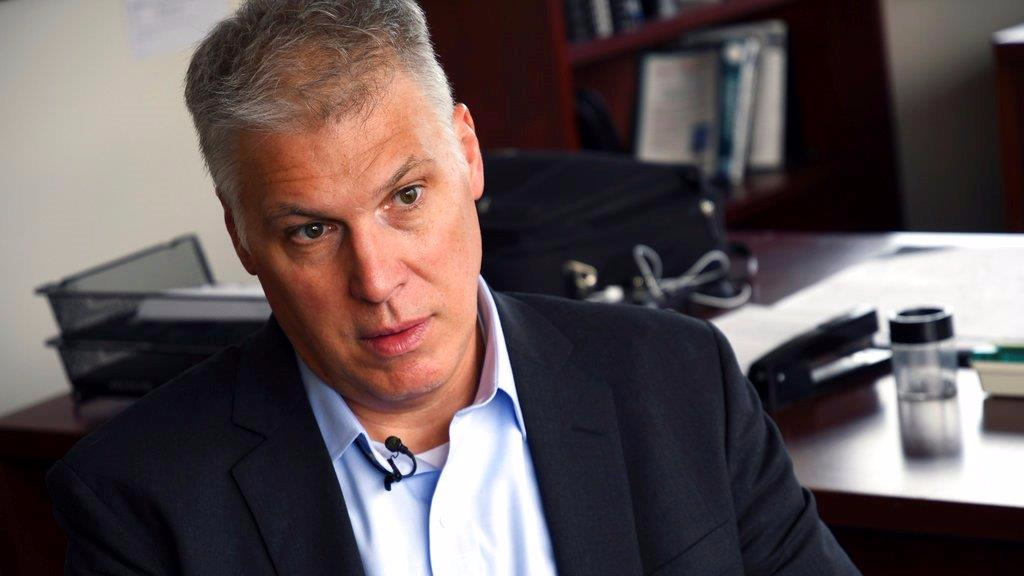 Former radio host David Mueller, who was accused of groping singer Taylor Swift in 2013, pauses during an interview in Denver, Tuesday, Aug. 15, 2017. Mueller said, “I was not pleased with the verdict but I wasn’t surprised,” as he reflected on a verdict from the previous day, which determined he had groped Swift. (AP Photo/Thomas Peipert)

The former radio host who lost a groping lawsuit to Taylor Swift in federal court this week said he realizes the case was in the pop star's favor, but he had no interest in backing down.

David Mueller told The Associated Press on Tuesday that someone he knew suggested he pull out of the case early, but he refused.

"I knew that I couldn't go on with my life without representing myself," he said. "I'm never going to back down."

A six-woman, two-man jury determined Monday that Mueller groped Swift during a photo op before a concert in Denver in 2013. In keeping with Swift's request, they awarded her $1 in damages — an amount her attorney, Douglas Baldridge, called "a single symbolic dollar, the value of which is immeasurable to all women in this situation."

Mueller said he is thinking of giving Swift a Sacagawea dollar because the Native American is a prominent female.

"I mean if this is all about women's rights. ... It's a little poke at them, a little bit," he said. "I mean, I think they made this into a publicity stunt, and this is my life."

Swift's team initially tried to keep the accusation quiet by not reporting the incident to police, and instead contacting Mueller's bosses.

But it became public when Mueller sued Swift for up to $3 million, claiming her allegation cost him his $150,000-a-year job at country station KYGO-FM, where he was a morning host.

After Mueller sued, Swift countersued for assault and battery. During an hour of testimony last week, she blasted a low-key characterization by Mueller's attorney, Gabriel McFarland, of what happened. While Mueller testified he never grabbed Swift, she insisted she was groped.

"He stayed attached to my bare ass-cheek as I lurched away from him," Swift testified.

"It was a definite grab. A very long grab," she added.

Mueller emphatically denied reaching under the pop star's skirt or otherwise touching her inappropriately, testifying he touched her ribs and that his hand may have brushed the outside of her skirt as they awkwardly posed for the picture before Swift's performance at an arena.

That photo was virtually the only evidence besides the testimony.

In the image shown to jurors during opening statements but not publicly released, Mueller's hand is behind Swift, just below her waist. Both are smiling. Mueller's then-girlfriend is standing on Swift's other side.

"I don't even know what to think of the photo. Everyone looks at it, and they see different things. It's like a Rorschach," Mueller said, referring to a psychological test that uses inkblots to gauge a subject's perceptions. "I look at it. I know what happened. To me, it's an awkward photo."

Swift testified that after she was groped, she numbly told Mueller and his girlfriend, "Thank you for coming," and moved on to photos with others waiting in line because she did not want to disappoint them.

But she said she immediately went to her photographer after the meet-and-greet ended and found the photo of her with Mueller, telling the photographer what happened.

Swift's radio liaison, Frank Bell, said he emailed the photo to Robert Call, KYGO-FM's general manager so Call could use it in his investigation of Mueller. Bell testified he did not ask for Mueller to be fired but that "appropriate action be taken."

U.S. District Judge William Martinez last Friday dismissed claims that Taylor Swift ruined Mueller's career, ruling that Mueller's legal team failed to present evidence that the then-23-year-old superstar did anything more than report the groping to her representatives, including her mother.

Photograph is among the key evidence in Taylor Swift trial