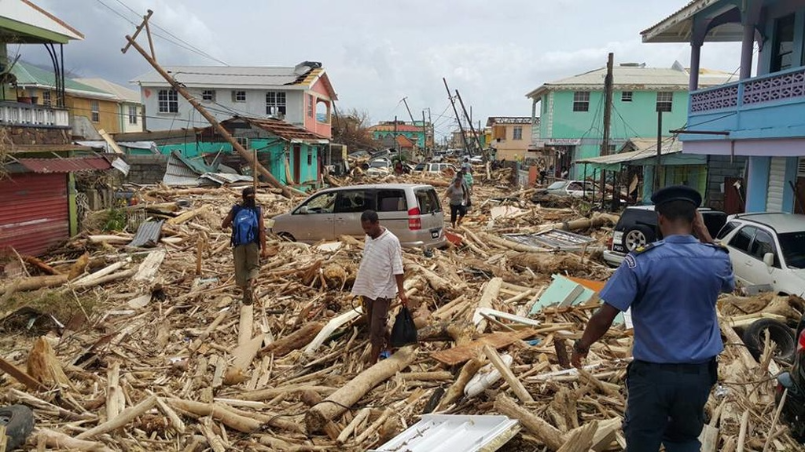 People in Dominica are describing horrific conditions on the island in the wake of the catastrophic Hurricane Maria.

One woman in Roseau, who is pregnant, posted on Facebook on Friday:

“People it's getting really bad here!! Looters are no longer interested in food but instead they are breaking into everything. They ransacked a computer shop today.

“I am trying to get my family and myself out as there is no guarantee that we will receive any relief when it gets to Dominica! No one has passed by houses to confirm who lives there and what supplies are needed. Every man jack for themselves. I witnessed upstanding people in society loot and at this point that seems to be the only mode of survival.”

“The police cannot contain the lawlessness going on in the Capital. There are policemen everywhere but even they are getting attacked. The curfew of 4 pm is in place but some people are not respecting it.

The smell of death lurks everywhere as animals that died during the hurricane are decomposing plus the scent of toilets that have not been flushed cover the air you breathe.

"I have two bottles of drinking water left, biscuits, milk for 2 days and oats. We will only last two days!”

Her description of how the situation was breaking down was chilling: “Right now I see one of three things happening 1. Getting killed by looters 2. Starving to death! 3. Dying for lack of medical care.”

She gave another update this morning:

Meanwhile, Barbadian economist, Jeremy Stephen, was one of several foreign nationals evacuated on Friday by the Barbados Defence Force. He posted an impassioned video to Facebook this morning as he described a country in “crisis mode”.

A shell-shocked Stephen said he did not want to relive the night of the hurricane, but what he witnessed in the days following the storm has left him worried for the fate of those still in Dominica.

Highlighting the isolation of some communities due to Dominica’s terrain, Stephen said, “A lot of people will be left to starve to death, basically. I had to leave Dominica with that reality in mind.”

He said he is concerned about public health as clean drinking water and food is scarce and the distribution of relief items was trickling out of Roseau to surrounding areas.

Stephen recalled witnessing thousands heading into the capital on foot the morning after the hurricane passed and leaving again with an array of items like Johnny Walker whiskey, golf clubs and weed-whackers.

He added he believes things will spiral out of control if the authorities do not get a handle on the situation, noting that persons are resorting to violence and threats of violence to acquire items.

“People were looting like crazy! Everyone went into survival mode,” he said. “All I could see in these people’s eye was opportunity and desperation.”

Stephen urged people in his native Barbados to give full support to the Barbados Defence Force, which is part of the Regional Security System (RSS) personnel in Dominica to bring relief and maintain law and order.

“The best we can do is to send relief and send it fast…don’t even hesitate,” he urged.