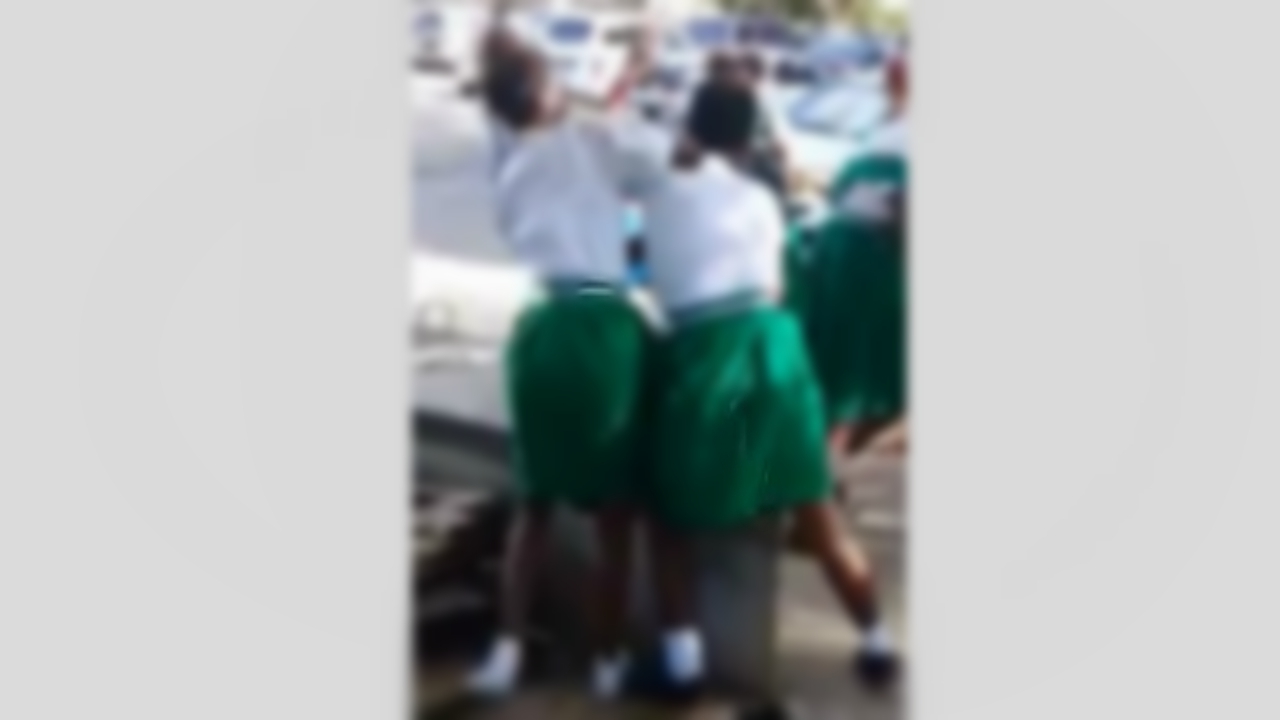 A still from a recent video of students fighting in Barbados.

Hold students accountable, but don't deny the unbearable situations and destructive examples which have led to many of the reckless actions of some young persons.

That is the assertion of founder and director of I Am A Girl Barbados, Alian Ollivierre.

The youth advocate who continues to work to better the lives of girls throughout the island and the Caribbean, told Loop that persons must look beyond the actions of the island's boys and girls, if the society is to reverse what many believe is an increasing surge of violent behaviour among youth.

Such violence has been very evident in four recent incidents which generated much discussion among Barbadians: a students' finger being severed during an altercation at school; a video of a girls' hair being set on fire by a male student; a bloodied fight between two girls; and today's news that four students were wounded in a stabbing incident.

She stressed that while we are not fully aware of the home, school or community life of many of these youth, "it is important to understand that many incidences stem from something or because of some underlying issue."

Speaking of girls specifically,  Ollivierre, condemned the culture of silence or acceptance in Barbados, that encourages young women not to stand up against situations of abuse and violence within their personal life. In fact, she noted that sometimes parents are involved in taking advantage of their children, resulting in the pain and anger which is reflected in some of the incidents which make the news:

"We live in a Barbadian society now that downplays what many girls are going through - from incest to sexual trafficking, to rape, forced prostitution, and the list goes on.

"We have parents and family members who are the ringleaders behind these issues, because their daughters or girls are their money earners, breadwinners, or pleasure puppets. We have officials who contribute to these issues because when a girl goes to look for help they are asked what were they wearing, and are blamed for these occurrences."

She urged each Barbadian to recognise that they have a role to play by not strictly focusing the conversation on what is happening, but on what has happened to lead to that point. The youth advocate believes that this is how real change can happen in the society, as persons address the issues which are causing young men and women to react negatively:

"So what would be more pleasing for the society, is if we could stop covering up stories we hear, actually hold men and women accountable for their disservice to our youth, especially those in authority who are meant to protect, and build legislation that makes sense and processes that do not take 20-plus years to be resolved."

"When I see a fight, I see many sides of different stories, because everyone has one. However, what I never see is how we as a society will ensure that despite their shortcomings, we will show them love, provide them with tools of empowerment and determine the best solutions forward because we have figured out the root cause."

Ollivierre will like to see a shift in culture so that children can get the help they need, and it all relates to building their sense of self-worth:

"We tend to care more about what others would think, as opposed to soliciting the assistance needed to function as all-round healthy individuals. And if adults are incapable, in many case, to do so, it is impossible to ask the same of children., especially since they need permission to engage in such."

When asked if she agreed with the belief that there is an increase in violent behaviour among today's youth, she said that the "'turn for the worst' is excessively stated.

"Fighting is nothing new. I do agree, there has been an influx of video footage amounting with the imagery of girls' anger heightening and I am also aware that more and more, some girls are failing to control their actions; however, in reality, we are only more aware as a society about it because of the internet, and 'smart' phones. That is the culture they are growing up in and that to me is all that has truly changed. Fighting with rocks, knives and many other clever weapons, I have grown up seeing myself, so it is nothing new.

"I think what is more alarming is that within such a heightened level of educational standing and sense of awareness of issues such as depression, suicidal thoughts, abuse, violence and sexual assault, just to name a few, we don't have more preventative measures in place for mental health or comprehensive interventions to determine route causes for such rage."

She is therefore calling on average Barbadians and authority figures alike, to change the standard approach to this topic and seek to make an impact that will bring about positive change.

Outreach to girls spreading from Barbados to the Caribbean