Essential services being restored in Dominica 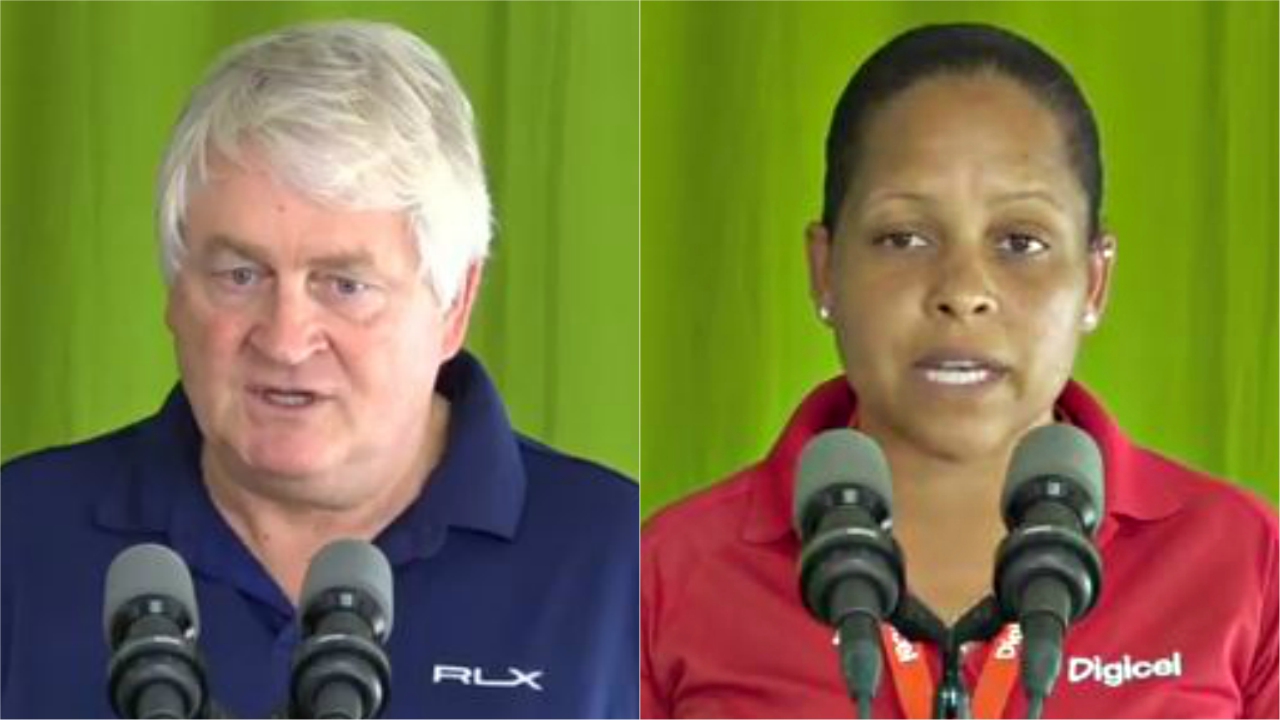 Chairman of Digicel, Denis O'Brien and CEO of Digicel Dominica, Nikima Royer, speaking at a national press briefing in Dominica this week.

Dominica’s Prime Minister Roosevelt Skerrit has assured that efforts continue around the clock to restore essential utilities to the island which was ravaged by Hurricane Maria on September 18.

PM Skerrit noted that the state agencies have been making “tremendous progress” in restoring essential services. He expects this progress to continue as more public servants are reporting into work, after the initial shock caused by the hurricane’s devastation.

“[With] No essential services of the State, we’re resting on our laurels. We work 24 hours even during the curfew…the essential services are out working ensuring that when we wake up in the morning, life can be a little better for all of us.”

He was speaking at a press briefing on Wednesday morning in Roseau, where he was joined by senior officials from private utility companies, including telecommunications provider, Digicel, who PM Skerrit said has been an “extraordinary philanthropic entity.”

Indicating that Digicel will be assisting Dominica beyond restoring its telecoms services, Chairman Denis O’Brien announced that the company will focus its relief efforts in the south-east of the island, including the Kalinago territory, where the indigenous people reside.

This includes bringing in materials to help rebuild homes and schools, with Digicel teams preparing to conduct field assessments and engage with members of the community to identify their needs.

CEO of Digicel Dominica, Nikima Royer, noted that as of Monday, September 25, there are four operational cell sites, which are providing coverage from Point Michele to St Joseph.

It was expected that two additional sites would be operational by Wednesday afternoon.

“We expect to have 17 mobile cell sites on island in the coming days to deploy into strategic points in tandem with the restoration efforts currently ongoing on the ground on our towers and our sites,” Royer outlined.

She noted that a Digicel team was on the ground within hours of the all-clear after the passage of Hurricane Maria and the company has also been providing significant resources to national relief efforts.

She noted, “In addition to technical teams, we have brought in doctors, psychologists, plumbers, electricians, builders, masons and tradesmen to assist in the effort.”

Digicel has also made its resources available to evacuate over 30 people needing medical attention.

It was reported that power has been restored to the Princess Margaret Hospital and efforts are being focused to restore power to the commercial sector.

Water supply has been restored in several areas around the island due to the combined efforts of villagers, police and DOWASCO staff, with the greater Roseau area to be restored by the end of this week. However, some more hard-hit areas may not see water supply restored before mid-October.

In addition, multiple assurances were given that there is no shortage of petroleum products in Dominica.

PM Skerrit: Supplies will get to all Dominicans

Over 100 persons evacuated from Dominica by Barbados Coast Guard