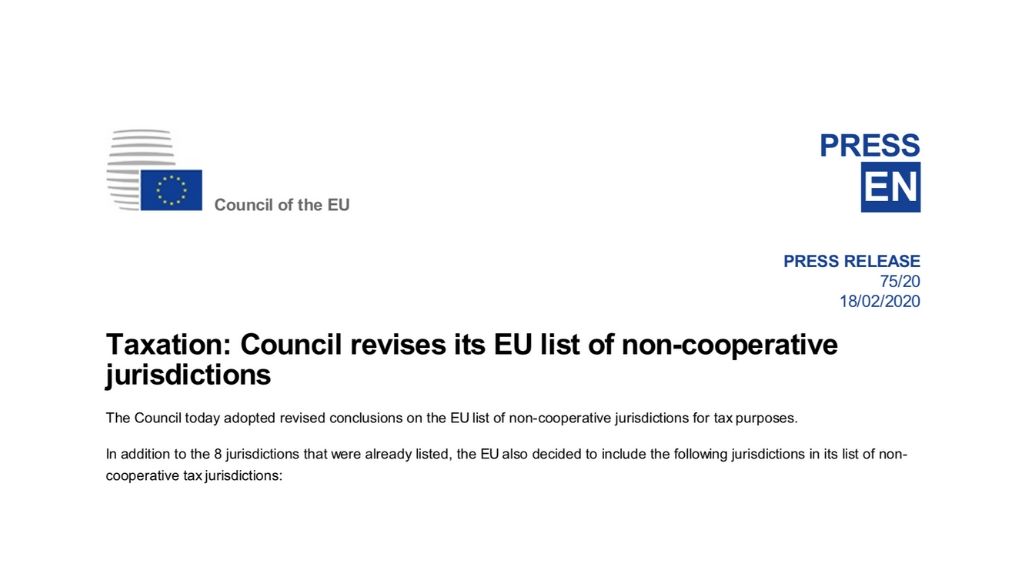 Press release from the EU Council

Barbados has done the work to implement all the necessary reforms to comply with European Union (EU) tax good governance principles ahead of the agreed deadline and is no longer considered as a jurisdiction with outstanding commitments.

These jurisdictions did not implement the tax reforms to which they had committed by the agreed deadline.

'The work on the list of non-cooperative tax jurisdictions is based on a thorough process of assessment, monitoring and dialogue with about 70 third country jurisdictions. Since we started this exercise, 49 countries have implemented the necessary tax reforms to comply with the EU's criteria. This is an undeniable success. But it is also work in progress and a dynamic process where our methodology and criteria are constantly reviewed."

The list of non-cooperative tax jurisdictions, which is part of the EU's external strategy for taxation as defined by the Council, is intended to contribute to ongoing efforts to promote tax good governance worldwide.

It was first established in December 2017 and is based on a continuous and dynamic process of:

The list includes jurisdictions that have either not engaged in a constructive dialogue with the EU on tax governance or failed to deliver on their commitments to implement reforms to comply with the EU's criteria on time.

Jurisdictions that do not yet comply with all international tax standards but committed to reform are considered cooperative and included in a state of play document (Annex II). The Council's code of conduct group on business taxation monitors that jurisdictions enact the necessary reforms by the agreed deadlines. Once a jurisdiction meets all its commitments, it is removed from Annex II.

Council of the EU

The Council today adopted revised conclusions on the EU list of non-cooperative jurisdictions for tax purposes.

Most commitments taken by third-country jurisdictions were with a deadline of end 2019, whilst their enactment in national law was carefully monitored at a technical level by the Code of Conduct Group on business taxation until the beginning of this year. The Council adopted the revised EU list of non-cooperative jurisdictions resulting from this exercise and endorsed a revised state of play with respect to pending commitments.

The Council will continue to regularly review and update the list in the coming years, taking into consideration the evolving deadlines for jurisdictions to deliver on their commitments and the evolution of the listing criteria that the EU uses to establish the list.