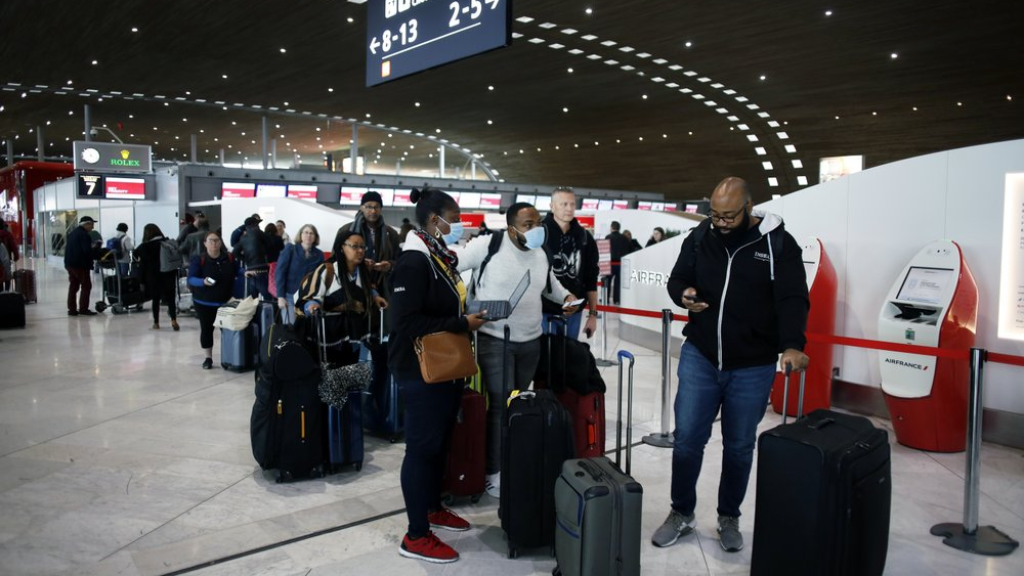 Passengers wait in front of the desk of Air France at the Roissy Charles de Gaulle airport, north of Paris, Thursday, March 12, 2020. The European Union on Thursday will evaluate President Donald Trump's decision to restrict travel from Europe to the United States amid deep concern over the economic impact of the move with markets already heavily hit by coronavirus. (AP Photo/Thibault Camus)

The European Union on Thursday lashed out at President Donald Trump's "unilateral" decision to restrict travel from Europe to the United States over the coronavirus, saying that the illness doesn't respect borders.

Trump has called the disease a "foreign virus" and claimed that US clusters were "seeded" by European travellers. He announced that all European travel would be cut off, but US officials later said that restrictions would apply only to most foreign citizens who have been in Europe's passport-free travel zone at any point for 14 days prior to their arrival to the United States.

"The European Union disapproves of the fact that the US decision to impose a travel ban was taken unilaterally and without consultation," European Council President Charles Michel and European Commission President Ursula von der Leyen said in a joint statement.

"The coronavirus is a global crisis, not limited to any continent and it requires cooperation rather than unilateral action," the two said.

They rejected Trump's suggestion that Europe is not doing enough to combat COVID-19, saying that the 27-nation bloc "is taking strong action to limit the spread of the virus."

The so-called Schengen area comprises 26 countries including EU members France, Italy, German, Greece, Austria and Belgium, where the bloc has its headquarters, but also others like Switzerland, Norway and Iceland.

The restrictions announced by Trump don't apply to the United Kingdom, where the number of confirmed cases has reached 460, or Ireland, which isn't part of Schengen.

According to flight tracker FlightAware, around 400 flights cross the Atlantic from Europe to the United States each day.

The unprecedented measure is one of many taken by Trump since he came to office that appears to target the EU, a major trading partner with several member countries that are also US allies in NATO.

But Trump is also an ally of Prime Minister Boris Johnson and supported Britain's departure from the EU. The US leader also owns three golf resorts in the U.K. and Ireland.

Asked what immediate action the EU might take in response, commission spokesman Eric Mamer said that the EU "isn't in the habit of shooting from the hip."

According to the European Centre for Disease Prevention and Control's latest figures, more than 22,000 cases of COVID-19 have been confirmed across Europe, and 943 people have died on the continent.

For most people, the new coronavirus causes only mild or moderate symptoms, such as fever and cough. For some, especially older adults and people with existing health problems, it can cause more severe illness, including pneumonia. The vast majority of people recover from the new virus.

With the virus now present in all 27 EU countries, the bloc's top officials have pledged to stand united in fighting the disease and are likely to adopt a common approach in their response to Trump's announcement.

This week, von der Leyen announced the launch of a "corona response investment fund" seeded with 7.5 billion euros that she said would reap billions more. It's aimed at propping up health care structures, small businesses suffering from the impact of the virus and labour markets where jobs might be hit.

Von der Leyen postponed a trip Thursday to Greece to discuss the migrant stand-off with Turkey in order to focus on combating the rapid spread of the virus.

Several EU meetings have been cancelled to slow the spread, but the bloc's interior ministers are still scheduled to gather in Brussels on Friday. EU health ministers were holding a video-conference later Thursday.

As the virus spreads, more European countries are adopting drastic measures. After Italy entered a lock-down, Denmark said all schools and day-care facilities will be closed from Monday. All public servants who don't perform critical functions, have been ordered to stay home for the next two weeks.

Kes the Band under new management to expand global presence