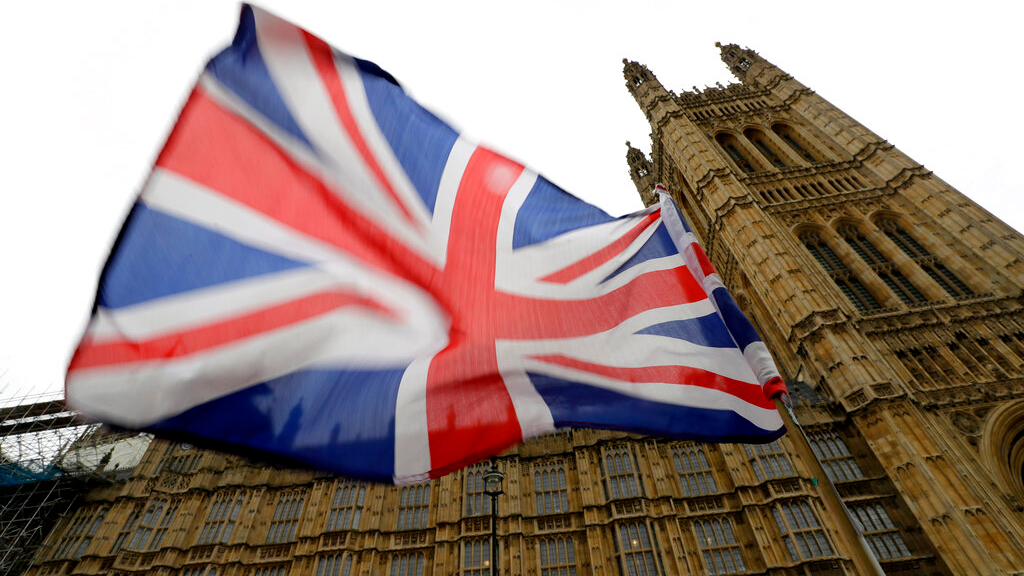 A Union flag flies in front of Parliament in London, October 25, 2019. Politicians in Britain and the European Union seem to be looking to each other to break the Brexit deadlock. (AP Photo/Kirsty Wigglesworth)

European Union ambassadors agreed Friday that the bloc should grant Britain's request for another extension to the Brexit deadline but they have not yet figured out how long that delay should be.

Speaking Friday in Brussels after EU ambassadors met with the EU chief Brexit negotiator Michel Barnier, European Commission spokeswoman Mina Andreeva said ambassadors from the EU's 27 other nations accepted the terms of an extension and their "work will continue in the coming days."

Two European diplomats said the ambassadors would meet again early next week. Andreeva hinted that the EU would not hold a special summit on Brexit to approve the extension, saying the decision will likely be made in a statement.

"We are not very far, and there is no doubt we will find a deal early next week," one diplomat said. The person, who asked not be identified because talks are continuing, added that the ongoing debate in Britain over Prime Minister Boris Johnson's request for a general election could have an impact on the length of the delay.

Britain is scheduled to leave the 28-nation bloc on October 31 but has asked for a three-month extension to that deadline as Johnson struggles to get lawmakers to pass his Brexit divorce deal. Economists say a no-deal departure would hurt both the UK and the EU economies.

France, among other EU nations, has been reluctant to approve a long Brexit extension, saying Britain must present "a clear scenario" for progress before another Brexit delay is granted.

Those comments followed Johnson's decision Thursday to push for an early election to break the stalemate in Parliament that has blocked a Brexit deal. Johnson said he would ask lawmakers to vote Monday on calling a general election on December 12.

To call an election, Johnson, who leads a minority government, must win support from two-thirds of the House of Commons. But opposition parties say they won't vote for an early election until the government secures an extension of the Brexit deadline.

Britain's biggest opposition party has gone a step further, saying it will block plans for an early election unless Johnson eliminates the possibility of leaving the EU without a deal.

Diane Abbott, of the Labour Party, told the BBC her party wants an "explicit commitment" that there won't be a no-deal Brexit, "because we don't trust Boris Johnson."

Until recently, Johnson vowed that Britain would leave the EU on October 31 no matter what, with or without a deal, saying this was the only way to put pressure on European officials to make concessions.

Johnson insisted on Friday that British lawmakers need to commit to the December 12 date for the election "to have any credibility about delivering Brexit."

"So that's what we're pushing for," he said.

Johnson last week secured a new deal with EU leaders, but British lawmakers refused to approve it before an October 19 deadline imposed by Parliament. That forced him to ask the EU to extend the Brexit deadline to the end of January.

Sajid Javid, Britain's treasury chief, said he believes the EU will ultimately approve a three-month extension. He said the only way to break the country's political logjam was to call a new election and get rid of what he called the current "zombie Parliament."