EU: Possible virus drug approval 'before the summer' in early 2021 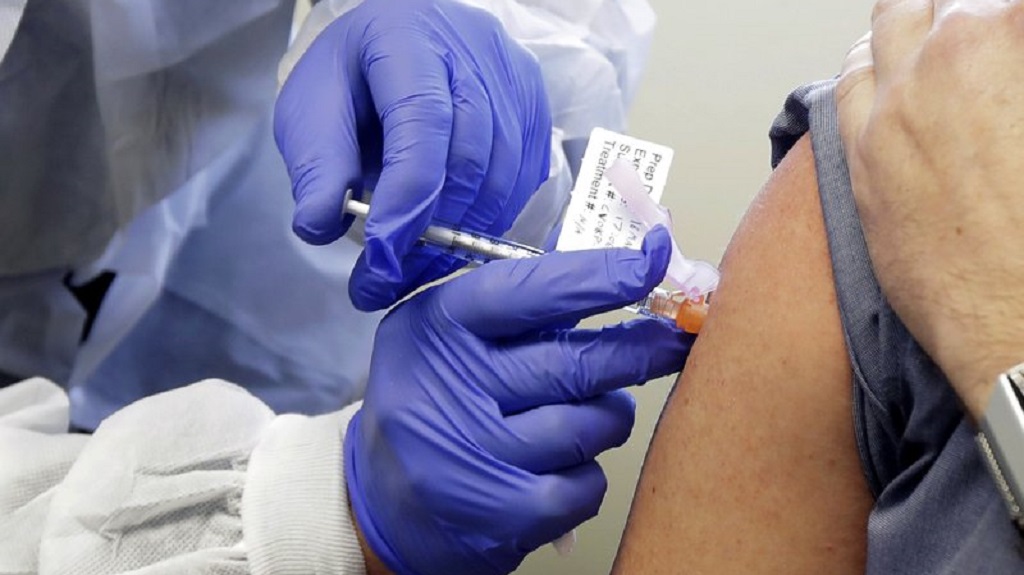 FILE - In this March 16, 2020 file photo, a patient receives a shot in the first-stage safety study clinical trial of a potential vaccine for COVID-19, the disease caused by the new coronavirus, at the Kaiser Permanente Washington Health Research Institute in Seattle. (AP Photo/Ted S. Warren, File)

The European Medicines Agency predicted that there could be licensed drugs to treat the new coronavirus in the next few months and that a vaccine might even be approved in early 2021, in a "best-case scenario."

Dr Marco Cavaleri, who heads the European regulator's vaccines department, told a media briefing on Thursday that approving medicines to treat COVID-19 might be possible "before the summer," citing ongoing clinical trials.

Recent early results for the drug remdesivir suggested it could help patients recover from the coronavirus faster, although longer-term data is still needed to confirm any benefit.

Although it typically takes years to develop a vaccine, Cavaleri said that if some of the shots already being tested prove to be effective, they could be licensed as early as the beginning of next year.

Cavaleri cautioned, however, that many experimental vaccines never make it to the end and that there are often delays.

"But we can see the possibility that if everything goes as planned, vaccines could be approved a year from now," he said.

More than 140 heads of states and health experts, including South African President Cyril Ramaphosa, Pakistani Prime Minister Imran Khan and Nobel laureate Joseph Stiglitz issued an appeal Thursday calling on all countries to unite behind a "people's vaccine" against COVID-19, to ensure any effective treatments and vaccines be available globally to anyone who needs them, for free.

At the moment, there are about a dozen vaccine candidates being tested in China, Britain, Germany and the US The World Health Organization has estimated it could take about 12 to 18 months for an effective vaccine to be found.

While some experts have proposed dropping the requirement for large-scale advanced clinical trials altogether, Cavaleri said that wasn't currently being considered.

"Our current thinking is all vaccines under development should undergo large phase 3 trials to establish what is the level of protection," he said.

But he acknowledged that could change if the situation worsened.

"Things may evolve as the pandemic will evolve and we will see if we need to do something else," Cavaleri said.

Some officials have warned that a vaccine might never be found; previous attempts to develop a vaccine against related coronaviruses like SARS and MERS have all failed.

But Cavleri was optimistic an immunisation against COVID-19 would eventually be discovered, as there are various technologies being tried globally.

"I think it's a bit early to say, but we have good reason to be sufficiently optimistic that at the end of the day, some vaccines will make it," he said.

UK expected to stick to lockdown as Johnson outlines future