Skip to main content
Breaking News |
United Airlines ramps up flights to Latin America & Caribbean
Pandemic air travel milestone; 1 million passengers screened
It's prime time: Digicel steps out as a Digital Operator
No tests required from CARICOM bubble travellers to St Kitts and Nevis
TS Epsilon expected to be at or near hurricane strength by Wednesday
Survey finds huge demand to travel next year
British Airways urges introduction of pre-flight COVID testing regime
CNN analyst on leave after exposing his penis during Zoom meeting
Ashanti celebrates fabulous 40 in Antigua: Say less!
Coronavirus cases in the Caribbean as of October 19 at 11am: 225,875

Excellence is by design not accident, says Kathie Daniel 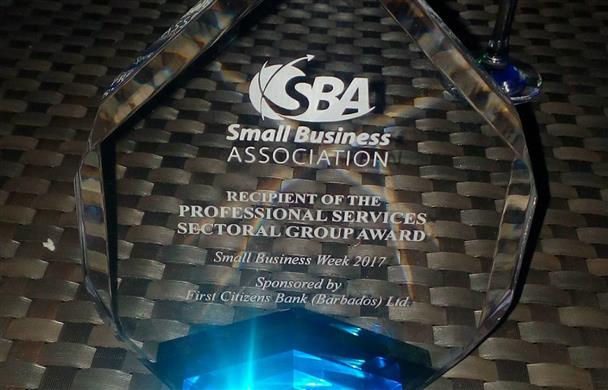 Those four words, said with no care by entrepreneurs and small business owners in Barbados, make entrepreneur Kathie Daniel cringe. They annoy her greatly because she firmly believes that good communication is where excellent service starts.

She has been nominated previously in varied categories but never took home an award, so at the end of the awards’ night, this achievement left her awestruck. The day after the awards she was still saying, “I was overjoyed. I’m still overjoyed and part of me is still going, woooow!”

But Kathie knows that she put in the work and is reaping the rewards of her hard labour. “The motto of the business is excellence by design and this goes back to, wow, as early as I can remember, wanting to do my best, wanting to be the best.”

Competitive by nature, the Queen's College almunus told Loop that in the business sector in Barbados, in the services sector, the way to compete is by providing excellent service. “My core business, the graphic design, I am, it’s such a subjective thing. I know there will always be better graphic designers than myself. I am not so egotistical to think that oh my stuff is the greatest, nobody can ever do anything, that is folly! What I will endeavor to provide though is the best customer service, and unfortunately in Barbados, it is not that hard to provide exceptional customer service.”

Looking around at how others handle or mishandle business, she said that for a service-oriented and tourism-based economy, “we really, really need to step up our game.

“I have encountered people who proudly boast, ‘Oh I don’t check my emails!’ You know the emoji with the two eyes that looks at you sideways? That’s me when I hear that!”

With a degree in Communications and Design, she said that maybe her foundation is what sets her apart. She holds true to the ideology that “communication is where it all starts. Providing a service, you need to understand what your customer needs. Not what they want, you know? Because sometimes what they want and what they need are two different things, so again the communication has to come in.”

Kathie thanked the Small Business Association (SBA) for creating the nurturing environment for microenterprises to grow. She highlighted the offered classes in Bookkeeping, Accounting and more, and their workshops. She asserted it is up to entrepreneurs to take the opportunities and go. She also said that she attributes her win and a large part of her success in this past year squarely at the foot of ActionCoach and SBA. Noting that the SBA is a training centre for the TVET Council for the CVQs, she shared that her group was probably the first to do the CVQ in Starting and running a new or existing business enterprise. “That was a major success. I learned so much. When I was called for these awards and had to present financial statements for the last couple of years and I said, ‘Wow!’ It was a seriously upward trend. I’m like pretty darn good. It was those principles that I learned and put into practice.”

Furthermore, she said that as it relates to youngsters coming up in Barbados now, they should not neglect or ignore the vocational qualifications. She said that TVET has a lot of vocational training to catch those who slipped through the academic cracks. And though she said that academics has its role to play, she added, “Unfortunately, I know a lot of unemployed graphic designers, underemployed doctors and lawyers, but I don’t know any unemployed or underemployed electricians, automechanics, plumbers, all these things.”

In terms of advice for the youth, she urged, “So I think if someone is coming out of school and not quite sure what they want to do, ‘cause I always knew - there was no choice for me, it was hardwired into me, it had to be Art and creativity, but everybody does not have that mixed blessing. So I would say look around you. Get some skills that are transferable. Become computer literate. Become comfortable with the technology. A lot of people, not just youngsters are good at fixing things. As long as we have our machines and whatever, we will need people to repair them. Consider renewable energy. Get into that. Find out how that works… I would tell the youngsters coming up, and I’m borrowing this, it is something I heard on the radio, look around and imagine a job that does not exist now but will exist in 10 years. Just let your imagination roam. Computer literacy, communication, just good work practices like checking your email and responding, listen, be humble, be willing to learn and be willing to change.”

Kathie knows her perspective may not always be the popular one, but she believes strongly that customer service and service excellence in Barbados would also benefit from young entrepreneurs travelling and living abroad for some period of time. She suggested that the different cultures and business acumen, as well as the work ethic that they could learn, would be priceless.

Looking at herself as an example, she said that in her first year when she was studying and living in Canada she went to catch the bus and was late and had to stand in the freezing cold for extra time. “It was -28 degrees Celsius. That was the first and last bus I ever missed.”

Kathie said she truly does not know if the entrepreneurial spirit can be taught but considering that we live in a global village, she insisted, “we in Barbados have a lot of work to do to get back to where we should be and to ensure that we create the nurturing environment necessary for our young people.”