Skip to main content
Breaking News |
Staff quarantined onboard Royal Caribbean ship rescued from Barbados
Shaggy makes US visa appeal for Bounty and Beenie
Coronavirus cases in the Caribbean as of May 25 at 3 am: 23,581
Boy, 16, held in relation to killing of girl, 8, in Jamaica
Murders up almost 100 per cent this year in St Ann Division in Jamaica
Who won the Bounty Killer VERZUZ Beenie Man clash?
No new COVID-19 cases for May 24
Trump declares churches 'essential,' calls on them to reopen
Last seen nine days ago, mum reports teen son missing
UPDATE: Former MP regrets endorsing new MP in St Philip South 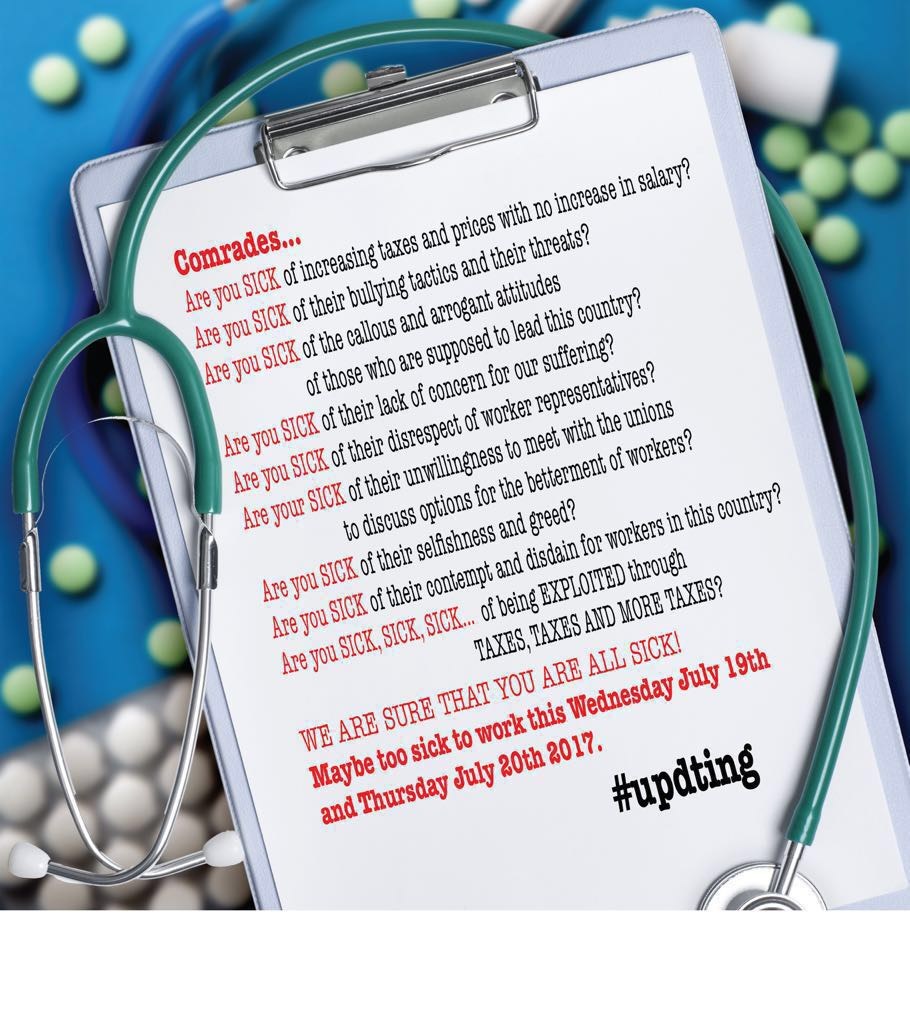 One of the messages being circulated by shop stewards.

As a coalition of unions continues their efforts to have the Barbadian Government reduce the National Social Responsibility Levy (NSRL), which was increased from two percent to 10 percent on July 1, they are calling on members to take part in a sick-out today.

This after the leaders of the country’s largest trade unions gave the Government a 48-hour deadline to respond to their request to reduce the NSRL, after their ‘Walk 4 Relief’ last Thursday - a demand which Prime Minister Freundel Stuart has not responded to directly so far.

The Barbados Workers’ Union (BWU), Barbados Union of Teachers (BUT), National Union of Public Workers (NUPW) and Barbados Secondary Teachers Union (BSTU), called on "all union members and other Barbadians who care about the direction in which this country is going... to join with us as we begin our protest" on Monday. They have now made good on their promise to continue to "updting" by urging members to join in a sick-out today and tomorrow, as seen in the message circulated by shop stewards last evening:

All private and public sector workers as well as business owners are asked to stay home Wednesday 19th & Thursday 20th July 2017 to signal to the government of Barbados NO MORE TAXES.
#nomoretaxes #stayhome #citizensprotest #unionstrong

While there are unconfirmed reports that this action has already started at the Transport Board, Loop News understands that a shut down is not expected at that entity, the Sanitation Service Authority (SSA) or this island's ports at this time.

An official within one of the largest unions who asked to remain unnamed explained that while there is a call for a sick-out today and tomorrow, it is to monitor the response from workers:

"It is a soft sick-out to see how members will respond. You will not see Transport Board buses shut down as yet, but that will come.

"There is a call for a sick-out, but the port, the bus system or sanitation have not been shut down as yet."

Efforts to reach officials at the Ministry of Transport and Works were unsuccessful.