Expert: New route may have distracted engineer before crash 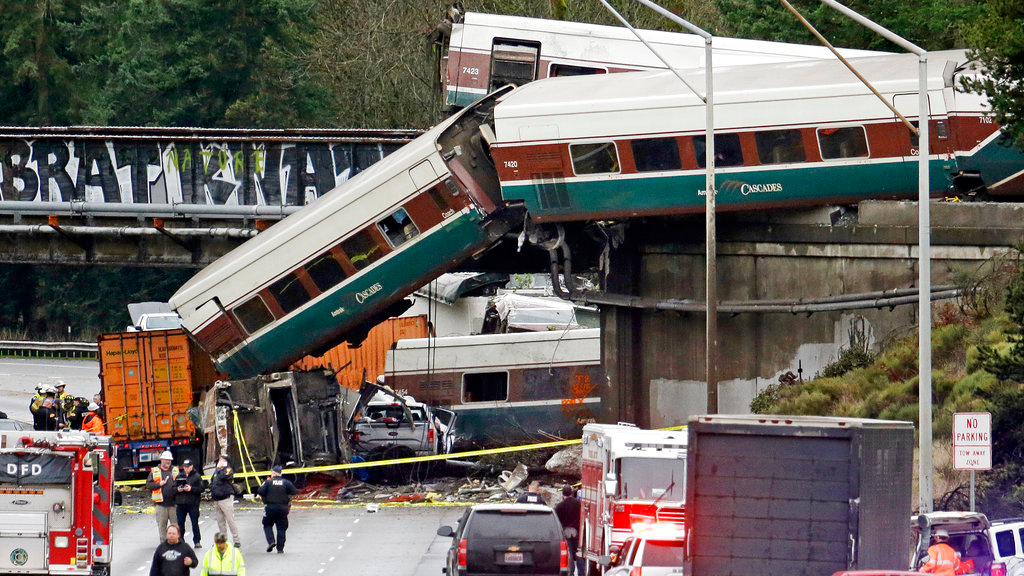 Experts say it's possible the engineer on an Amtrak train that derailed as it hurtled into a curve at more than twice the speed limit was distracted for an extended period of time before the train plunged off an overpass and onto a busy interstate, a key factor in the investigation.

Authorities on Wednesday reopened two southbound lanes of Interstate 5 - the Pacific Northwest's main north-south arterial - that had been closed since Monday's accident as federal investigators focused on whether the engineer's attention was diverted by a second person in the cab, or by something else.

Three men were killed Monday south of Seattle when the train barreled into a 30 mph zone at 80 mph. Southbound lanes of Interstate 5 near DuPont had been closed at the accident ever since.

A conductor in training who was familiarizing himself with the new route was in the locomotive with the engineer at the time. A federal official who was not authorized to discuss the matter publicly and spoke on condition of anonymity said authorities want to know whether the engineer lost "situational awareness" — didn't realize where he was.

Rail-safety experts say that while it is fairly common to have two people in a cab, investigators will look into whether that may have distracted the engineer.

"What interactions were the conductor and the engineer having and did that distract the engineer from his focus on where they were on the route?" said Keith Millhouse, a rail-safety consultant who was former board chairman of Metrolink, Southern California's commuter rail system.

Millhouse said the two could have been having discussions that caused the engineer to not realize where he was on the route.

Investigators had not yet interviewed the train engineer and other crew members — all of whom were hospitalized — as of Wednesday morning, a National Transportation Safety Board spokesman said. Experts say investigators will want to talk to them as soon as possible while the event is still fresh in their memory.

NTSB board member Bella Dinh-Zarr said Tuesday they were in the early stage of the investigation, and authorities won't determine a probable cause while on scene. She said distraction is one of the most looked at priorities, and investigators will be looking at cellphone records of all employees.

Dinh-Zarr also said the engineer did not manually activate the emergency brake, which went off automatically when the train derailed.

"This is a situation where the engineer should have been starting the braking application probably a minute before they reached that curve," said Allan Zarembski, a civil engineering professor who directs the rail engineering and safety program at the University of Delaware.

"It suggests strongly that the engineer was distracted for a fairly extended point of view," he said. The information so far "seems to suggest that there was an operator issue here," he said.

In some previous wrecks, train operators were found to have been seriously fatigued or distracted by a cellphone or something else.

He has said putting multiple crew members in a locomotive was "more of a distraction" than a safeguard.

The former investigator pointed to a deadly 1996 collision near Washington, D.C. between an Amtrak train and a Maryland commuter train that had three crew members in the cab. The engineer of the commuter train was thought to have been distracted by a conversation with the other crew members. The train ran through a speed restriction, reaching 66 mph in a 30 mph zone, and blew through a stop signal before slamming head on into the Amtrak train.

"Conversation creates a potential for distraction and interference with the engineer's retention of information, in this case the signal information," the NTSB wrote in its report on the 1996 crash.

Washington Gov. Jay Inslee said Wednesday that Amtrak President Richard Anderson told him the rail company would pay the costs of the derailment as well as the medical and other expenses of the victims. He also said Anderson would try to ensure a technology can automatically slow or stop a speeding train — known as positive train control — was in place statewide before a Dec. 31, 2018 federal deadline.

That technology was not in use on the stretch of track involved in Monday's crash.

Regulators have been pressing railroads for years to install such technology, and some have done so, but the deadline has been extended repeatedly at the industry's request.

On Wednesday, crews in Washington state removed a train locomotive from the crash site and cleaned up debris before reopening the freeway that typically sees about 60,000 cars a day. The train, with 85 passengers and crew members, was making the inaugural run along a fast, new 15-mile bypass route.

Officials: Why was train in fatal Amtrak wreck speeding?