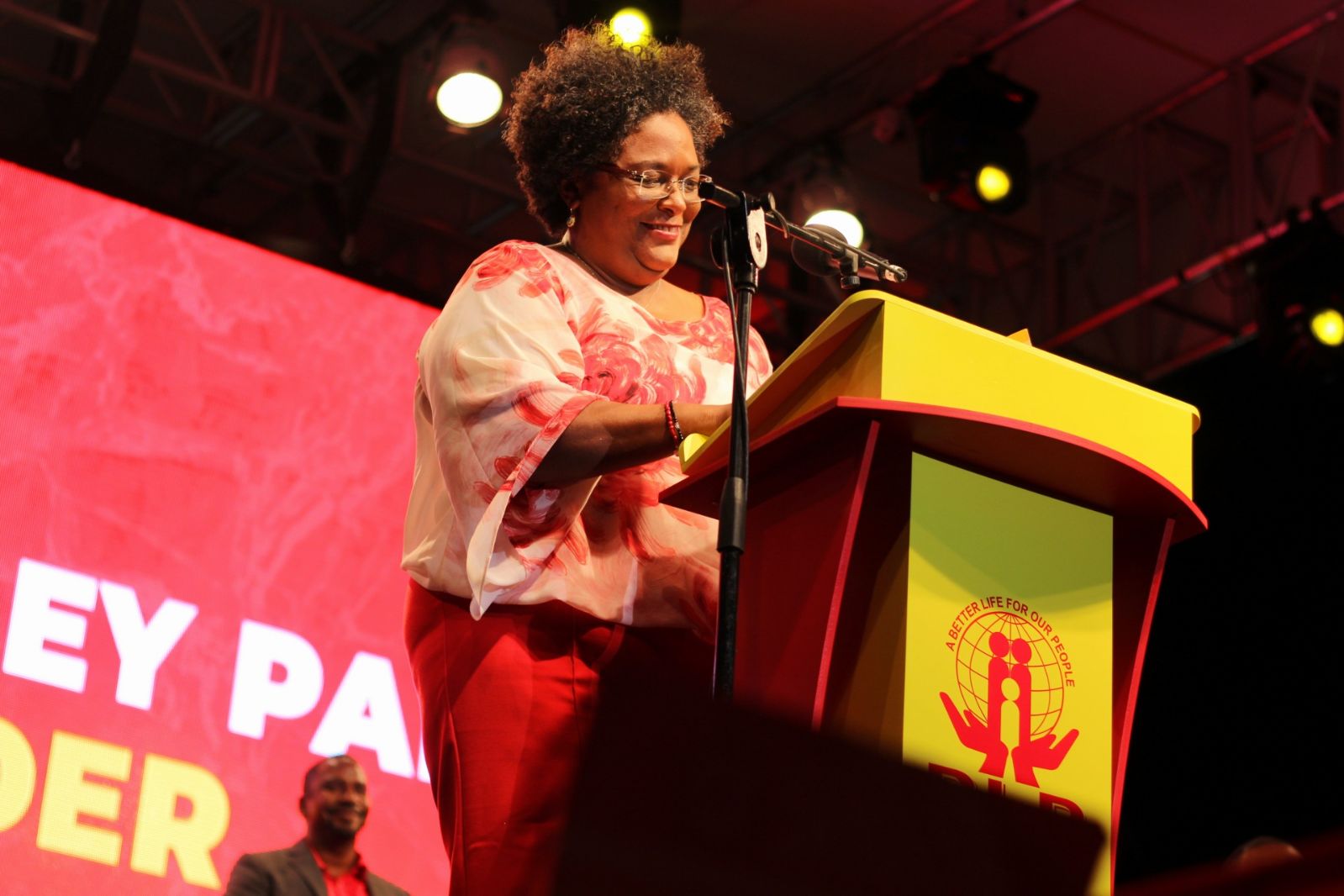 No vending licence? No problem.

No liquor licence, nor public entertainment licence for a small house party or karaoke? No problem.

If the Barbados Labour Party (BLP) wins on May 24, these are two “hoops” that people will no longer have to pass through according to the Leader Mia Mottley.

Related article :Muslim teen, dreaming to be a politician, calls on youth to vote

“We must never make our people criminals for the simple fact of wanting to support their families, and the days of that must be put behind us in this country as a historic relic.”

Yesterday Mottley let the world know that she hates “unfairness” and under a Barbados Labour Party-government there will be no two Barbadoses.

Taking the stage around 9:00 pm last night at Weymouth Grounds to chair the BLP 2018 campaign launch after walking through the massive crowd of thousands wearing red shirts, she said, “I will be fearless!”

Mottley told the people, “We have to share the burden, and we have to share it fairly… I can’t lift a heavy table but we can all lift it together because many hands make…” and the crowd yelled back, “light work.” With a huge smile, she replied, “Sounds as though we got a plan.”

And she went on to say but it is not only “about right and wrong and getting Barbados working for you in the short-term, in the next few months. These are not 2019 plans, these are 2018 [plans]. It is also about fairness and justice.

“There are people in this country who know me well, and they know that the one thing I don’t like is unfairness. I don’t like it, don’t like it. And this notion that… there can be two types of Barbadians is a lot of nonsense.”

Using Contone’s song ‘Come back tomor’ as her basis, she said that “If we gonna tell them we can’t do, tell them we can’t do,” she said that she disapproves of the current administration's’ modus operandi where according to her, people, like Contone, feel as though “they on a layaway plan to get things done in this country. Well, I say no under the Barbados Labour Party to this notion of come back tomor; deal with the people with fairness and dignity.”

The Leader lamented, “We have criminalised entrepreneurship and we have criminalised vending in Barbados…” but she assured vendors, that she cannot now come to a Barbados where mothers, fathers, brothers and sisters can be made a criminal for not having a vendor’s licence; “it is wrong and it will stop!”

“For the ones that are not about a vendor licence, it is the liquor licences. If you want to hold a lil dance, karaoke, the hoops you have to go through in this country between a liquor licence and a public entertainment licence… After May 24th with your help, we will put that behind us too!”

Highlighting the present disparity, Mottley said that what “galls” her is that “they go and pick up the young people in Swan Street”, while persons who commit white collar crimes “can’t face a day, and the people that doing the other nonsense, can’t face a day.

“Tell dem fuh me, if yuh do de crime, yuh gotta do de time. Adonijah there will not be two Barbadoses, and I don’t say this lightly, this is what I will measure myself by and the leadership that I bring to this country because I dislike and abhor unfairness."

She stressed that under her watch, there will no exclusion because of who a person knows and how much money he or she has, “it has to stop, it simply has to stop!”