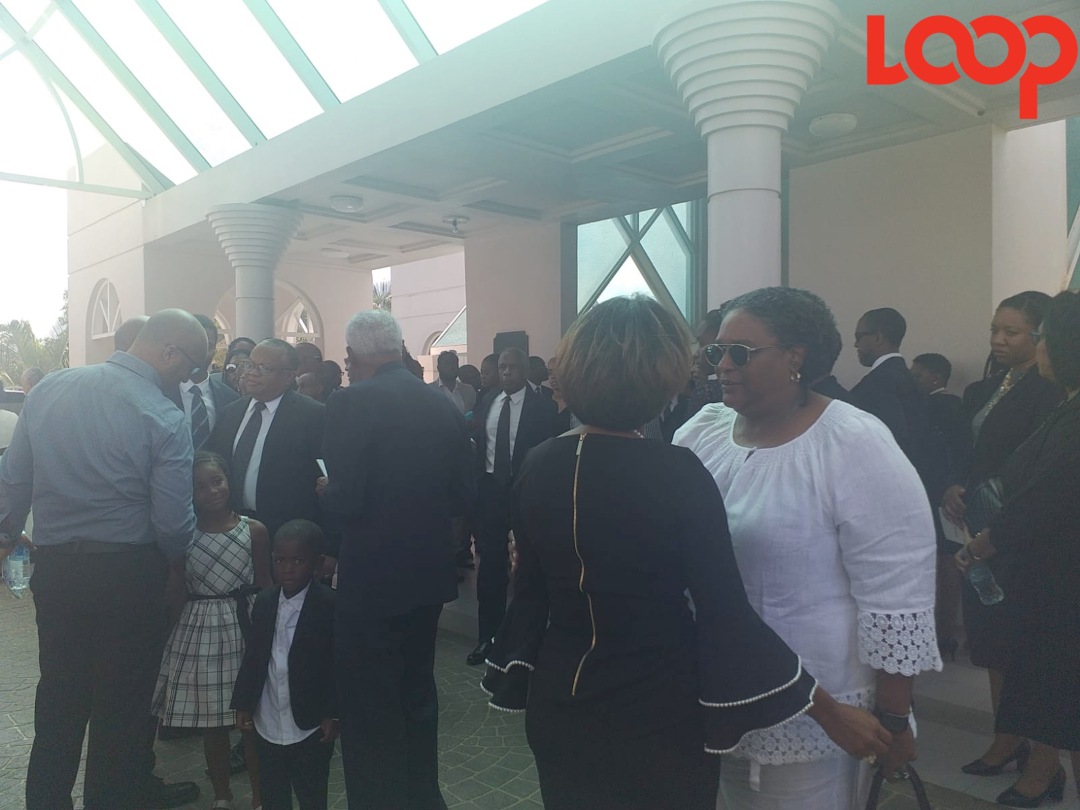 Prime Minister Mia Mottley (in white) and members of Cabinet console family and friends at the end of the funeral service.

A packed Coral Ridge cemetery was filled with family, friends, dignitaries and well-wishers who came to say their goodbyes and pay tribute to the late Lady Beverley Walrond, QC.

Fondly spoken of with teary-eyed joy by those offering tributes, Lady Walrond was adored by many as a wife, sister, mother grandmother, attorney, colleague and friend who gave her time, love and talents to all who needed it.

Reverend Guy Hewitt, in his sermon, urged mourners to not be daunted by the loss suffered at such a difficult time as Christmas and asked them to learn to be vulnerable at this time so they may turn to Jesus.

"Go where there is space enough to place your sorrow. Go to the stable. Return to our savior Jesus Christ." Rev. Hewitt said.

Called to the Bar in the early 1970's, Lady Walrond had practiced law for 49-plus years with a strong reputation within the circles of family law.

She used her legal talent in the area of children's rights with work on developing aspects of the modern Family Law Act as well as being an advocate for the Barbados Child Care Board and a family division in the high court.

Lady Walrond became the first female president of the Barbados Bar Association and was adamant that they should stay nonpartisan in its approach to political matters. It was noted that Lady Walrond's work on family cases such as Proverbs v Proverbs, the locus classicus in property law, Farrier v Farrier have left a lasting impact on the legal fraternity in Barbados and the Caribbean.

She has also done work for the Bar Council, Judicial Council, Council of Legal Education, Chair of the Insurance Corporation of Barbados and Erdiston Teachers College, Director of the Barbados Board of Tourism, member of the Prison Advisory Board and acted as High Court Judge on two occasions.

Following her marriage to Barbadian Surgeon Sir Errol "Micky" Walrond, she relocated to Barbados and joined the civil service where she worked as crown counsel and senior crown counsel. She returned to private practice in the law firm of Smith and Smith prior to joining the chambers of Sir Maurice King Q.C.

May she rest in peace.