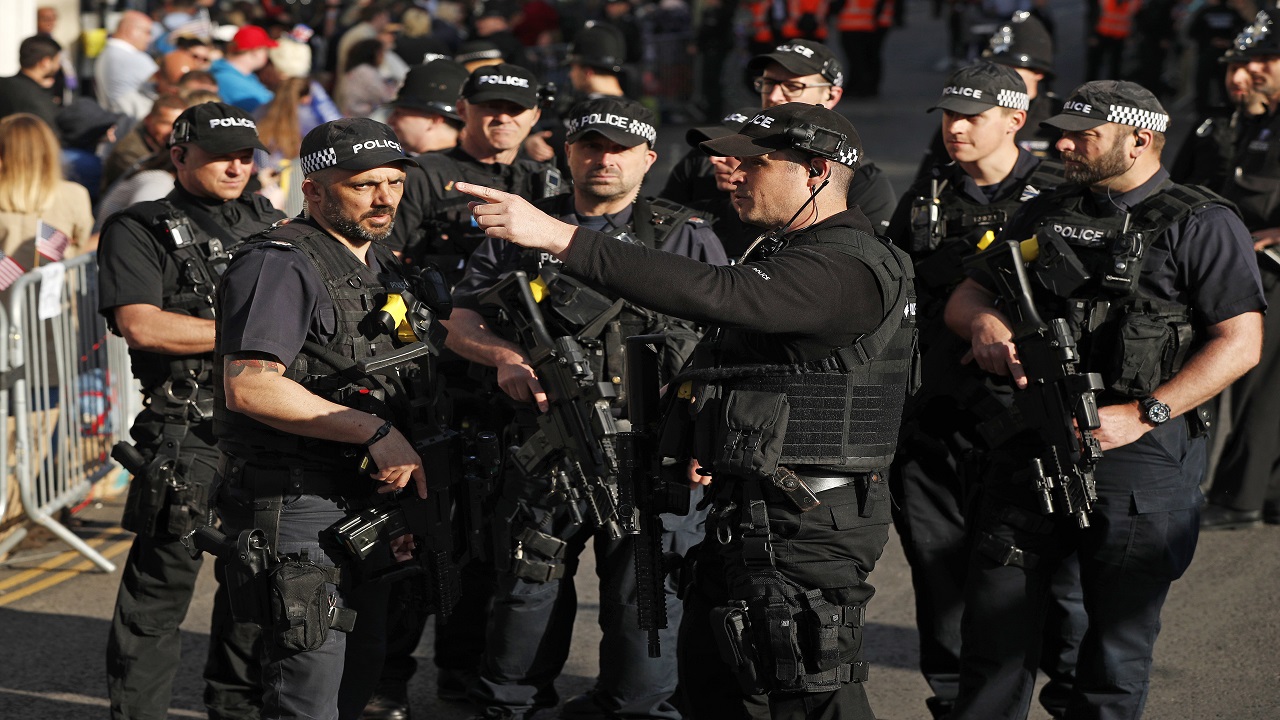 Armed police officers patrol ahead of the wedding ceremony of Prince Harry and Meghan Markle at St. George's Chapel in Windsor Castle in Windsor, near London, England, Saturday, May 19, 2018.

Royal fans jammed the first trains into Windsor on Saturday as thousands of revelers streamed into the town to capture their own little piece of the extravaganza that is expected for the royal wedding of Prince Harry and American actress Meghan Markle.

As the celebrations got underway, Queen Elizabeth II honored her red-headed, 33-year-old grandson with a new title — the Duke of Sussex. That means that Markle will become the Duchess of Sussex.

Harry's status as a senior British royal and Markle's celebrity after starring on the U.S. TV series "Suits" for seven years has turned the wedding at St. George's Chapel on the grounds of Windsor Castle into a global event. The wedding pomp and ceremony — complete with Anglican prayers and tradition, classical music and a gospel choir — as well as a horse-drawn carriage ride through Windsor will be beamed live to tens of millions of TV viewers throughout the world.

Among those crammed on the early train to Windsor was Irene Bowdry, a lawyer from California who booked her trip to England as soon as the wedding date was announced.

"An American in the royal family, isn't that so exciting?" she said.

The weather is balmy and clear, bathing the ancient stones of Windsor Castle in a beautiful spring light. Stars are flying in from Hollywood. Royal fans have been camping outside the castle for days. British police have stepped up security, with sniffer dogs, barricades and patrols all over town.

"Windsor is absolutely bursting with excitement," said royal historian Hugo Vickers. "There are cardboard cutouts of Meghan and Harry in every shop window, virtually. There's bunting all over the place. I've never seen so many people in the streets of Windsor."

Everyone is waiting to see which designer Markle has chosen for her wedding gown. Prince Charles, the groom's father, will walk Markle to the altar after her own father became too ill to attend.

It is a time of transition for the British monarchy, one that seems filled with hope as William and Harry — the two sons of the late Princess Diana and Prince Charles — step ever more confidently into the limelight. The brothers even found the time amid the wedding hoopla to stroll outside the castle Friday evening to thank fans for coming.

A smiling Harry gave a thumb's up and answered "Great, thank you!" when asked by a fan how he was feeling on the eve of his wedding.

And it seems to be a time of joy for 92-year-old Queen Elizabeth II and her 96-year-old husband, Prince Philip, who plans to attend the ceremony despite his recent hip replacement surgery. She is seeing her grandson marry a woman who clearly has brought him the happiness he's often said was missing from his life.

The family tableau will play out on the broadest possible stage. Dozens of broadcasters have set up on the castle grounds for a visual feast. The chapel itself is a masterpiece of the late Gothic style, and Windsor Castle has been home to British sovereigns for nearly 1,000 years.

After the ceremony, the newlyweds will ride a horse-drawn carriage through the streets of Windsor, flanked by a British military procession with many officers on horseback.

Then it will be off to the first of two gala receptions. The first will be hosted in the afternoon by the queen — with finger foods, wine and champagne. The second, smaller reception is being thrown by Charles.

A three-hour break in between will allow for a rest and a change of outfits for the lucky 200 invited to the evening soiree.

The chapel service will reflect Markle's American roots. The Most Rev. Michael Bruce Curry, the African-American leader of the Episcopal Church, will deliver a sermon, and the musical selections will include versions of "Stand By Me" and Etta James' "Amen/This Little Light of Mine."

Markle will be accompanied by her mother, Doria Ragland, when she is driven to the chapel on Saturday, and many of her closest friends and some co-stars from "Suits" will be in the audience. She opted not to have a maid of honor but there will be 10 young bridesmaids and page boys, including 4-year-old Prince George and 3-year-old Princess Charlotte, the elder children of William and his wife Kate.

Harry will be joined by some of his buddies from his 10 years of military service — an experience that included tours of duty in Afghanistan — and from many of the charities he supports, which have focused on helping wounded veterans or encouraging a more open discussion of mental health issues.

The couple has made an effort to honor the memory of Harry's mother Diana, whose older sister Jane Fellowes will give a reading during the wedding service.

After seeing the couple up close, Curry said Friday that he saw "two real people who are obviously in love."

"When I see them, something in my heart leaps," he said. "That's why 2 billion people are watching them."

Prince Harry: From royal rebel to soldier and activist