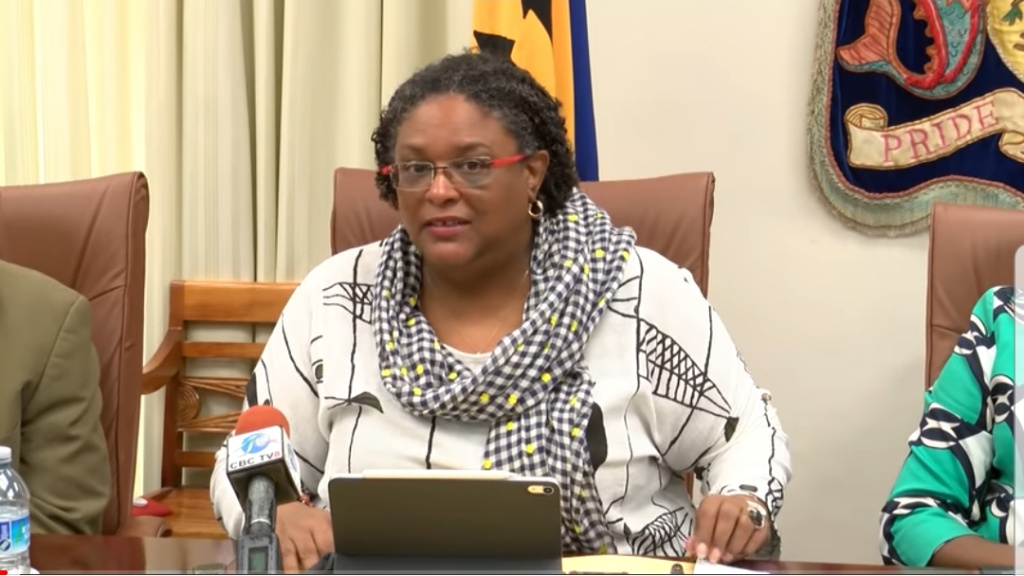 The 75 cents hike in bus fare announced in Prime Minister Mia Mottley's March Budget this year will remain, but with immediate effect, the island's school children will continue to ride free on Transport Board buses while paying a dollar less than the $3.50 fare which went into operation from Monday, on all Public Service Vehicles (PSVs).

Also, under an arrangement currently being finalized and, which will be rolled out to the public in the coming days, school children, senior citizens and officers of the Royal Barbados Police Force, much like they do on Barbados Transport Board vehicles, will also ride for free on all PSVs, which will be operating under the Transport Board’s brand and carrying its logo on their vehicles. The government will reimburse these operators for carrying these categories of people for free.

In addition, Prime Minister Mia Amor Mottley earlier this afternoon also announced anyone buying a bulk Smart Ride card will pay $3 per ride, regardless the number of rides allowed by the card.

These outcomes follow a meeting she called for and chaired, involving all stakeholders in the island’s public transport system, including PSV owners and operators, trade union officials, representatives from the Transport and Licensing Authorities, government officials and other cabinet colleagues, including Transport, Works and Maintenance Ministers, Dr William Duguid and Peter Philips.

Since its rollout earlier this week, there had been a hue and cry about the move to increase the fare, but also, the impact it would have on school children and their parents.

Speaking to the media this afternoon Prime Minister Mottley said Government was in the process of amplifying the Barbados Transport Board’s ability to provide vehicles for the travelling public but hinted that state entity’s role would be changing.

“The Transport Board more and more will be brand, as opposed to being the owner of vehicles, we will work to be able to ensure that the privately owned [Public Service Vehicles-PSVs] have agreed that they will not charge school children more than $2.50. In the case of the Transport Board buses, that $2.50 is obviously paid by the government.

"In the case of the PSVs that are privately owned, not working under the Transport Board brand, then the school child will pay $2.50. There is still an obligation on us to have as many buses operating under the Transport Board brand, such that the school children don’t have to pay anything at all . . . and that is what we are working towards,” the prime minister stated.

With regards to the Transport Board branded bus program, Mottley noted that there were almost 735 routed vehicles carrying ‘B’ and ‘ZR’ plates, along with 138 BTs, 900 odd ZMs and the Board, which had out of a compliment of 270 buses, between 50 and 80 on the road.

“Now that is unacceptable and therefore, my government will ensure that there is a national approach to the delivery of public transport in Barbados immediately . . . . We have agreed that the Transport Board, the Transport Authority and the and the privately owned PSVs and the Ministry will work to be better able to refine the routes . . . and to make sure that the rebuttable presumption of the 270 buses needed to more than adequately service the routes is the objective to which we have to reach in another two months or so.

"We have not finished all of the discussions today because what is required now is the fine detail work of which routes and which owned vehicles can come and the settlement of the contract for which I believe a draft is now available. Everyone will continue to meet over the next few days because we want from Tuesday when the long weekend is over, we start with considerably more buses [on the road], and we will let the public know the roll-out [and] what has been agreed over the next few days with PSVs under the Transport Board brand and under a contract that makes sense,” the prime minister added.

Ahead of Monday’s hike, the Board had rolled out a series of volume discount tickets offering rides in bulk at $32 for 10 trips,$44 for 14 trips, $62 for 20 trips and $84 for 28. Prime Minister said this afternoon a volume discount of $3 would go into immediate effect

“If you are going to buy 10 tickets or the larger amount, the volume discount will now be three dollars [per ticket], so that 30 dollars will get you ten rather than the fares that you would be getting currently at $3.20.”