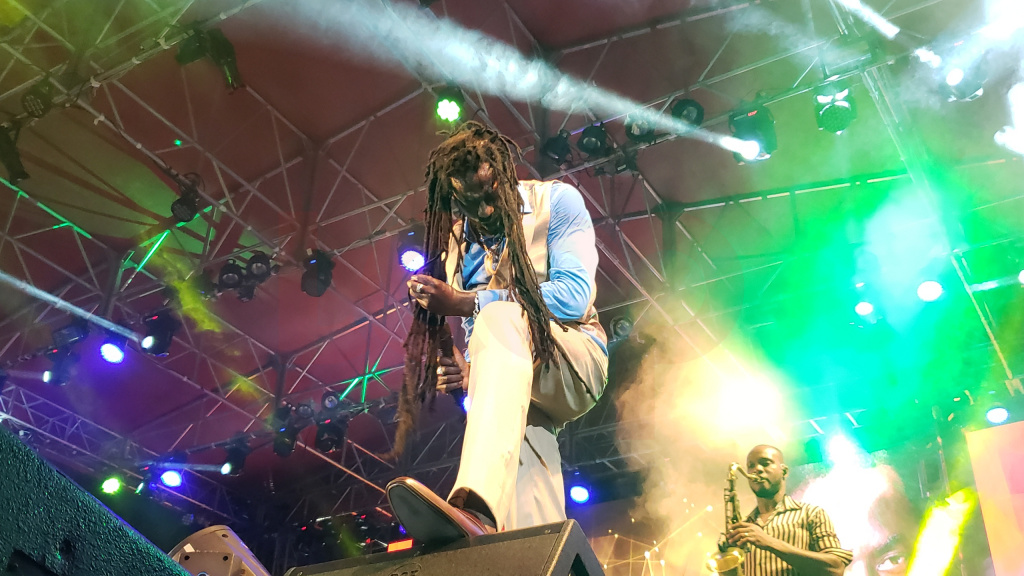 The Buju Banton Long Walk to Freedom show held in Barbados, Saturday, April 27, 2019, though highly anticipated was more than many fans and patrons expected.

Some will say they waited ten years for his stellar performance, but even persons who saw him perform live before would tell you that the show that Mark Myrie, stage name Buju Banton put down overshadowed any of his previous ones on these shores.

From the time he hit the stage around 1:41 am, Sunday, National Heroes' Day, to his wardrobe switch from vest coat and button-down to T-shirt, it was easy to feel his energy and catch his infectious good vibes. Buju looked so happy that he was almost always smiling and singing from the time he sang the Lord's Prayer while in the wings before bursting on to the stage with "Destiny".

We all know for him to get to the Barbados stage was "Not an easy road" but it was obvious to see that singing for his fans is what he intends to do until as he sings "Till I'm laid to rest". And as he started with prayer, so he ended just before 3:00 am, Sunday, April 28, 2019.

Fas7Star deserves endless praise for the setup at Kensington Oval. Some were scared that the VIP section would have been oversold but on entry it was clear that almost half the field went to the patrons paying in excess of BBD $300 or USD $150. And there was not a complaint from the VIP Patrons.

I have done VIP numerous times under this organiser and this time took the cake.

The bar setup was amazing with persons who required extra care for their cocktails having their own bars. The food stations catered to everyone from the Ital is Vital to the jerk pork, with those craving sweets having a tent to themselves. And if having Buju Banton in your backyard didn't make Bajans feel as though they were in the 876, the Juici Jamaican patties helped seal the deal.

Besides the food, drinks and space, there were many built up areas for good vantage points. There was even a 'BUJU' ice sculpture. In terms of added amenities patrons enjoyed foot massages by Baje Spa and glam touch ups by Inglot Barbados and others took home printed photos as memorabilia to remember the night.

Buju Banton was the headliner but Wayne Wonder who gifted the world with 'Gargamel' put down a solid performance. Then Spragga Benz did his "Rasta man" thing. With surprise act Agent Sasco "Winning Right Now" and he dusted off tracks from his arsenal when he went by the alias Assassin like "Anywhere we go".

Repping for the Bajans was Buggy Nhakente and he carried the Barbados flag high and well. He was the only Bajan artiste to touch the mic and he made sure to leave the world of thousands - over 17 000 to be exact, with some powerful messages including his stance against child abuse of any form including pedophilia.

The deejays kept the thing flowing from the time the doors opened around 7:00 pm. Jon Doe and DJ Tami, Bard and Pipe Iron, Indian and Chris Gayle and then flying across the Caribbean Sea and Atlantic Ocean just to shell Kensington Oval was Deejay Puffy. Telling fans to imagine that "four hours ago" he was in the Land of Wood and Water, he put down an exceptional performance like the class act that he is.

Buju Banton's Long Walk to Freedom was great... we just hope it's not another 10 years before we hear "Untold stories" live and direct again.

After the Caribbean tour, Buju is scheduled to hit Europe.