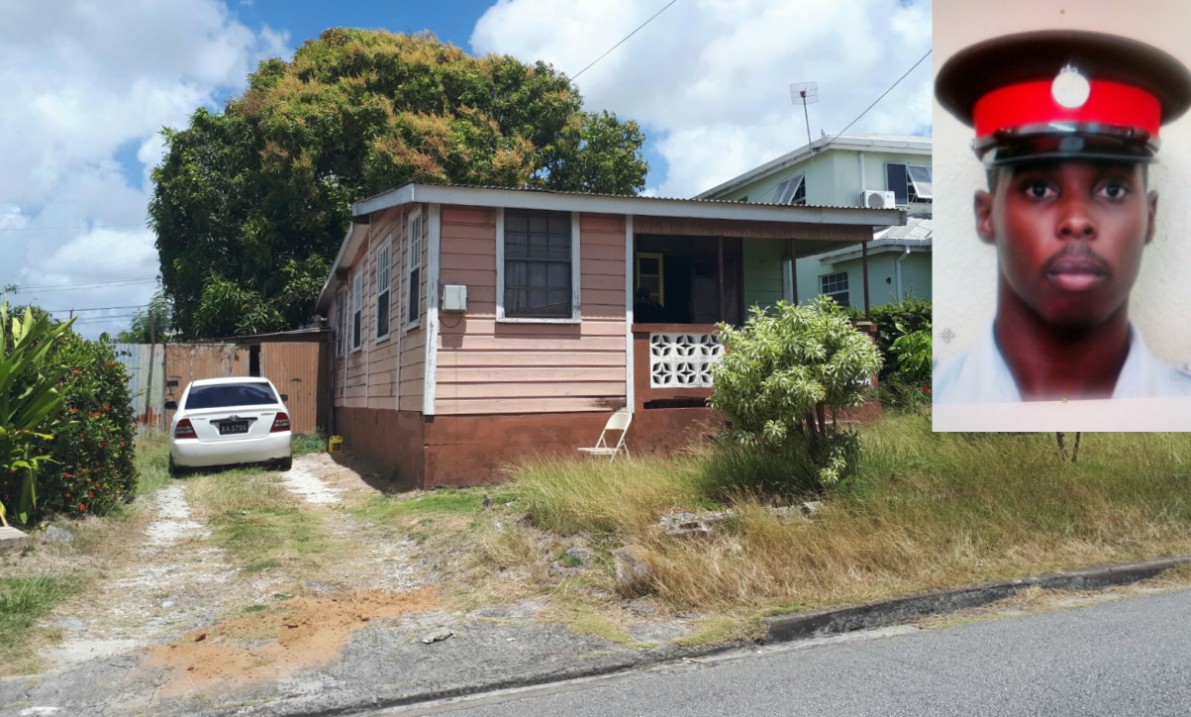 The home of the deceased Police Constable, Shayne Welch. (Inset: Photo of Welch in uniform)

The death of Police Constable, 31 year old Shayne Welch has thrown the Kingsland Drive, Christ Church community into a state of shock particularly as his death is reported to be as a result of a domestic dispute.

According to police, Welch was attacked outside his home around 5:45 am and died as a result of stab wounds about his body. Another person, the female police constable believed to be at the center of the dispute, was reportedly also injured in the incident.

When Loop News visited the scene today, residents were quietly loitering around Welch's home where his family and close friends were gathered. The spot where Welch died was covered with sand in an attempt to hide the blood of the deceased constable.

The family of Welch opted not to share any information with the media but residents recapped what they heard and saw in the wee hours of the morning leading up to the stabbing incident.

A female neighbour of Welch gave a vivid description of the what she heard. She said she was awoken by the sound of knocking at 5:35 am thinking that someone was knocking at her door. She said she went to 'peep through the curtain' but did not see anyone. It was after the knocking resumed she realized it was coming from Welch's residence.

She said she heard a commotion with a man who was riding a motorcycle shouting and swearing outside the house. She said the attacker was shouting out a name and said,

She went on to say how she heard the man ride away only to return a few minutes later shouting and swearing yet again. On this occasion he shouted toward the house,

Shortly after, Welch emerged from the house and he and the attacker began fighting in the road. The neighbour said Welch then turned to run back inside his house with the attacker right on his heels. She said she did not see exactly when or where about his body Welch was stabbed but she said he fell down in the driveway and the attacker got on his motorcycle and rode away for the final time. She said, she too had heard the speculation about the stabbing being in regards to a female Welch was involved with.

Another male resident, who lives directly opposite the home of the deceased, said he was fast asleep when the incident happened. He said he came outside about "minutes to six" where he saw a female crouching over the body of Welch in the driveway and applying pressure to his stab wounds. He said he could not identify the woman.

Barbados Labour Party representative for the area Ryan Straughan, said he had known Welch for some time and described him as a quiet person and dedicated officer. Straughn said he hopes the outcome of this incident would highlight how necessary it is to choose alternate ways to resolves domestic disputes.

Residents who knew Welch also echoed similar sentiments, saying the young man was never known to be involved in any disputes with anyone and he was friendly with most in the community. Many of them said they knew him as a youngster growing up where he lived with his mother, who passed away a few years ago, and his grandparents, who also passed away.