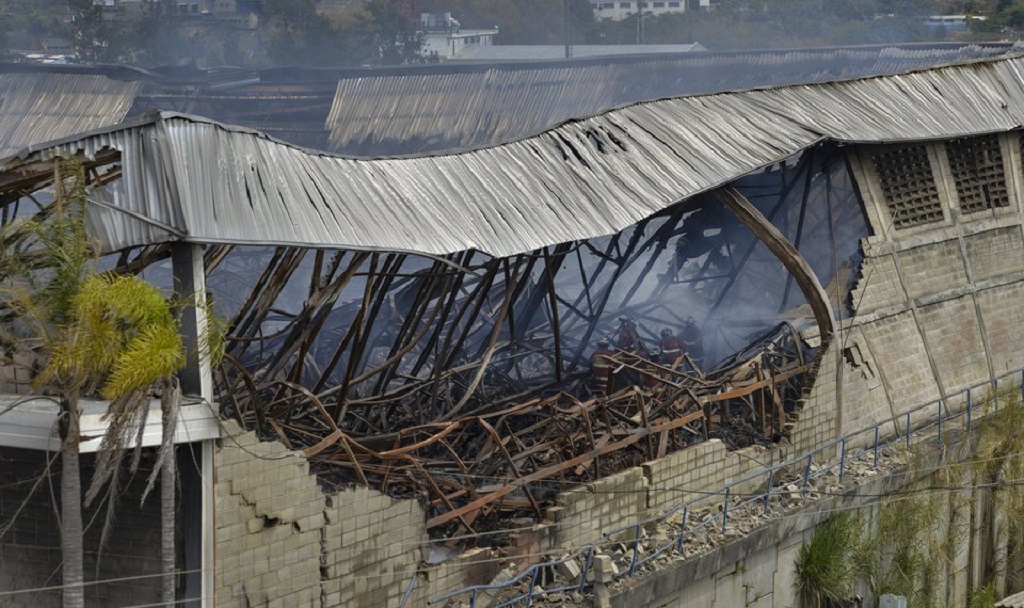 Firefighters work in the aftermath of a fire at a warehouse of the National Electoral Council where tens of thousands of voting machines and fingerprint readers were destroyed, in Caracas, Venezuela, Monday, March 9, 2020. Government officials are vowing not to let the fire deter their quest to hold legislative elections this year. (AP Photo/Matias Delacroix)

Venezuelan authorities are vowing not to let a fire that destroyed thousands of voting machines deter their quest to hold legislative elections this year that could help President Nicolás Maduro consolidate his power.

Officials on Monday provided few details about the weekend fire, but both pro- and anti-Maduro factions tried to throw suspicion on the other.

Tibisay Lucena, president of the government-stacked National Electoral Council, said the fire that tore through a warehouse Saturday, obliterating 49,323 voting machines and nearly 50,000 fingerprint readers, would not prevent a planned vote to replace lawmakers in the last opposition-controlled federal institution.

"If there are groups who think that they're going to stop electoral processes, constitutionally established, they are very wrong," she said Sunday.

Diego Moya-Ocampos, principal Venezuela analyst with the London-based consulting firm IHS Markit, said he was suspicious over the fact that the election authority gave an exact number of destroyed machines so quickly after the flames were extinguished.

He also suggested it could be a government plan to delay the elections because of the long process needed to order new equipment.

"Whatever the causes of this fire is, the government is going to try to use it against the opposition to start a witch hunt," he said. "It could be they started the fire on their own to persecute opposition leaders, to have an excuse to go after them."

Maduro has been vowing to quickly convoke legislative elections for several months, threatening to hold them earlier than usual. The election is constitutionally scheduled to take place in 2020, though it usually is held at the end of the year. Opposition leaders have not yet stated whether they will participate.

The opposition has boycotted other recent elections, refusing to participate in an election run by the current electoral body, which is dominated by pro-Maduro officials. Authorities have barred a number of high-profile opposition leaders from running and are accused of manipulating the vote in which Maduro' was re-elected in 2018.

Opposition leaders have expressed concern about running in a legislative vote without a reformed National Electoral Council that would allow what they consider a free and fair election, though analysts also warn that if they do not participate, Maduro allies could assume control of the opposition's only remaining national platform in the government.

National Assembly leader Juan Guaidó said he believed the fire was "caused by the dictatorship."

"It's the dictatorship who has to give us answers," Guaidó said in a Monday news conference. "Why did they store the nation's sensitive material in a single security zone? How is it that they had them in their custody and sheltered and this happened the way it did?"

Lucena said two prosecutors have been assigned to investigate the fire, which took place at a warehouse in the state of Miranda, not far from the capital.

"The CNE wants to know the truth: What was the origin of the fire and how did it spread so rapidly?" she said in a state broadcast. "No hypothesis is being discarded."

First responders were able to rescue only 562 voting machines and 724 fingerprint readers.

"Very little could be recovered," Lucena said. "It was a great effort, but the fire was greater."

Guyana President on elections: I have acted in accordance with the law