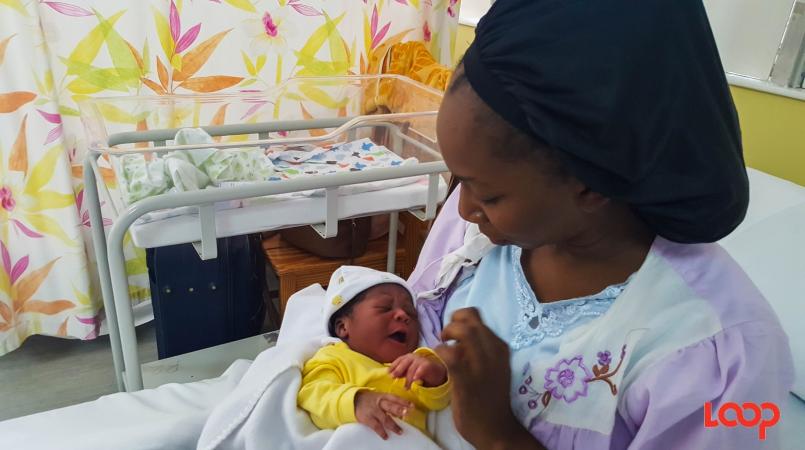 “From in the womb, she would move only if she heard her father’s voice. She would not go to sleep until he got home and talked to her.”

Anniyah was the first baby born today at 1:18 am.

Thirty-four-year-old Kerryann had to check her notes for the exact time because she said during the delivery she had two issues. Firstly, her husband Oneil Greaves distracted her and secondly, Anniyah was eight pounds four ounces. “That’s the biggest of my four children and I have the scars to prove it.”

Laughing now, she said that he was ecstatic and extremely fussy. “He would not stop taking pics and he did not leave until it was all over.”

Kerryann said they have a bond already and it’s obvious because not only did Anniyah listen to her dad from before birth, only in this world 11 hours now and she responds when his name is mentioned too. During the interview when Kerryann said “Oneil” sure as day, Anniyah peaked and Kerryann said that as the nurse spoke to her father, she kept trying to find him following his voice, and “she opened her eyes just for him.”

But she was not jealous, smiling she just admired her Christmas bundle.

Anniyah may be the biggest baby of the Greave’s four but she was true to form coming early like her siblings. She was due January 4, 2017.

Anniyah is a gift and a surprise, so her Christmas arrival was just the topping on a cake.

Laughing as she remembered, Kerryann said my last child was born 13 years ago, and the funny thing is, “I was craving something, and one day at work the girls and I were talking and I said that I miss the feeling of the baby moving around and the next week I found out I’m pregnant.”

Asked if she will ever talk about pregnancy again, without hesitation she shouted, “No!” And we all shared a good laugh. She said she’s done putting any such ting out in the atmosphere.

In terms of surprises, she added that seeing Anniyah's headful of curly hair was another shock because fofirst timet-time she did not have heartburn with this baby and giggling, she said she actually expected her to be bald.

When questioned about what she hopes Anniyah learns or adopts from her older siblings, thinking for a minute, Kerryann said, “Hmmm… there are many traits but the 13-year-old Shaunika lives in the kitchen, the middle one, my 14-year-old daughter L’shauna is bubbly and my oldest, the boy, Raheem is 17 and he is more the academic, so if she gets piece of each of them, she’ll be good.”

And of course she also will learn from mom and dad, she added.

Over at Bayview Hospital there were no Christmas babies as of 12:30 pm.

Four babies were born today and all were delivered at the Queen Elizabeth Hospital.

After Anniyah and the baby boy at 9:34am, in the afternoon two other baby boys were born just over an hour apart.

At 1:08 pm on baby boy was delievered weighing seven pounds, five ounces and then at 2:19pm, the next boy was born at a weight of seven pounds.

All the babies and their mothers were healthy and moved from the Labour Ward to the B Wards.

Congrats to all the parents! Well done to the doctors and nurses!