Football wishlist for new BFA executive ahead of elections 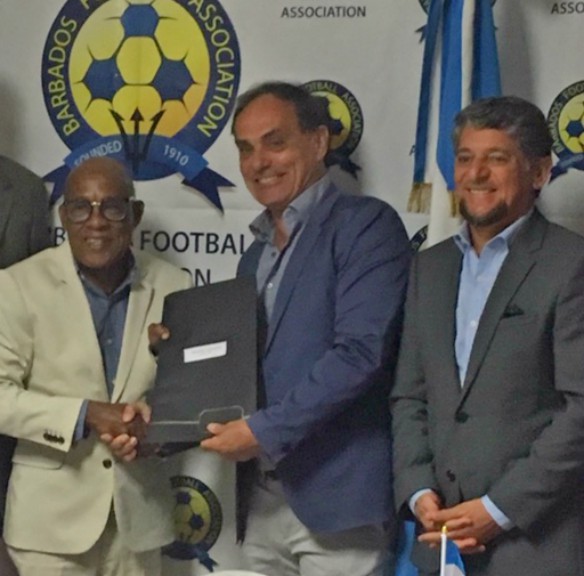 Originally scheduled for March 22, the AGM was postponed due to the COVID-19 virus.  However, since the restrictions have been lifted the Executive Board of the BFA have announced the event for August 9, 2020 at the Wildey-based facility.

Over the last couple of weeks, there has been much attention surrounding the meeting, particularly the election of officers and the protocols used to do so, with many questioning the integrity of the process and those involved with it.

On August 9, all registered clubs of the BFA, will express their democratic responsibility via two representatives to vote for their members of the BFA Executive Board for the next four years.

President Randy Harris will be unopposed in this year’s elections, along with incumbents Junior Vice President Ashton Chapman, and Assistant Treasurer Thomas Jordan.

Gregory Thompson is the sole candidate running for Senior Assistant Secretary, while Trevor Taylor is also unopposed for the Treasurer position which was previously held by sports administrator Adrian Donovan.

Initially it was reported that only 23 clubs were eligible to vote, however, days ago President Harris informed the public that all clubs who are currently registered with the BFA will be allowed their two votes at the AGM.

With a number of critical components to focus on in the next 12 months, whoever is successful in their bid to serve the football fraternity, will have to display discipline, commitment, transparency, integrity, empathy and unconditional love for the growth of the game in the island.

The above mentioned characteristics will be valuable components to making the wish list below a reality.

As simple tool but effective instrument. This organization tool is critical to planning and preparation, key cogs to the operation of any organization.

With a national calendar, which contains local and international events, the football association, its members and other shareholders of the game have at least the idea of what is happening, the impact of whatever events may have on the individual, the clubs or other organizations, it allows for proper planning in each area of the game, but most importantly it shows that there is careful thought and composition to all football operations.

The senior men’s team and the local Premier League are our two biggest attractions in Barbados football, and justifiably so, as men’s football is one of the most popular sports globally and one of the most profitable sports for any nation.

The Premier League is made up of some of those players within the national team and some of the better players in the island, therefore this genre of the game must be carefully looked after, because of their revenue-generating capabilities.

However, there are other branches of the game that stand to benefit from just a portion of the attention given to the two previously mentioned branches.

I believe the Secondary School Leagues (boys and girls), the National Sports Council (NSC)Primary School competition and even the Masters division can benefit from greater support, attention and partnership from the BFA.

Some may deem it as a momentous task, but without full-time staff like the BFA, , the Barbados Amateur Basketball Association and the Barbados Volleyball association partner with the schools to develop their respective athletes and the sport.

Working closer with the Secondary School’s Leagues and the NSC allows the BFA to identify more intimately with a greater pool of players and coaches, as well as monitor the progress of these two groups.

Beach football is a sleeping giant amongst us, women’s football has suffered a massive decline and from my time spent at the Oasis facility, street football/futsal is a whole new world to explore.

The country has made significant strides in our coaching education, thanks to the Executive Board and Technical department of the BFA; where we can boast of a number of licensed, certified coaches, which include 14 graduates of the Concacaf B License coaching course (the highest coaching grade at that level).

Despite this progression, there is one missing element, which was mentioned when I first got into coaching 14 years ago; a football curriculum.

This mechanism falls at the feet of the technical department with support from the Board, as it allows our coaches, teachers and administrators to have an idea of the aims and goals of the game from a technical perspective.

The creation of the curriculum also lends to a clear and detailed methodology of teaching the game, monitoring development and assessment.

The Icelandic Football Association, came up with a strategic plan which targeted the technical and administrative department, that showed the socio-economic impact that football will have on the nation, the role that social institutions have in the sport’s development and a clearly identified path towards international success, which they achieved in 2016 (Euros), 2018 (World Cup) and on stream to do again in 2021 (Euros).

Football is still the number one participant sport in the island and also have top spot in the most watched category as well, therefore if our administrative leaders are to create such a document that highlights the national benefits for all, as a result of our football success, then we are one step closer to achieving our goals of international glory and potentially a semi-professional league.

The quality supersedes quantity in my opinion.If the message is clear, concise and addressing the topic, then more often than not the reception is loud and clear.

An improvement of the quality of communication will serve the next administration well, especially on the back of what took place with the nomination fiasco which decorated the local media, where one message was originally communicated to the public by the secretariat, but amended by the president days later.

Those outside of the office or even the organization, want to feel a connection, therefore things such as content, the access to information and the relaying of information are key components to impactful communication and a subsequent successful service.

Renaldo Gilkes is Loop's lead sport journalist, specializing in football and he is also a Barbados (BFA) & Concacaf licensed coach and coach instructor.