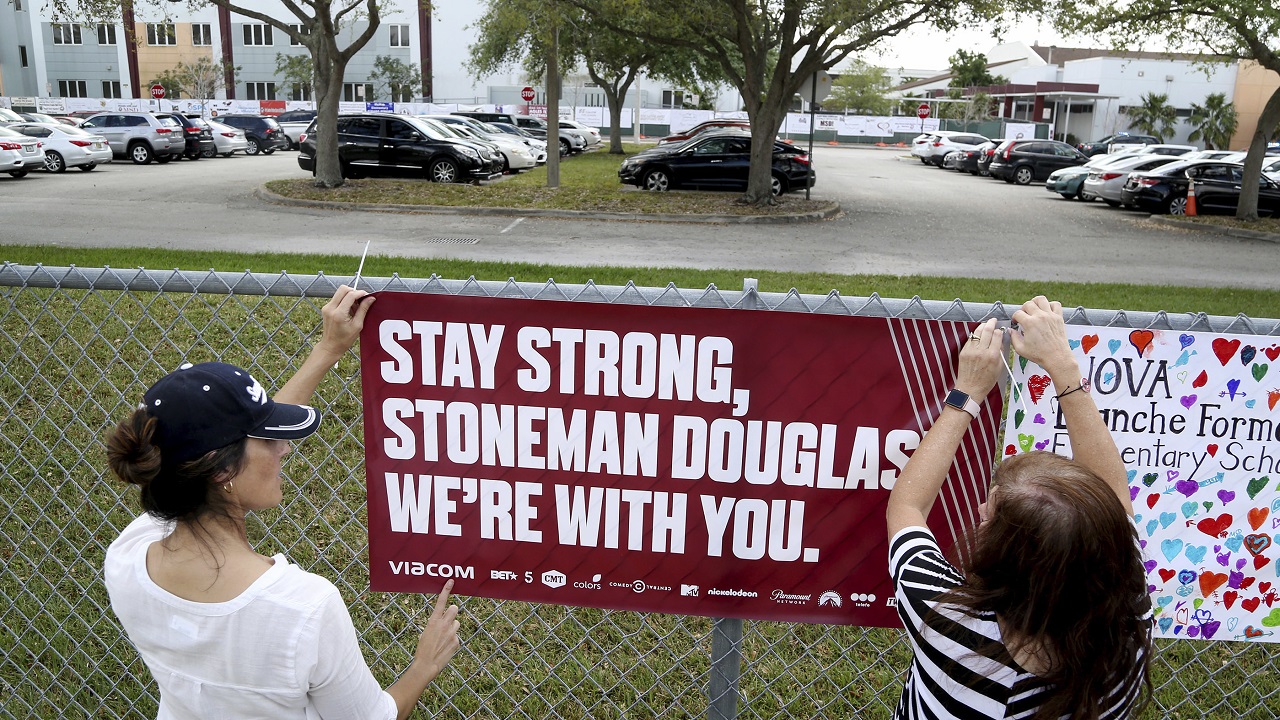 (Image: AP: Volunteers hang a banner at the high school in Florida to welcome returning student)

About 50 uniformed officers marched into Marjory Stoneman Douglas High School early on Wednesday, just one aspect of the heavy security as classes resumed for the first time since 17 students and teachers were killed by a troubled teenager with an AR-15, thrusting them into the center of the nation's gun debate.

The heavily armed police presence, designed to make the community feel secure, is also disturbing in itself, some students said. "This is a picture of education in fear in this country. The NRA wants more people just like this, with that exact firearm to scare more people and sell more guns," said David Hogg, who has become a leading voice in the students' movement to control assault weapons.

Grief counselors are on campus as well "to provide a lot of love, a lot of understanding" and help students "ease back" into their school routines, Broward Schools Superintendent Robert Runcie said. Officers with therapy dogs also stood outside.

Wednesday's class schedule started with 4th period, so that students and teachers could return to the people they were with during the shooting. The freshman building where the massacre took place remains cordoned off.

Casey Sherman, a 17-year-old junior, thinks the schedule was a good idea so kids can "get it over with" and not worry about it all day. Up until 11:30 p.m. working on preparations for the 14 March national school walkout against gun violence, she said she's not afraid to be returning, "just nervous".

A long line of cars circled the school and dozens of television trucks and vehicles were camped out nearby as students, parents and staff were ushered through a security cordon, past a "Welcome Eagles" banner and a walkway lined with flowers, photographs and other memorials. Some were returning despite severe gun wounds, but even those who weren't hit by bullets spoke of emotional trauma.

Meanwhile, Dick's Sporting Goods announced it will immediately end sales of assault-style rifles in its stores and won't sell guns to anyone under 21 years old. Dick's Chairman and CEO Edward Stack said on ABC's "Good Morning America" on Wednesday that after the Florida shooting, the company "felt it needed to do something".

Dick's, a major gun retailer, had cut off sales of assault-style weapons at Dick's stores following the Sandy Hook school shooting. But Dick's owns dozens of its Field & Stream stores, where there has been no such ban in place.

In a letter released Wednesday, Stack wrote: ''We support and respect the Second Amendment, and we recognize and appreciate that the vast majority of gun owners in this country are responsible, law-abiding citizens. But we have to help solve the problem that's in front of us. Gun violence is an epidemic that's taking the lives of too many people, including the brightest hope for the future of America - our kids."

Stack said on "Good Morning America" that Dick's Sporting Goods Inc is prepared for any potential backlash, but will not change its policies on gun sales. Walmart Inc, also a big gun seller, stopped selling AR-15 rifles and other semi-automatic weapons in 2015.

Florida deputy accused of cowardice ‘thought gunman was outside'

The Florida shooting teen taking on the gun lobby