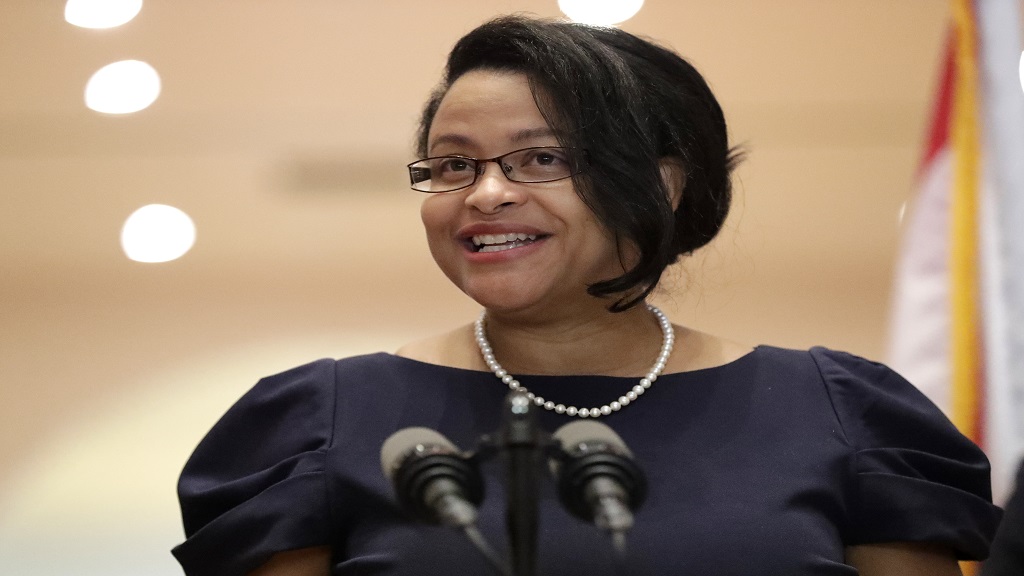 In this May 26, 2020 file photo, Renatha Francis smiles as she speaks at a news conference in Miami. (AP Photo/Wilfredo Lee, File)

Republican Governor Ron DeSantis must pick a new Supreme Court justice because the judge he picked to fill a high court vacancy is constitutionally ineligible to serve, the court said in an order issued Friday.

The Florida Supreme Court ordered DeSantis to appoint another judge by Monday, nullifying the appointment of Jamaican-born Judge Renatha Francis. She would have been the first Caribbean-American justice to serve on the court.

But the state constitution requires that a justice be a member of the Florida Bar for at least 10 years, and Francis was four months shy when DeSantis appointed her in May. DeSantis acknowledged the shortfall at the time, but said she wouldn't be sworn in until September 24, the day she would meet the requirement.

The Supreme Court said that DeSantis was required to name a constitutionally eligible new justice within 60 days of the resignation of former Justice Robert Luck.

“The Governor has not complied with the constitution’s clear commands,” the court said in its unanimous ruling.

DeSantis's office said it is reviewing the decision before commenting on it.

Francis's appointment was challenged by Democratic state Rep Geraldine Thompson, a prominent black state lawmaker. DeSantis held a press conference Wednesday sharply criticizing Thompson for demanding he appoint a black justice, and then suing to block his appointment of Francis, who would have been the court's only black justice.

Thompson responded the next day, saying DeSantis only chose Francis because she shares his conservative ideology, not because he is trying to achieve racial diversity. And she said the governor has to follow the rules.

Florida governors are required to fill vacancies from a list provided to them by the Supreme Court Judicial Nominating Commission. Friday's ruling said that DeSantis must pick a new nominee from the original list, given to him earlier this year.

Francis operated a bar and trucking company in Jamaica before moving to the United States as an adult and working her way through law school. She is currently a circuit judge in Palm Beach County, and a former member of the Federalist Society.

In a ruling two weeks ago, the Supreme Court said DeSantis exceeded his authority by appointing a constitutionally ineligible nominee, but did not undo the appointment, saying Thompson’s suggested remedy wasn’t legally available.

Thompson had requested a new list of candidates for DeSantis to choose from, but the court said the proper solution would be to have him pick another candidate from the original list. She then amended her petition to fit the court's ruling, resulting in Friday's order.