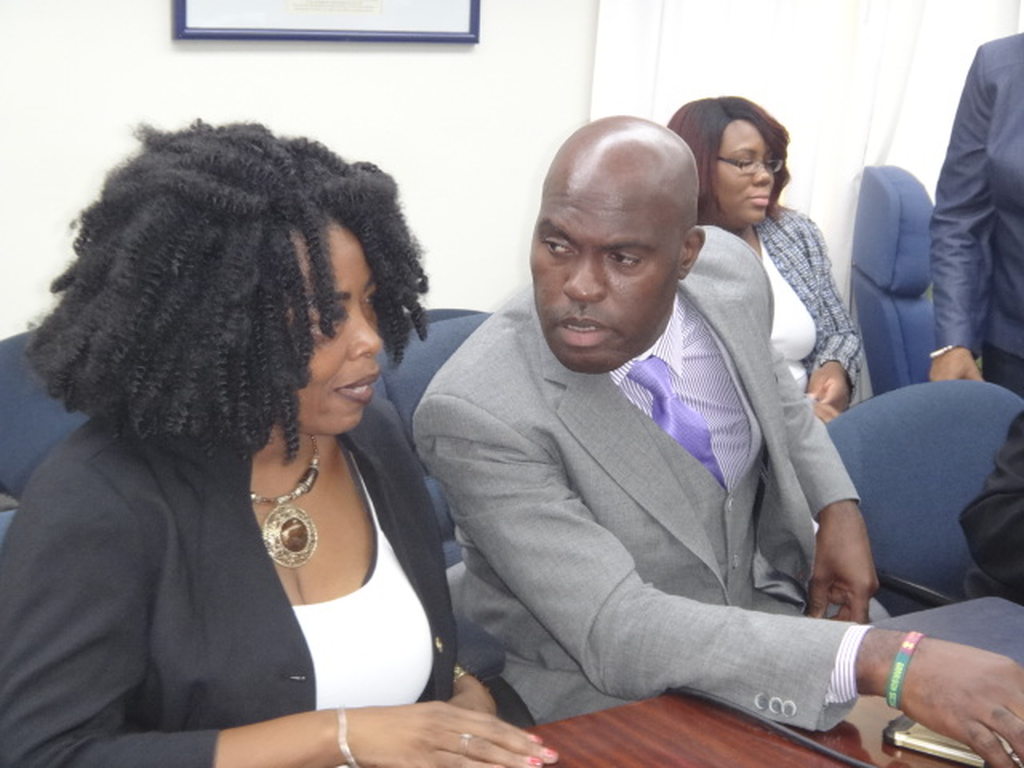 Left to right: President of the Barbados Road Safety Association, Sharmane Roland-Bowen and Minister of Transport and Works, Michael Lashley.

Too many accidents and road fatalities have spurred the Ministry of Transport and Works (MTW) to launch a Public Awareness Campaign on Road Safety.

Transport and Works Minister Michael Lashley says following a meeting in March with members of The Barbados National Road Safety Council it was agreed that the recent spate of road fatalities and serious accidents required an aggressive multi-sectoral response.

At the launch held on Wednesday at the Ministry’s main conference room at the Pine, St. Michael, the minister said the campaign is one that has key agents and advocates in road safety on board. Among them, The General Insurance Association of Barbados, The Barbados Road Safety Association, The Royal Barbados Police Force and The Ministry of Health.

Among the initiatives being undertaken by the ministry is the amendment of the Road Traffic Act and Regulations, which according to him will be laid in Parliament soon.

He is hoping that after the budget this will be given attention in Parliament and he has promised that all machinery will be in place for enforcement before year end.

“We just have to get it on the Parliament timetable, so those who want to go party for Crop Over and believe they can go and drink and drive - then by the next Crop Over we should have the machinery in place to make the Act enforceable,” he said.

He also added that the Barbados National Road Safety Council must be restructured and revitalize. The Council according to Mr Lashley was established out of concern for the high incidence of collisions on the road and also a decision by the United National to declare 2011 to 2020 as the Decade of Road Safety.

Noting that the Council operates as an independent body, he said the time has come for it to assist with the implementation ovariousus road safety programmes.

There are also plans in place to expand the pedestrian safety programme and the ministry will also be exploring the possibility of the reconfiguration of the D’Arcy Scott Roundabout in the Warrens area to enhance a freer flow of traffic.

The initiative has not met with any objection from the partners but the concern is that the instruments are put in place and any implementation is done speedily.

President of the Barbados Road Safety Association Sharmane Roland-Bowen, says it is long in coming but timely as she laments on the number of road accidents and fatalities for the year so far.

“I am very happy am not counting our lucky stars as yet, and we hope that it [amendment] will not go over to 2018. I hope that in the next few weeks when it goes before Parliament something happens to make us and keep us as road users safe,” she said.

A media blitz is expected to be released soon and will be distributed across all media. The campaign will also include four short and impactful television ads, which were created by local filmmakers and spearheaded by Clish Gittens an employee of MTW. They are entitled: “Must Stop”, “Click It”, “Afternoon Ride”, and “The Road is Not a Track”.