Fractures in many nations widen as virus lockdowns ease 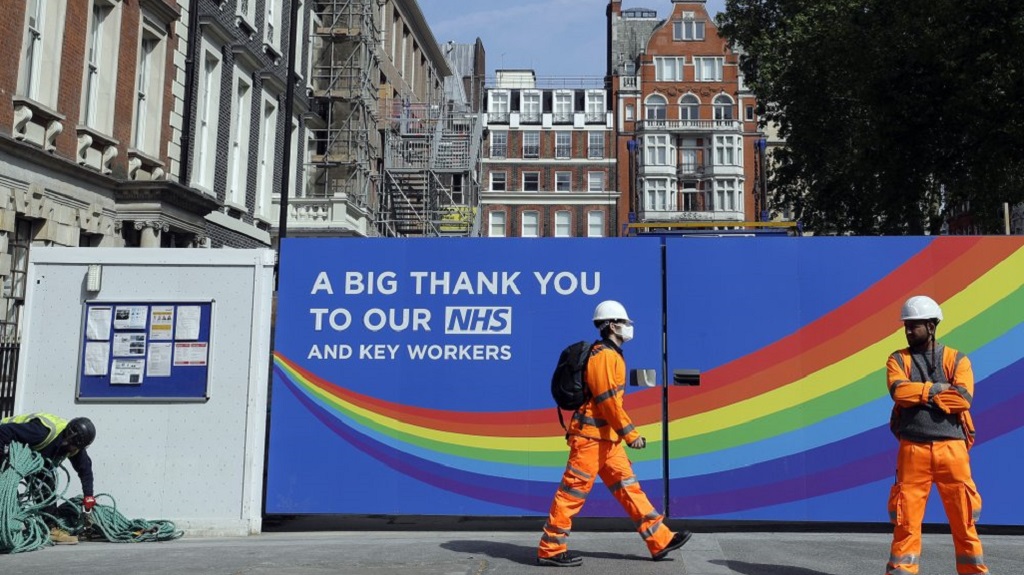 A construction worker passes a sign thanking the NHS in London, as the country in is lockdown to prevent the spread of coronavirus, Thursday, May 7, 2020. The coronavirus has had a dramatic impact on the construction industry. The Bank of England has warned that the British economy could be nearly a third smaller by the end of the first half of this year as a result of the coronavirus pandemic, but also notes the economy could revive quickly. (AP Photo/Kirsty Wigglesworth)

Regional and political fractures are emerging in many nations over how fast to lift the lid on the coronavirus lockdowns, as worries about economic devastation collide with fears of a second wave of deaths.

French mayors are resisting the government's call to reopen schools, while Italian governors want Rome to ease lockdown measures faster. As the British government looks to reopen the economy, Scottish leader Nicola Sturgeon has warned that acting too fast could let the virus wreak havoc again.

"Any significant easing up of restrictions at this stage would be very, very risky indeed," Sturgeon said Thursday.

The economic damage around the globe mounted.

In the US, nearly 3.2 million laid-off workers applied for unemployment benefits last week, bringing the running total over the past seven weeks to 33.5 million.

And the Bank of England warned that Britain's economy will shrink by 14 percent this year, its biggest annual rate of decline since 1706, when Europe was locked in the War of the Spanish Succession.

In Britain, where the official death toll stands at more than 30,000, second only to the United States, Prime Minister Boris Johnson was expected to extend a more than six-week lockdown on Thursday but hopes to ease some restrictions on economic and social activity starting next week.

Restrictions allowing people to leave home only for essential errands, shopping and exercise were imposed in Britain on March 23.

On Sunday, Johnson plans to set out a road map for the next phase.

Johnson said the government will act with "maximum caution" to prevent a second wave of infections.

In France, more than 300 mayors in the Paris region have urged President Emmanuel Macron to delay the reopening of schools, set for Monday.

Many mayors around the country have already refused to reopen schools, and many parents will keep their children home even where they are functioning again.

The mayors called the timing "untenable and unrealistic," saying they were put on a "forced march" to get schools ready without enough staff or equipment.

They complained that the government guidelines were too vague and slow in coming.

But governments are also under pressure to reopen faster and kick-start economies that have been plunged into hibernation.

Italian regional governors are pressing to open shops and restaurants, just days after the country began easing its two-month lockdown by allowing 4.5 million people to return to work in offices and factories.

Governors want to be allowed to present their own plans for reopening, tailored to the rate of infection and economic needs of their regions.

After an outcry from the nation's Roman Catholic bishops, Italian Premier Giuseppe Conte announced that public Masses will be allowed to resume on May 18.

In Spain, support for the government is crumbling after seven weeks of a strict lockdown, with some regions and opposition parties demanding an end to the state of emergency declared on March 14.

The government argues that it is far too soon.

Some of Germany's 16 powerful state governments are more impatient than others to open up businesses such as restaurants and hotels.

At a meeting Wednesday with Chancellor Angela Merkel, it was agreed that state leaders would have wide leeway to decide when to open more sectors of the economy. They also will have to reimpose restrictions locally if infections rebound.

In Russia, where the number of new infections is growing fast, President Vladimir Putin delegated the enforcement of lockdowns and other restrictions to regional governments, leading to wide variations across the country.

Mikhail Vinogradov, head of the St. Petersburg Politics think tank, told the Vedomosti newspaper that the Moscow government is sending mixed messages that governors find hard to decipher — wanting a victory over the virus, while also encouraging easing of the lockdown.

Fractures are also evident in the US, where about half of the 50 states are easing their shutdowns, to the alarm of public health officials.

Many states have not put in place the robust testing and contact tracing that experts believe is necessary to detect and contain new outbreaks.

And many governors have pressed ahead with reopening before their states met one of the key benchmarks in the Trump administration's guidelines for reopening — a 14-day downward trajectory in new infections.

"If we relax these measures without having the proper public health safeguards in place, we can expect many more cases and, unfortunately, more deaths," said Josh Michaud, associate director of global health policy with the Kaiser Family Foundation in Washington.

Researchers recently doubled their projection of deaths in the US to about 134,000 through early August. So far the US has recorded over 70,000 deaths and 1.2 million confirmed infections.

Worldwide, the virus has infected more than 3.6 million people and killed over a quarter-million, according to a Johns Hopkins University tally, which experts agree understates the dimensions of the pandemic because of limited testing, differences in counting the dead and concealment by some governments.

China, where the virus emerged late last year, reported just two new cases on Thursday, both from overseas, and said the whole country now is at low risk of further infections.

The country has reported no new deaths from COVID-19 in more than three weeks.

China also fired back against claims by US Secretary of State Mike Pompeo that there is "enormous evidence" that the coronavirus originated in a Chinese laboratory.

Foreign Ministry spokesman Hua Chunying accused Pompeo of "making up lies and covering up a lie by fabricating more lies."

Strict social distancing also appears to have vanquished the outbreak in New Zealand, where Prime Minister Jacinda Ardern is mulling plans to relax the lockdown by allowing gatherings of up to 100 people and holding professional sports events without spectators.

But Ardern called for vigilance.

"We think of ourselves as halfway down Everest," she said. "I think it's clear that no one wants to hike back up that peak."

Second virus wave: How bad will it be as COVID-19 lockdowns ease?