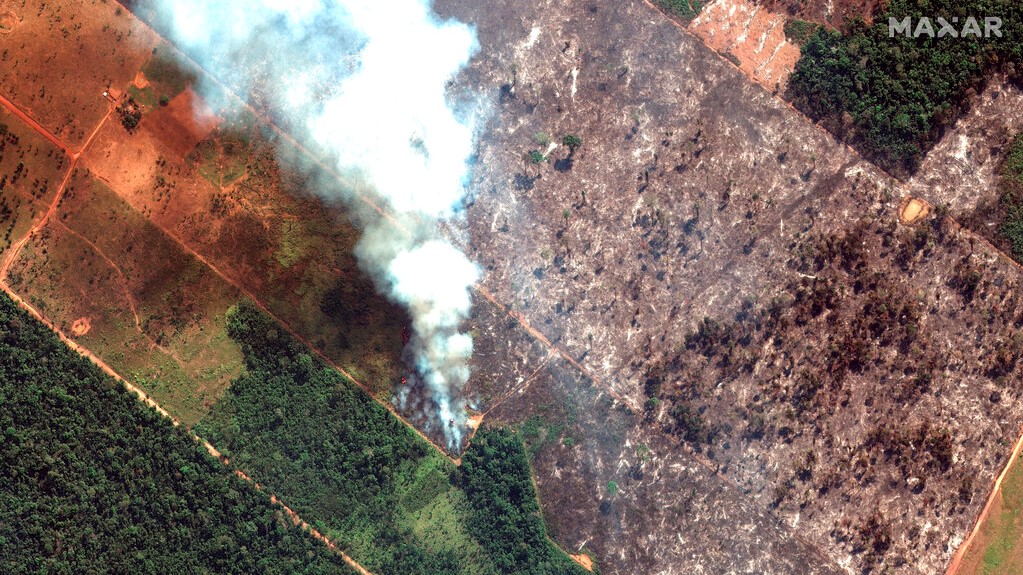 Rarely have French President Emmanuel Macron and superstar football players including Cristiano Ronaldo been on the same page, but when it comes to the fires that are devastating the Amazon, they're uniting in sounding the alarm.

Five-time world player of the year Ronaldo beat Macron to the punch with his tweet urging action on the Amazon that, by Friday morning, had already racked up more than a quarter-million likes.

Ronaldo tweeted: "The Amazon Rainforest produces more than 20% of the world's oxygen and it's been burning for the past 3 weeks. It's our responsibility to help to save our planet."

Macron's tweet later was similarly urgent, saying "Our house is burning. Literally." Macron put the Amazon fires on the agenda for the G-7 summit of world leaders that France is hosting this weekend.

Other football stars chimed in, too — unusual in the sport whose professionals are often reluctant to express views about off-pitch issues.

Paris Saint-Germain's Kylian Mbappe, a World Cup winner with France, tweeted a composite photo of rainforest in the shape of human lungs, lush and green on one side, consumed by flames on the other, and the words: "Pray for Amazonia."

And from the world of tennis came a straight-to-the-point tweet from top-ranked Novak Djokovic. "Heartbreaking," the winner of 16 majors wrote above a photo of forests aflame.

But beyond sports stars lamenting the Amazon's pain to their global audiences, it wasn't obvious what, if anything, Europe could immediately do about the situation.

Brazil was unlikely to ask for fire-fighting assistance, given how conservative Brazilian President Jair Bolsonaro has bristled over Macron's intervention.

The Brazilian leader accused Macron of sensationalism and of seeking "personal political gains in an internal matter for Brazil and other Amazonian countries." Brazil contains about 60% of the Amazon rainforest.

Even if Amazon nations did seek help, amphibious planes widely used in Europe to dump water and retardants on wildfires don't have the range to cross the Atlantic Ocean, Col. Grégory Allione, head of France's national federation of firefighters, told The Associated Press.

Larger, land-based fire-fighting planes could only reach the Amazon from Europe via a circuitous route over Greenland, North and Central America, which "would take an eternity," he said.

And European governments might not have much firefighting expertise and manpower to spare after another scorching European summer that saw record heatwaves and left many areas of Europe tinder-dry, another consequence of climate change.

Environmental campaigners said longer-term solutions were needed to preserve the Amazon. Some have accused Macron of hypocrisy, arguing that while he's adept at using Twitter to position himself as a champion for the planet, his domestic record on green issues is spotty at best. His first environment minister quit abruptly, frustrated by the slow progress fighting climate change under Macron's government.

"Beautiful speeches are no longer deluding anyone," the French branches of Greenpeace and Oxfam said in a joint appeal for stepped-up action from G-7 nations against climate change. "Emmanuel Macron cannot content himself by playing the servant at international summits to come. He must end France's inaction on the climate to be credible."