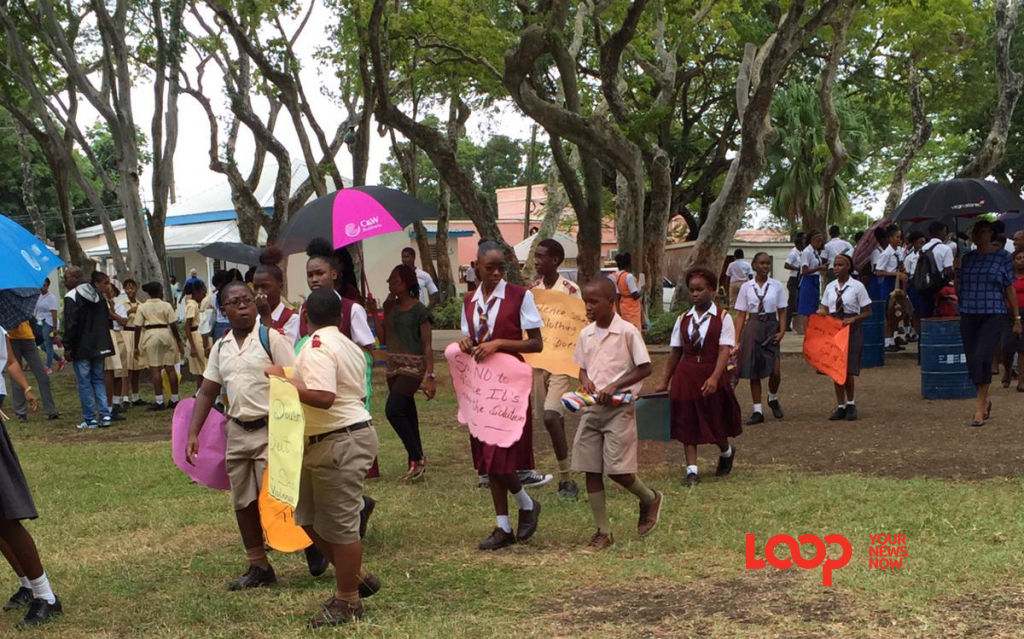 Youth in Queen's Park after the march for the Anti-violence Youth Rally.

"A small group can change the world’.

This is the advice given to students who attended the ‘National Peace Rally: Youth Against Violence’ this morning, December 11, 2019. Despite the fact that rain threatened to stop the event, this did not stop the students from giving their full participation in the rally while under umbrellas.

The streets of Bridgetown were filled with chants, music and encouraging words as students rallied against violence in schools. The rally began with a march from Jubilee Gardens, St. Michael and concluded in Queens Park, St. Michael.

Schools such as The Combermere School, The Alleyne School, Graydon Sealy Secondary, The Barbados Seventh-Day Adventist Secondary School and many others along with the host of the rally - The Frederick Smith Secondary School took time out of their schedules to participate in the march.

The Frederick Smith Secondary School has made it their duty to rally against youth violence in schools. This comes as a result of the recent stabbing of a 16-year-old prefect on the school premises. The students of the school then decided that something must be done in order to rectify the plague of school violence. Therefore, in collaboration with the Government Information Service of Barbados, the ‘National Peace Rally: Youth Against Violence’ was created.

Minister of Education Sanita Bradshaw, as she joined the students along the busy streets of Barbados' Capital, thanked the organisers of the rally and The Frederick Smith Secondary School for hosting such an event as this. She also asked the public to support the youth as they advocate against violence in schools across Barbados.

As the march came to a halt, students, teachers and spectators gathered in Queens Park, St. Michael. During the opening ceremonies, a Frederick Smith student relayed the school’s agenda to the audience for the fight against school violence. He spoke about the request for more guidance counsellors in schools. He also encouraged students from all secondary schools to join the ‘We Students Movement’ organised by Harrison College.

The ‘We Students Movement’ is designed to allow all secondary school students to share their concerns and opinions in relation to ongoing school matters.

A teacher of The Frederick Smith Secondary School spoke to Loop News about her thoughts on the youth rally. She said that she believes it should make a change but this can only happen if we work together. We must always have positive outlooks and always try to uplift the youth. She wants for her school to ‘rise up’ and give a helping hand to those who are in need and who have challenges. "We should all shed a positive light on them and try to show these students love.

"Join the youth of Barbados as they take their stance against the violence in their schools."