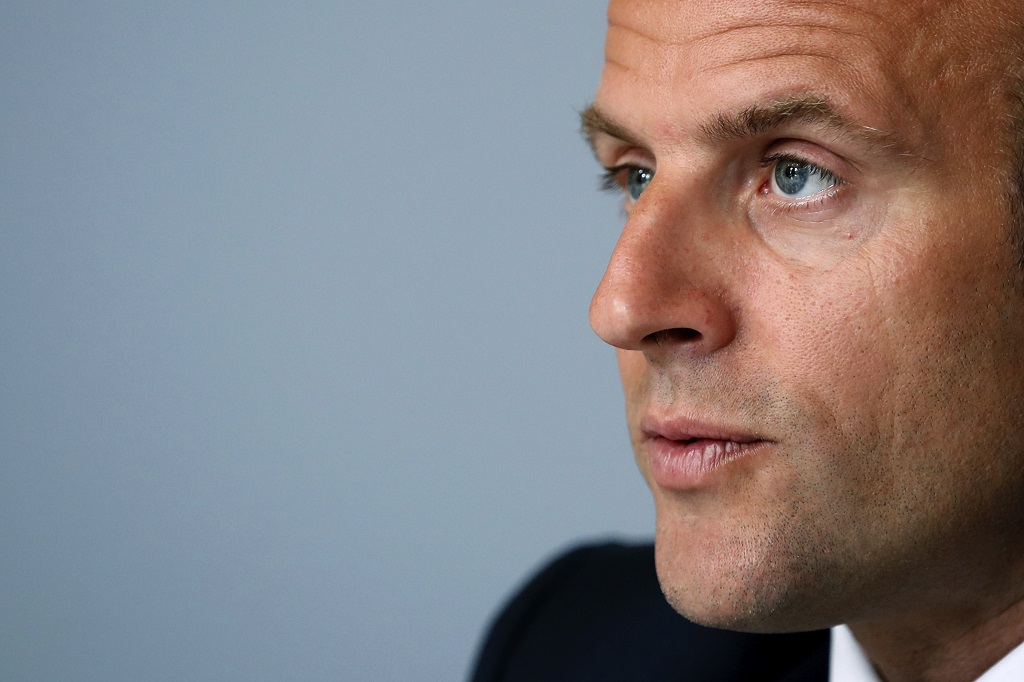 FILE - In this Monday, May 4, 2020 file photo, French President Emmanuel Macron listens during an international video conference call on vaccination, at the Elysee Palace in Paris. (Gonzalo Fuentes/Pool via AP, File)

French President Emmanuel Macron has vowed Sunday to stand firm against racism but also praised police and insisted that France wouldn't take down statues of controversial, colonial-era figures, as he addressed the issues for the first time since George Floyd's death in the US.

In a televised address to the nation on Sunday evening, Macron called for the nation's "unity" at a key moment when the country is trying to put the coronavirus crisis behind while being shaken by a series of protests against racial injustice and police brutality.

Echoing American protesters, demonstrators in France have expressed anger at discrimination within French society, particularly toward minorities from the country's former colonies in Africa. 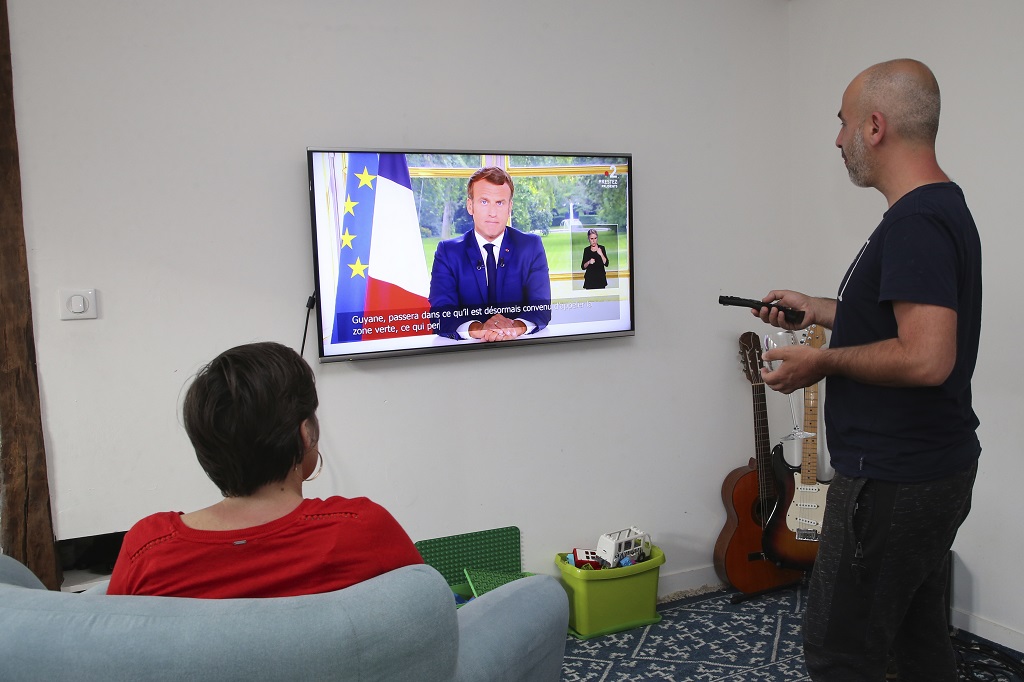 Unusually for a French leader, Macron acknowledged that someone's "address, name, colour of skin" can reduce their chances at succeeding in French society, and called for a fight to ensure that everyone can "find their place" regardless of ethnic origin or religion.

He promised to be "uncompromising in the face of racism, anti-Semitism and discrimination."

However, he insisted that France will not take down statues of controversial, colonial-era figures as has happened in some other countries in recent weeks.

Amid calls for taking down statues tied to France's slave trade or colonial wrongs, Macron said "the republic will not erase any trace, or any name, from its history ... it will not take down any statue."

"We should look at all of our history together with lucidity" including relations with Africa, with a goal of "truth" instead of "denying who we are," Macron said. 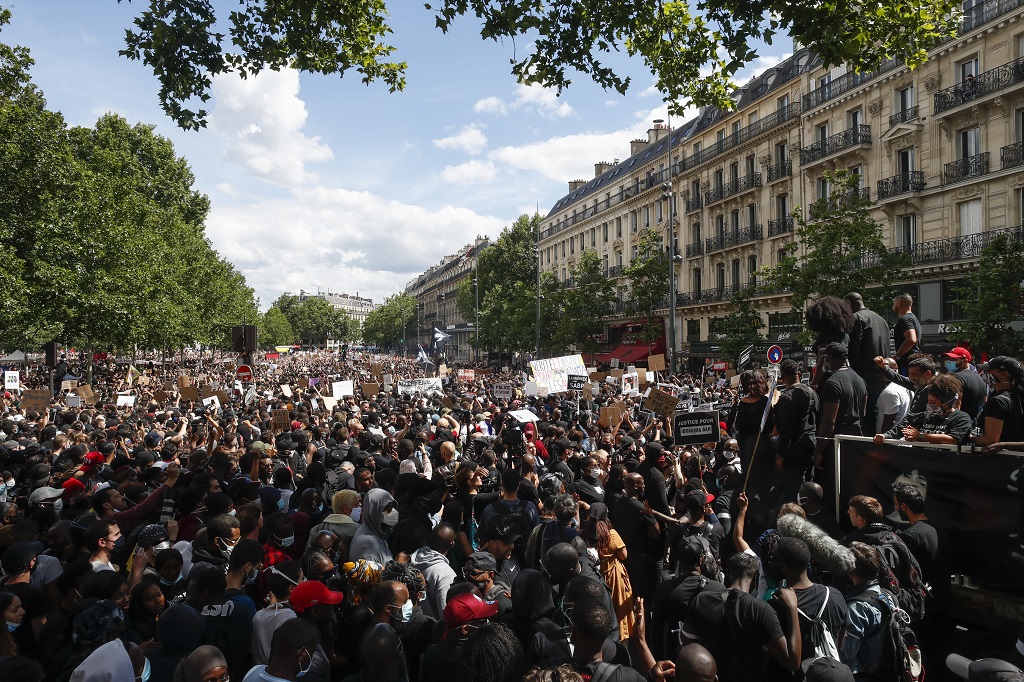 [People listen to Assa Traore, right, during a demonstration against police brutality and racism in Paris, France, Saturday, June 13, 2020, organised by supporters of her brother Adama Traore, who died in police custody in 2016 in circumstances that remain unclear despite four years of back-and-forth autopsies. The demonstration is expected to be the biggest of several demonstrations Saturday inspired by the Black Lives Matter movement in the US, and French police ordered the closure of freshly reopened restaurants and shops along the route fearing possible violence. (AP Photo/Thibault Camus)

He didn't address accusations of police violence but said forces of order deserve "the nation's recognition."

Meanwhile, his government is facing growing pressure to confront racism and police violence.

At least 15,000 people demonstrated in Paris on Saturday, the latest in a string of French protests galvanized by the May 25 death of Floyd — a black man who died after a white Minneapolis police officer pressed a knee to his neck — and the Black Lives Matter movement, but increasingly focused on France's own tensions between police and minorities.

In response, the government banned police chokeholds and vowed to stamp out racism among police — but that has now angered police unions, who say they're being unfairly painted as white supremacists and staged protests of their own.

"We must not hesitate to name things, to say that a skin colour is not neutral," she wrote. She called on the French to "confront our memories" about their history and find a "shared narrative" with former colonies. 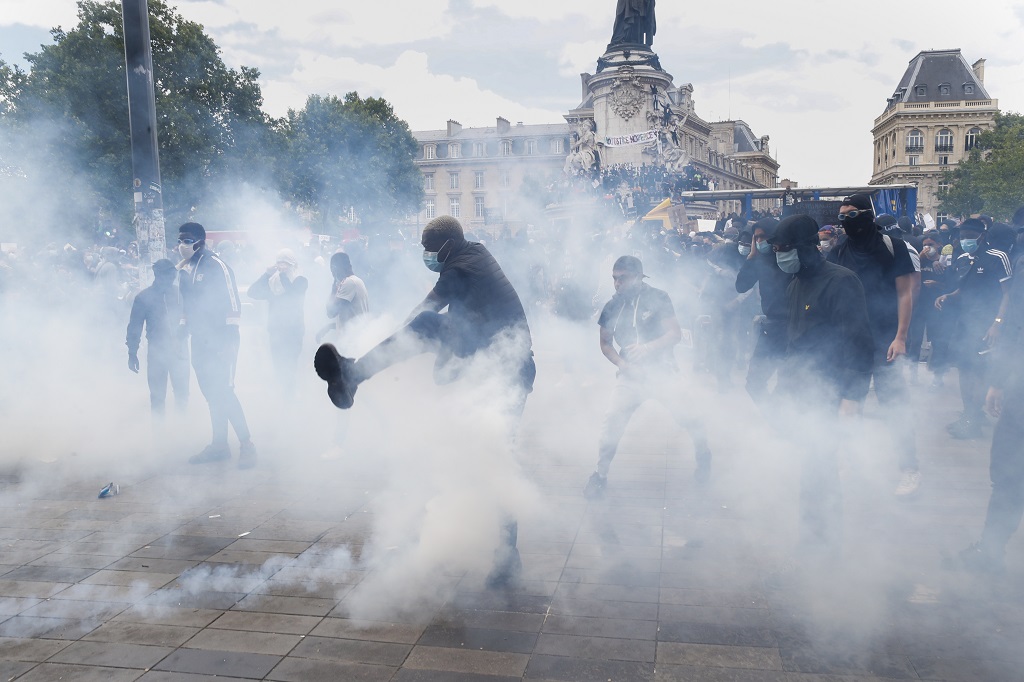 [A man kicks a tear gas canister during a march against police brutality and racism in Paris, France, Saturday, June 13, 2020, organised by supporters of Adama Traore, who died in police custody in 2016 in circumstances that remain unclear despite four years of back-and-forth autopsies. The march is expected to be the biggest of several demonstrations Saturday inspired by the Black Lives Matter movement in the US, and French police ordered the closure of freshly reopened restaurants and shops along the route fearing possible violence. (AP Photo/Thibault Camus)

Macron's speech also sought to "turn the page" of the virus crisis, as France will reopen nearly everything starting Monday.

Restrictions had started being gradually eased on May 11 after two months of stricter lockdown.

"We are going to get back our way of life, our taste for freedom," Macron said. "In other words, we are going to rediscover France fully again."

Restaurants in the Paris region will be allowed to open indoor spaces starting on Monday — instead of outdoor seating only.

Macron vowed to make from saving as many jobs as possible his top priority.

A forecast last week from the Organization for Economic Cooperation and Development showed France's economy will suffer more than most from the coming recession.

The economy is expected to shrink at least 11 percent this year, pushing many out of work and torpedoing Macron's goals of bringing down unemployment, rehauling the retirement system and making France more globally competitive.

France is reopening its borders with other European countries at midnight and will start allowing visitors from other continents on July 1.

Despite having one of the world's best health care systems, France was dangerously short of all kinds of masks and testing capacity as coronavirus patients overwhelmed intensive care wards in March.

More than 80 lawsuits have been filed accusing his government of manslaughter, neglect or otherwise mishandling the virus crisis.

Macron sent in the army to help and ordered strict lockdown measures that slowed the spread.

But nearly 30,000 people have died, about half of them amid residents of nursing homes, and more than 150,000 have been infected.

More than 200 new virus clusters have emerged since France started reopening May 11, according to the national health agency.

"Dozens of thousands of lives have been saved by our choices, our acts," Macron stressed.