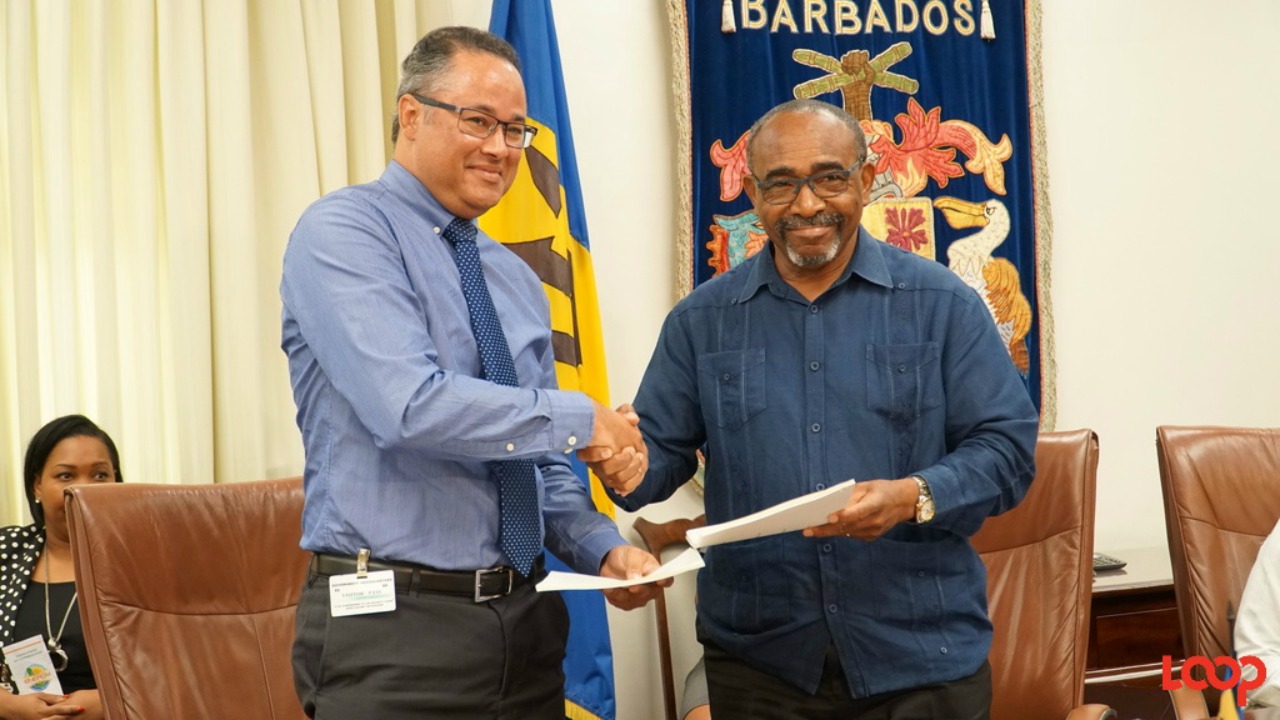 As government grapples with the task of reducing the fiscal deficit, the Inter-American Development Bank (IDB) and European Union (EU) are funding a retrofitting project which will cut the country’s fuel bill by millions of dollars, and save foreign exchange.

Senator the Hon. Darcy Boyce, Minister in the Office of the Prime Minister with responsibility for Energy, Telecommunications, Immigration and Invest Barbados, told the media recently:

“This project saves us a couple million dollars a year, $3Million a year or so. It is a small amount for in context of the economy of Barbados but it is a start for us to save some money.

“And when that is combined with the work that is going on to retrofit 13 government buildings with solar PV, it begins to add up.

Signing the contract was Senator Boyce and the Managing Director of the Barbados Light & Power Co. Ltd. Roger Blackman.

Blackman shook hands with all parties involved in making the five-year programme a reality and said:

“Barbados Light & Power Co. Ltd. will work with all stakeholders including government and investors such as the IDB and the European Commission to find the right energy solutions for the island.

“We believe in meeting the challenge of energy change together.”

Proudly, he declared that despite the contract stating that 85 percent of the street lights will be switched out, “in fact, the Barbados Light & Power Co. Ltd. has taken the decision to any time that we change any of the existing HPS (High-pressure sodium) street lights we change it with an LED lamp, so it is in fact a 100 percent transformation of the streetlights over the next couple of years.”

Therefore the savings can be greater than originally projected.

Related article :Players in the renewable sector should have no fear

There are three components of the project being rolled out, but street lighting component is “integral and it is to reduce electricity consumption and to create savings in the electricity bill in terms of street lighting,” stated Permanent Secretary in the Division of Energy, Jehu Wiltshire.

The IDB Representative, Juan Carlos De La Hoz Viñas said that the hope of the IDB is to “promote energy efficiency and renewable energy use in small and medium enterprises in Barbados, which are a pillar of the economy.

Meanwhile the Head of the Green Economy and Resilience Section at the European Commission, Peter Sturesson said that they are in it for the long haul to make sure the project is completed as soon as possible.

“I assure you that from the EU that we will continue to provide support for the project through our technical and administrative efforts through financing to be able to maintain the momentum of this project reaching a timely completion,” he asserted.

IMF ready to step in and help