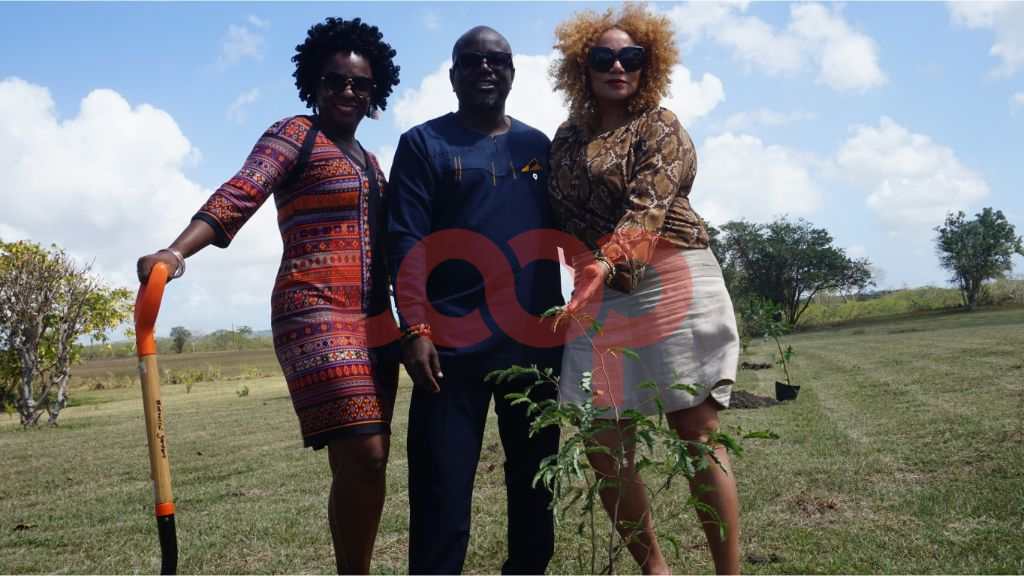 Members of the visiting Ghanaian Tourism contingent aided Barbados along on its quest to become a greener and more environmentally friendly nation.

They took part in the Million Trees in 2020 tree planting initiative this week.

The four members of the Ghanaian Tourism Authority have been on the island for a few days but have taken in the sights and sounds of the island with great anticipation and admiration as they exchanged ideas and experiences with the focus on bringing Ghana and Barbados even closer.

Planting four fruit trees - gooseberry, cherry, mango and tamarind on the grounds of The National Botanical Gardens at Waterford, St Michael, the Ghanaians' contribution was part of Barbados' legacy-building exercise. The trees were chosen by the National Conservation Commission's Dendrologist Nigel Jones specifically for the occasion.

Before the tree planting, Mr Akwasi thanked Bajans and the BTMI for their hospitality over the past few days as well as expressed the vested interests in maintaining relationships between the two countries.

"Over the past few days that we have been here, we have been amazed by the warmth of the people here, the Bajan people. The hospitality we have received from the BTMI is amazing. We will be leaving with very fond memories and for some of us, we will be coming back quickly because we believe we have a shared history, shared responsibilities towards each other, shared opportunities and shared goals."

He further went on to express admiration for Barbados' initiative, for being small but thinking big and hoped to open communication between Barbados and Ghana.

"Coming in here and seeing what you are doing as a small country but with big dreams and big ideas is something that we are taking back. And we believe that we can open the channel for communication between the people of Ghana and the Bajan people."

Director of the BTMI, Petra Roach stated that the push to establish links between Barbados and Ghana spoke to the deep levels of connection between the two nations.

Roach expanded on some of the exciting goals that were on the cards for the near future in sports, fine arts and music. "There's loads of exciting things happening. In the short term, we're looking at bringing the Ghana polo team here to play against the Barbados Polo team. We're looking to have an exchange in terms of art with people like Sheena Rose going from Barbados to do an exhibition in Africa and conversely bringing some African talent here to Barbados. We're also talking about the music and we have decided to create a Barbadian and Ghanain Jingle which we will use to juxtapose The Year of Return and We Gatherin'."

Prime Minister Mia Mottley had previously travelled to Ghana herself back in 2019 during the countries Year of Return celebrations which were initiated by the Ghanaian President Nana Akufo-Addo, and was used to mark the 400th anniversary of slaves landing in the United States of America.

Seen widely as a success by Ghanaian officials and many who attended the festivities, it brought an additional 237,000 visitors to shores of Ghana alone between January and September of 2019. Seeing the Ghanaian Tourism industry rise by 45 per cent compared with the same period for the previous year, there was a significant increase namely in visitors from the US and UK.

This initiative very much mirrors Barbados' own We Gatherin' celebrations and Barbados stands to learn a lot from the experience that the officials from the Ghanaian Tourism Authority have offered.

Lady NV returns to Ghana: My journey started with a thirst, sankofa