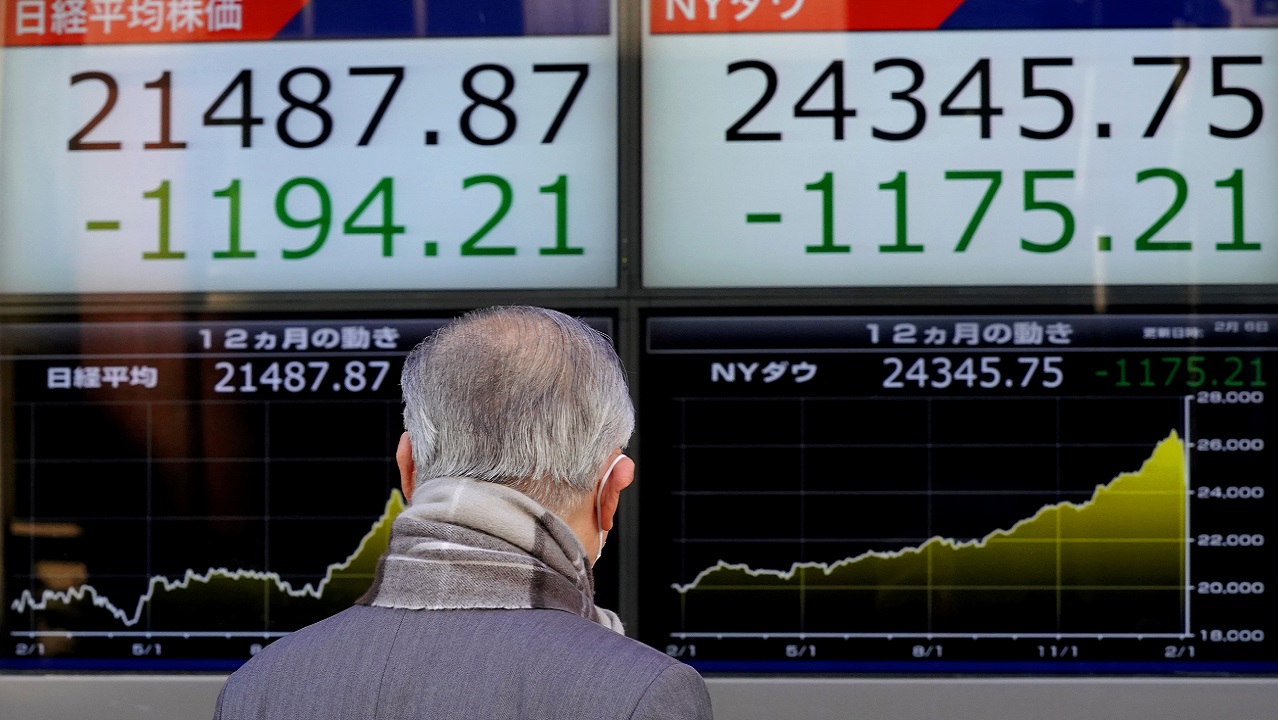 (Image: AP: A man looks at an electronic stock indicator of a securities firm in Tokyo on 6 February 2018)

Stock markets around the world took a battering on Tuesday, following a dramatic sell-off on Wall Street that triggered concerns that a potentially healthy pullback from record highs could morph into a more protracted crash.

Hopes that Wall Street won't repeat the scale of Monday's losses helped limit the selling during European trading hours. Futures markets suggested another, but more moderate drop, in the US, with the Dow and S&P 500 futures down 0.8 percent and 0.2 percent.

The market mood turned decidedly fearful on Monday when the Dow Jones industrial average posted its biggest percentage decline since August 2011, driven by fears the US Federal Reserve will raise interest rates faster than expected due to a pick-up in wages.

That has fed into widespread concerns that markets were stretched following a strong run over the past year that pushed many indexes to record highs. Some also question the possible role of computer-driven algorithmic trading in the precipitous declines or even the ramifications of the rise and fall in the value of virtual currencies, notably bitcoin.

"If investors look at underlying earnings growth and the fundamentals of the global economy, there is reason for optimism," said Neil Wilson, senior market analyst at ETX Capital.

"However once this kind of stampede starts it's hard to stop."

Though many stock indexes are close to where they started the year, the losses mark a reversal of fortune following a sustained period of gains, a pullback that some market pros have been predicting for some time.

Stephen Schwarzman, the chairman and CEO of financial firm Blackstone, warned recently of a potential "reckoning" in markets.

A 10 percent drop from a peak is often referred to as a "correction" while a bear market is generally defined as a 20 percent or so drop in indexes. The S&P 500, for example, is one of the major fallers, declining 7.8 percent since its latest record high on Jan. 26.

"Seemingly the only hope for the markets at the moment is that investors suddenly decide that the sell-off has been a bit overdone," said Connor Campbell, a financial analyst at Spreadex.

Despite the sea of red in global stock markets, there are hopes that the retreat won't last long given that global economic growth has picked up and the financial system is more robust since the financial crisis.

"That is not to say that we won't see further falls in coming days, but in an environment where growth is good and earnings are expected to rise globally, there are decent underpinnings," said James Knightley, chief international economist at ING.

The catalyst for the latest sell-off came in jobs figures last Friday showing that wage growth in the US was creeping higher. For many traders, that was a sign that the Fed will have to pick up the pace of its rate hikes — higher wages have the capacity to fuel inflation.

On Monday, the Dow finished down 4.6 percent at 24,345.75, while the S&P 500 sank 4.1 percent, to 2,648.94. Falls like this have not been registered since August 2011 when investors were fretting over Europe's debt crisis and the debt ceiling impasse in Washington that prompted a U.S. credit rating downgrade.

Still, while some financial assets became more attractive to investors as perceived havens of value. Gold, for example, was up 0.4 percent at $1,343 an ounce.

How Trump's immigration order could hurt the US economy