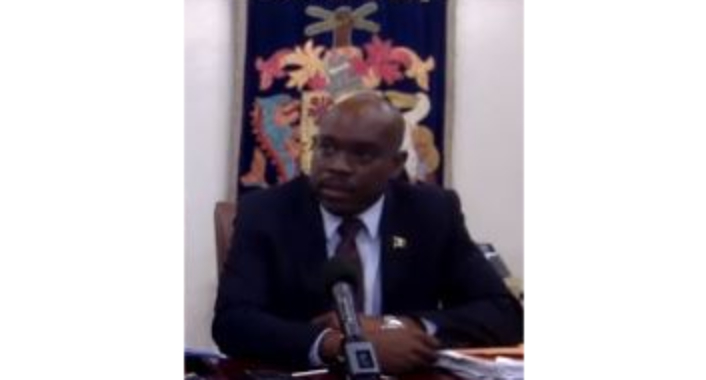 Business persons across Barbados will be breathing a sigh of relief.

This now that Government has removed the application of the National Social Responsibility Levy (NSRL) from goods which were in the port before it's repeal date.

Acting Minister of Finance, Ryan Straughn, explained the initial rationale behind how the tax would be removed during a press conference this afternoon:

"As you are all aware, the National Social Responsibility Levy was repealed effective July 1st, 2018, and what that essentially meant from a perspective of goods that would enter the country, that certainly those good would no longer attract the 10 percent that would have been levied before...

"Part of the issues was that last year when the NSRL was raised from two percent to 10 percent on July 1st, there was a directive issued from the previous Minister of Finance that would of allowed the goods that were already landed to only pay the two percent, rather than pay the 10 percent last year. Now in the same vein then we anticipated that that would remain the case this year, such that persons who would have had goods landed into the port prior to July 1st, should have attracted the 10 percent, vis-à-vis zero percent which is applicable from July 1st, 2018."

"Now having consulted the actual tax in the law we recognise obviously that persons are allowed to pay zero percent in National Social Responsibility Levy even though the goods were landed before...

"Therefore for the purpose of the public and definitely the importers, we've given the directive to the Customs Department that all good in the port shall attract zero percent National Social Responsibility Levy since it's been repealed. Therefore from today all of those goods should be cleared through the port with the normal duties and taxes that would apply, with the exception of the National Social Responsibility Levy."

Straughn further added that while structures have been put in place to address this matter urgently, Government would have to make some changes to the law"

"In principle having benefited from just paying the two percent last year for the period of time for which the tax became effective, the reality is that we as an administration actually want to abide by what the law actually said.

"We've made some improvement on the technological side to facility business, but we haven't made the change in respect to the law as it relates to when goods actually enter the country and some definitions that would need to be adjusted on that front."

He also stressed that the Barbados Revenue Authority (BRA) will also have to be updated:

"There needs to be an update to the system with respect to the Barbados Revenue Authority, given that they support the Customs Department. Therefore those would be made overnight, becuase as you could imagine given the directive that was there before, the goods that would have been landed last week would have still reflected the 10 percent given that that was the principle that was being followed.

"So therefore given that that was inconsistent with what the law actually says, we're gonna make those adjustments overnight just to make sure that those persons with goods in the port can actually clear those at zero percent, given the repeal of the levy."