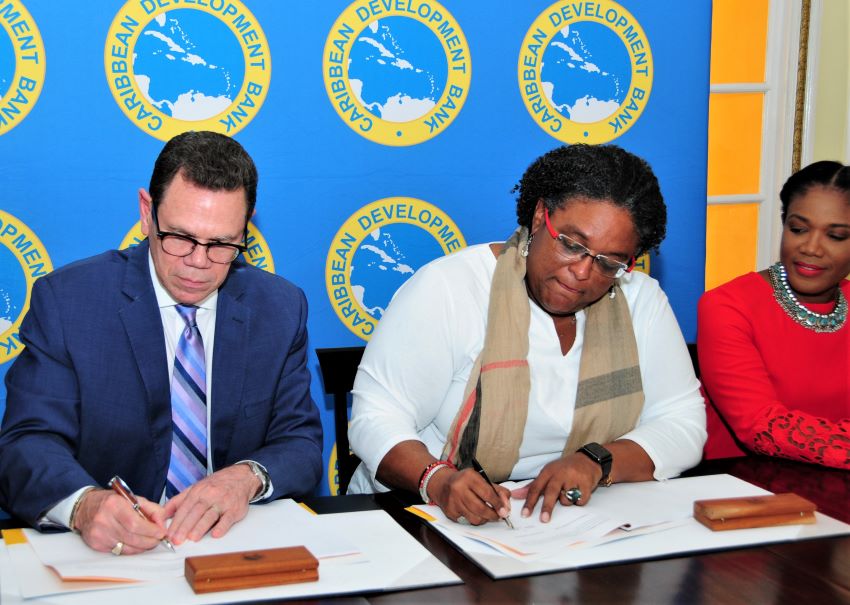 Government has received a US$75 million loan to support the Barbados Economic Recovery and Transformation (BERT) programme from the Caribbean Development Bank (CDB).

“We are only in a position to sign because we made progress….  There is reform fatigue, but you cannot get tired when we have come so far and have sacrificed so much,” Mottley said.

She expressed her appreciation for the funding option, noting that Barbados did not have a lot of options with respect to concessional funding.

“You have joined us in this battle globally that the arbitrary determination that the access to concessional funding is based on per capita income and GDP does not meet the reality of our circumstances. There is inherent vulnerability to exogenous shocks; be they from climate, trade or currency or international events that literally put us on the back foot,” she said.

She pointed out that the most evident of such was the passage of Hurricane Dorian which left a middle income country reeling, while larger countries, like China, were classed as low income countries for the purposes of the World Bank.

“I give you that background so the people of this country would understand why this loan and the other loans over the last 18 months from the Caribbean Development Bank are as important to the Government and people of Barbados as they are, because without this we would not have access to much funding,” Mottley said.

She added that the policy-based loan would go a long way towards continuing the reforms.

Dr Smith explained that the CDB monitored the progress of the reforms in Barbados over the last 18 months and were encouraged by the resolve and commitment of Government to the plans and targets of the BERT programme.

“My signing of the loan agreement with Prime Minister Mottley this afternoon is an acknowledgement of our satisfaction with the progress today.  We will continue to provide the Government with much needed financial and technical support to continue its efforts,” he said.

Dr Smith added that the CDB had already programmed BDS$225 million to directly support the Government’s reform programme through a series of four proposed policy based loans, the first of which was provided in October 2018, to the tune of BDS$75 million.

He said that the second policy-based loans build on the initial milestones in the first operations towards strengthening the fiscal framework, and over time involving overall economic management and providing a more enabling environment for private sector development.

“Over the past 18 months, the CDB has approved almost BDS$220 million to the Government of Barbados, including funding for strategic capital investments which are also vital for the long term success of the BERT programme,” the President said.

He disclosed that the bank had also approved over BDS$40 million for the Grantley Adams International Airport, for its Pavement, Rehabilitation and Expansion project, and US$29 million for the south coast outfall project.

In addition, Dr Smith pointed out that over the next two years the bank was expected to prepare two more policy-based loans totalling BDS$75 million.

“Our success in getting board approval over the next two rounds will be contingent on the Government’s demonstration of sustained commitment to the reform agenda and targets.  We will continue to work very closely with your Government to safeguard the reform momentum and maintain the positive results of the BERT plan,” he said.

Government to save $20 million on Innotech deal

Barbados struggling to get out of economic slump