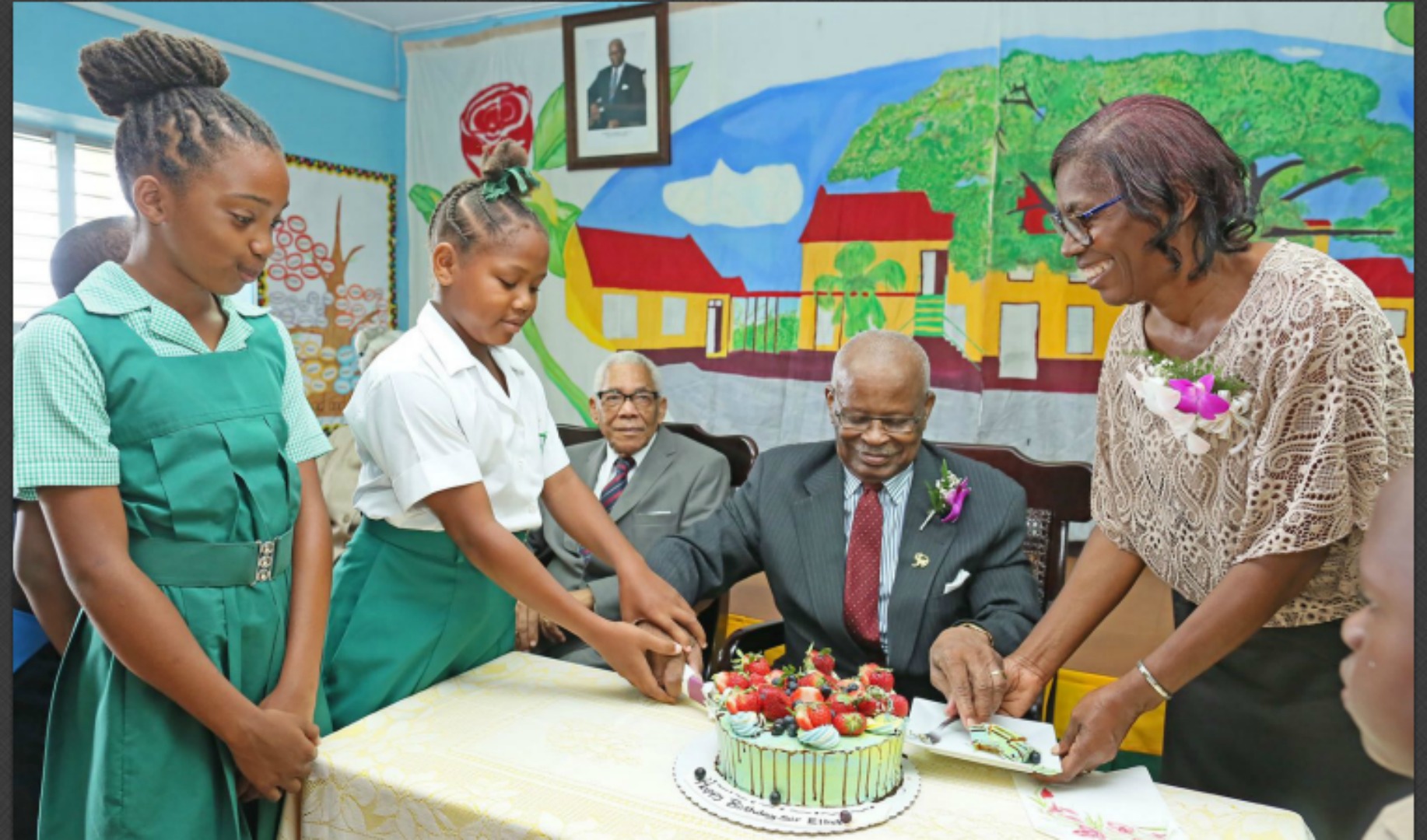 Former Governor General Sir Elliott Belgrave on a visit to the then Boscobel Primary School. (FILE)

Not 30 seconds after reading that Barbados will be working towards attaining republic status before November 2021, the Governor General Her Excellency Dame Sandra Mason also revealed that the her post will now be a more engaging one.

In the past some previous governors general tried to be more in the public's eyes.

Sir Elliott Belgrave, Dame Sandra's predecessor had a school programme where he went around the island visiting primary school children ages four to eleven and interacting with them, while sharing nuggets of wisdom and history here and there on his journey. After his June 2017 retirement, his primary school alma mata Boscobel Primary, was renamed the Elliott Belgrave Primary School back in December 2017.

The sixth Governor General the late Sir Clifford Husbands' love was agriculture and as such he pushed this agenda in the schools.

When he passed away, the Royal Commonwealth Society (Barbados) wrote: "During his tenure as Governor General he also inherited the post as Patron of the Royal Commonwealth Society - Barbados Branch and served us with distinction. To honour his service to the RCS, the Sir Clifford Husbands Agricultural Challenge Shield and Competition was conceptualized. This is an annual competition where secondary school students can showcase their ideas of how to make agriculture more interesting and innovative. It is open to those students of the Caribbean Secondary Education Certificate (CSEC) Agriculture syllabus."

Now, from the Throne Speech read on September 15, the island has learnt that Dame Sandra, the eighth Governor General of Barbados will head some new initiatives.

Under the subheading 'Increasing The Engagement of Our Governor General', Dame Sandra read:

"For almost 50 years, the ceremonial, administrative and social functions of the Governor General have remained largely the same. It is now proposed to add to them, the following list of activities: The Governor General’s Charity and Trust which will be overseen by a Board and support worthy national causes, the establishment Of Fine Minds For Barbados, a Think Tank of Barbadian academics and skilled nationals in the diaspora to ensure we use the talents of all Barbadians in support of national challenges; the Governor General’s Annual Lecture; and Purpose Filled Youth, a training and motivational initiative for Barbadian youth, which will be conducted at ages 11 and 16."

But what confused Barbadians was the introduction of this proposal in light of the deadline for Barbados becoming a republic.

With an approximate 450 days before Barbados becomes the Republic of Barbados, Dame Sandra added, "This programme will be continued until such time as there is further discussion on the transition to republic status."

This led some Barbadians to wonder about the proposal and how much can be achieved or attained within the small time frame. Some persons are questioning how long it will take to setup the Charity and Trust with all the red tape and processes, plus how costly the initiatives could be considering their limited lifespan.

Under a Republic, Barbados would no longer have a Governor General, who is the Queen's representative, but would instead have a President and a Prime Minister.