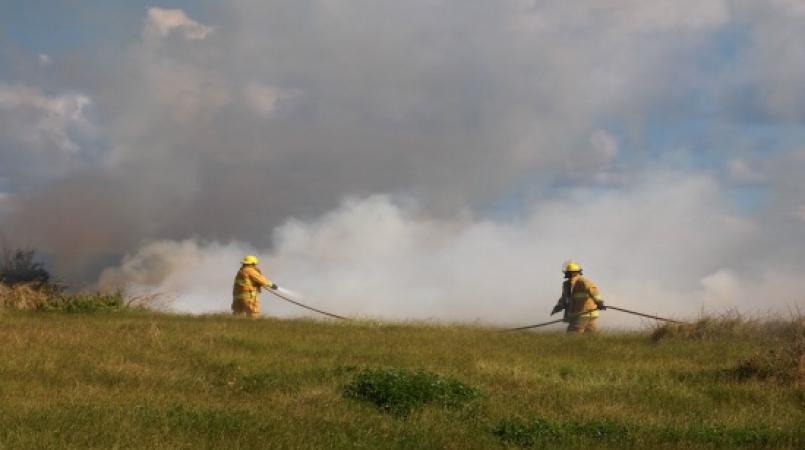 With a total of 749 grass fires recorded in 2016, and seven so far for 2017, the Barbados Fire Service is already busy battling grass fires.

Up to Sunday afternoon one fire tender responded to a grass fire in Gemswick, St. Phillip. Three fire officers spent close to 35 minutes battling the intense grass fire which threatened to engulf a house.

Fire Officer Andrew Taylor in the Research and Planning Unit told Loop News 2016 was a tough year for grass fires as they consume a lot of resources and are also difficult to investigate.

“To be honest we have a very difficult time investigating grass fires. We haven’t caught anyone in the act to date for burning indiscriminately. There was someone who was charged back in 2014 or 2015 for setting grass fires in Christ Church. But by the time we [fire service] get to the scene persons are already long gone.”

He said the number of grass fires so far for the year is on par with what occurred in 2016 but there is expected to be a spike during the dry season from January to June.

Another aspect which continues to be a bother for the Fire Service is complaints from residents in neighbourhoods where people burn rubbish indiscriminately noting there was no specific legislation on the books to address this issue.

“We still get a lot of calls coming into the control room for persons making complaints about neighbours burning rubbish. Normally you are only supposed to burn rubbish between 6am and 6pm, Monday to Friday, you’re not supposed to burn on weekends or bank holidays. But there are some people who burn rubbish every single day from Sunday to Sunday. There is no legislation really strong enough to stop persons from burning indiscriminately. It could lead to persons being aggravated and going over to the neighbour’s house and causing an argument which may lead to something physical."

Taylor also said communication amongst neighbours is essential to prevent neighbourhood disputes over the burning of rubbish from escalating into more serious situations.

Fire service not here to put out neighbourhood feuds