Great St Lucia beaches to wind down on after Carnival 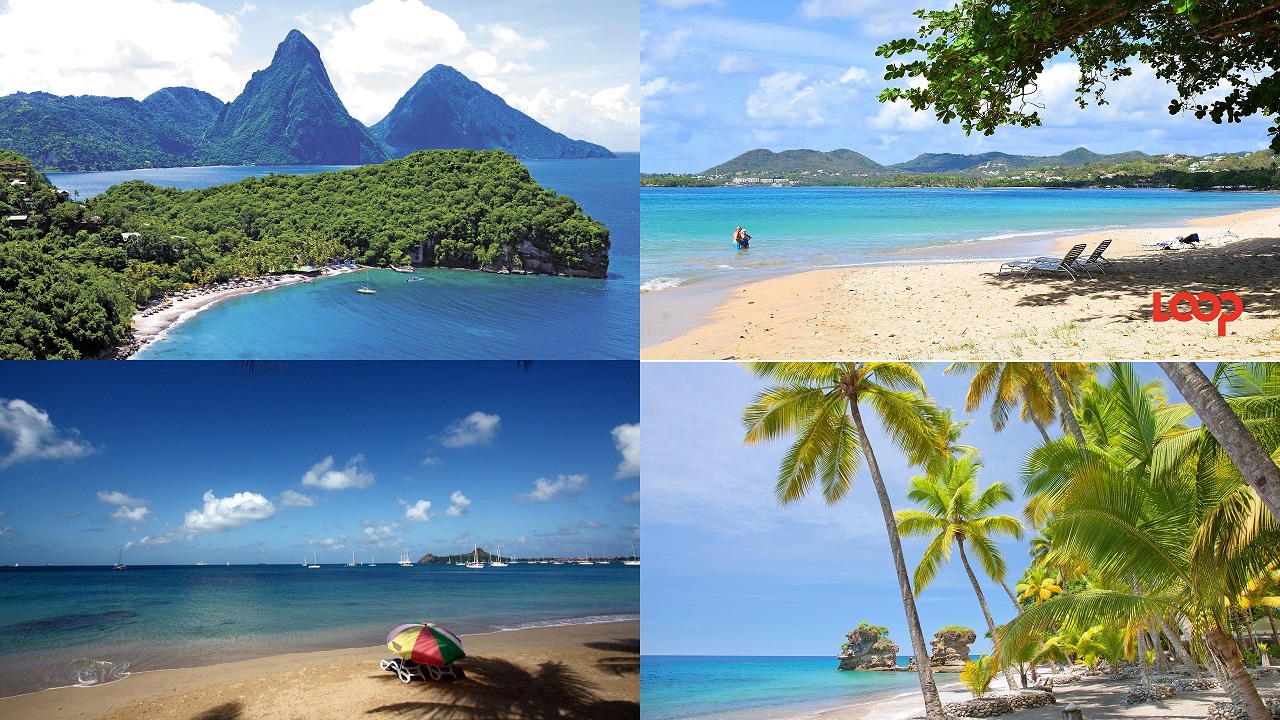 It’s Carnival season – but once the party is over, you may well need a few days of R&R to recover. But where should you go? Here’s Loop’s guide to some of the great beach options on this beautiful island.

Reduit beach: This long sweep of sand is probably St Lucia’s busiest beach. It lies north of Castries in Rodney Bay, St Lucia’s premier beach and water sports hub, and offers beachgoers great views across to Pigeon Island. There’s plenty to do – you can sign up for a variety of windsurfing, sailing and snorkelling trips, or you can just take it easy and relax on a lounger (there are plenty for hire). Reviewers say the water is calm and good for swimming, but offer two tips: Avoid the middle of the beach when big cruise liners are docked and be aware that vendors can be persistent. There are several places to eat on the beach. Spinnakers gets good reviews, or you can buy something from a passing vendor. Otherwise, Rodney Bay has lots of good places to eat and shop. 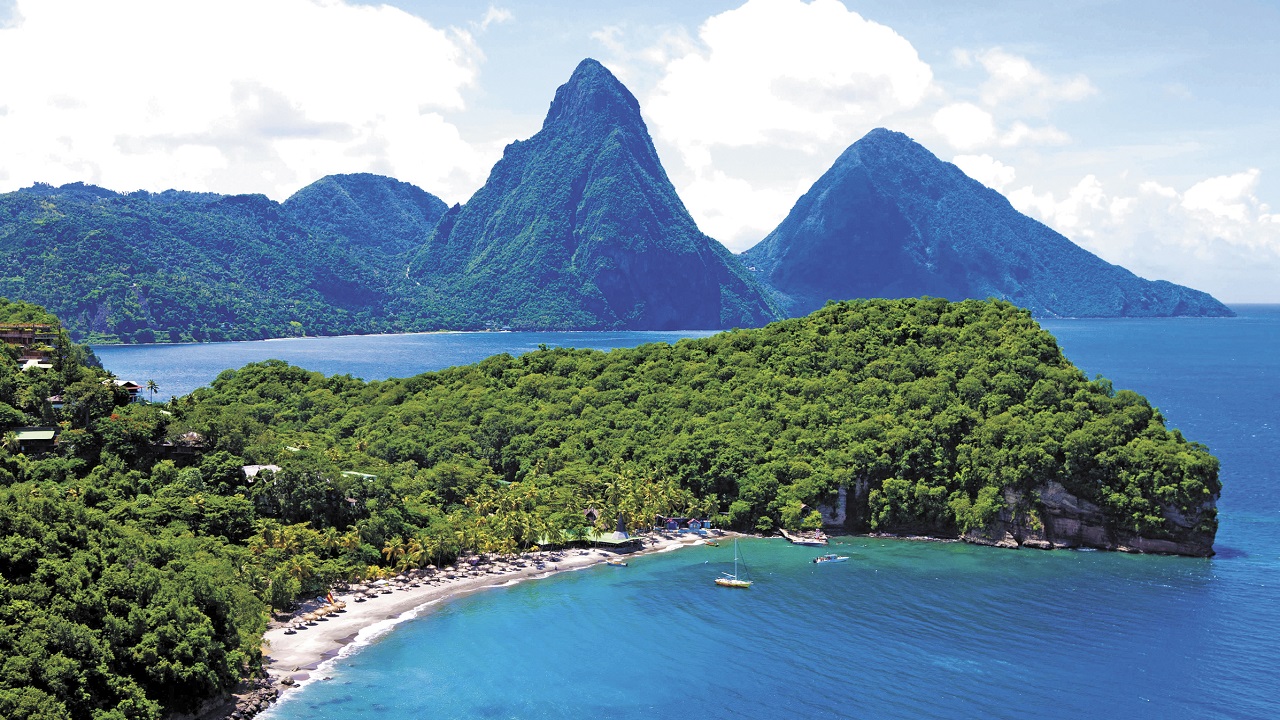 Anse Chastanet: This is a relatively slim beach fringed by palm trees that largely caters to two top-notch resorts, Jade Mountain and Anse Chastanet. But like all beaches in St Lucia, it’s open for public access. You can drive there (the road can be a bit tricky, travellers report) or get dropped off by boat, which is how many visitors arrive. The beach is black volcanic sand and its main draw is the reef area to the left of the beach (as you face the sea), which is good for snorkelling. Visitors report seeing lots of different types of fish and coral. There’s a dive shop on the beach and you can also rent loungers from the hotels for a fixed price. One caveat – some people have reported getting stung by jellyfish. 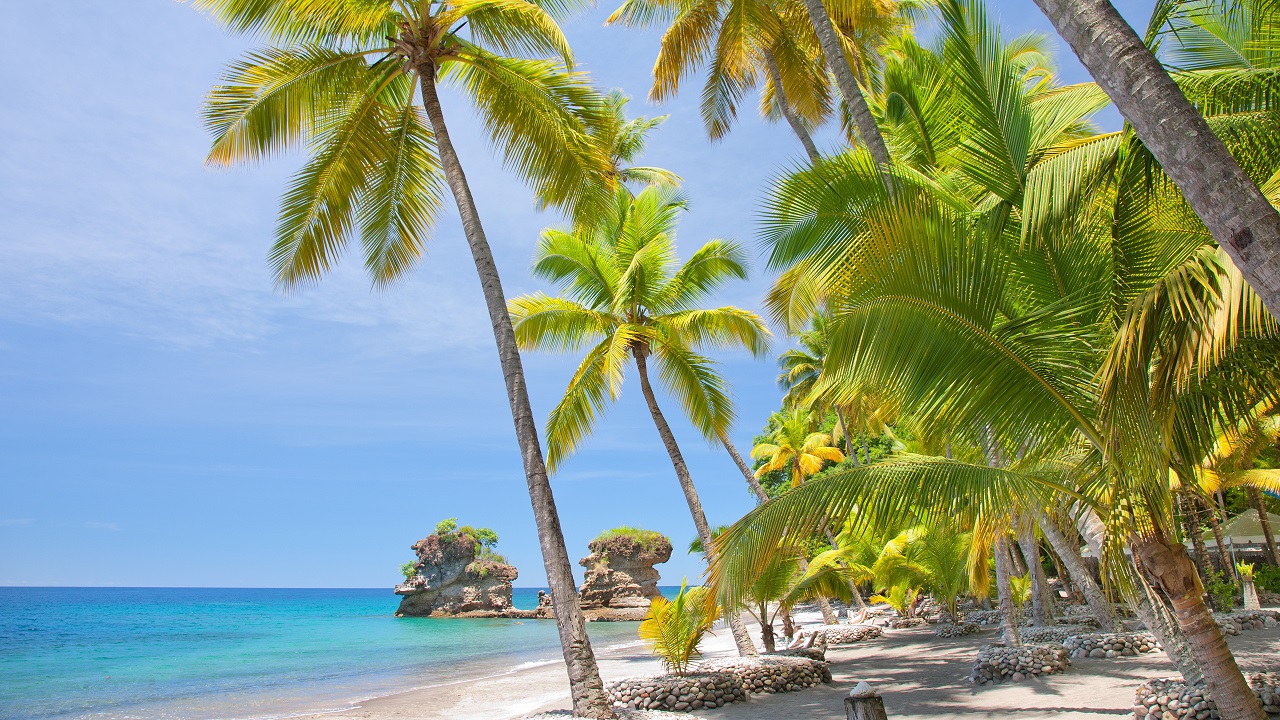 Anse Mamin: A 10-minute walk from Anse Chastanet (or a short boat ride) is Anse Mamin, another black sand beach. Visitors say it’s much less crowded than its neighbour but has good facilities – you can hire loungers and the bar and grill gets really good reviews, particularly for its burgers (fish and veggie options also available). The snorkelling isn’t as good here, though visitors reported seeing plenty of fish. But there’s an added attraction – you can explore the ruins of an old sugar plantation in the jungle behind the beach. 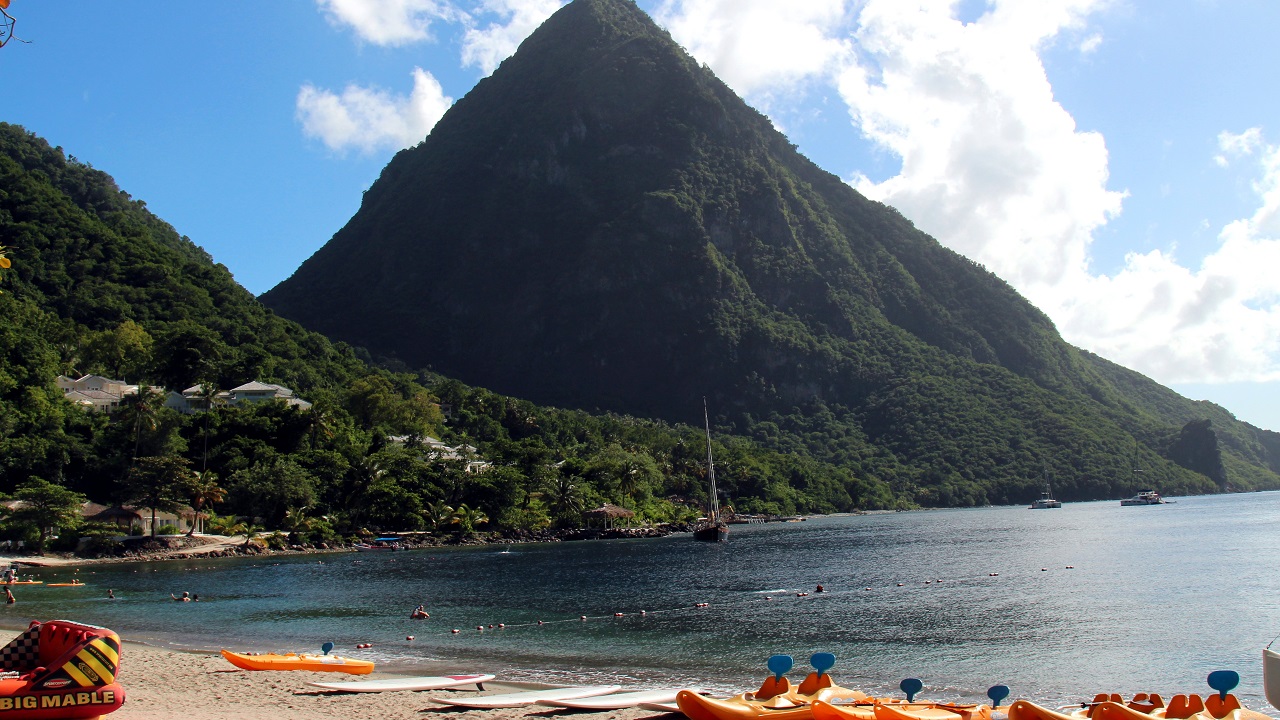 Sugar Beach, also known as Jalousie Beach: The great selling point of this beach is its location, nestled between the two towering Pitons. Like Anse Chastanet beach, much of it is taken up by guests from the Sugar Beach resort on site. But visitors can access it, either on foot (it’s a steep walk down from the road) or by resort shuttle for which you pay a $50 fee that can be offset against food and drink. There are some good areas for snorkelling and a few beach chairs for non-hotel visitors to sit on. You can also visit this beach on a boat tour. 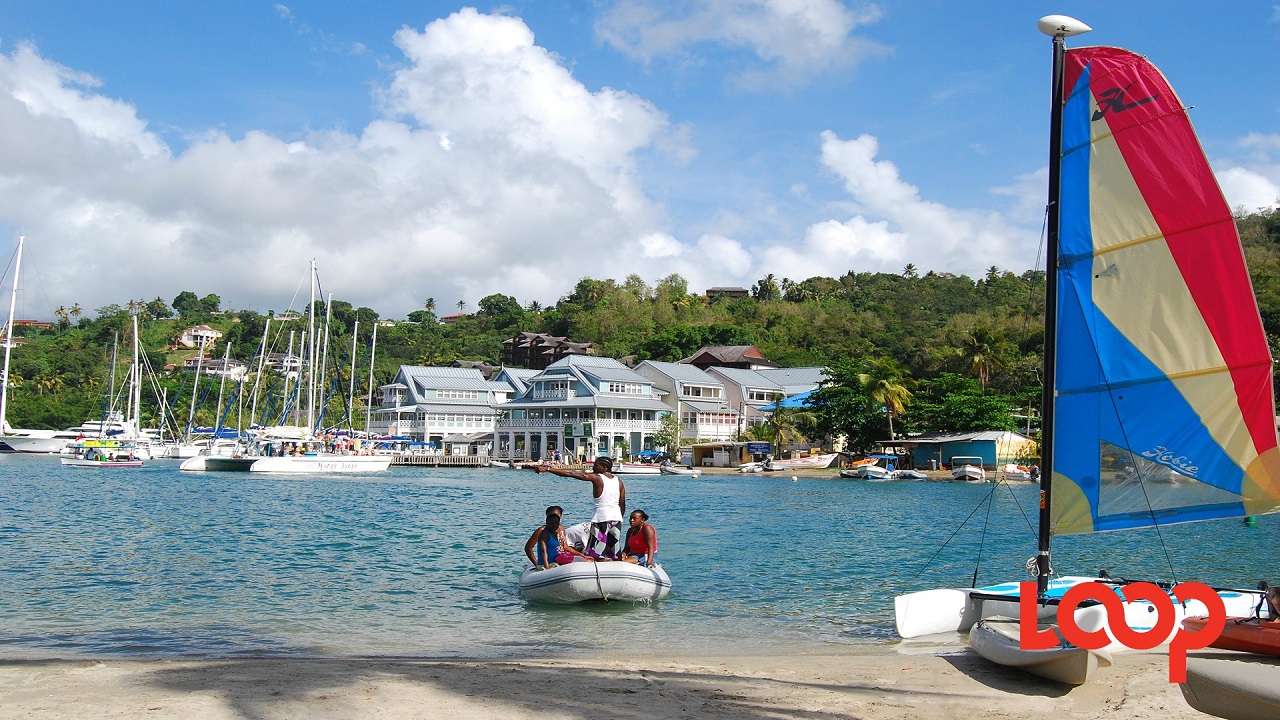 Marigot Bay: This lovely bay is just a short drive south of Castries. Its long, U-shaped harbour is surrounded by steep hills, making it particularly picturesque. It’s a great place for a waterfront meal, gazing at the glossy yachts moored in the sea. Masala Bay, offering Asian fusion, gets great reviews, as does Rum Cave, which wins plaudits for its great setting. There’s also a small beach area. 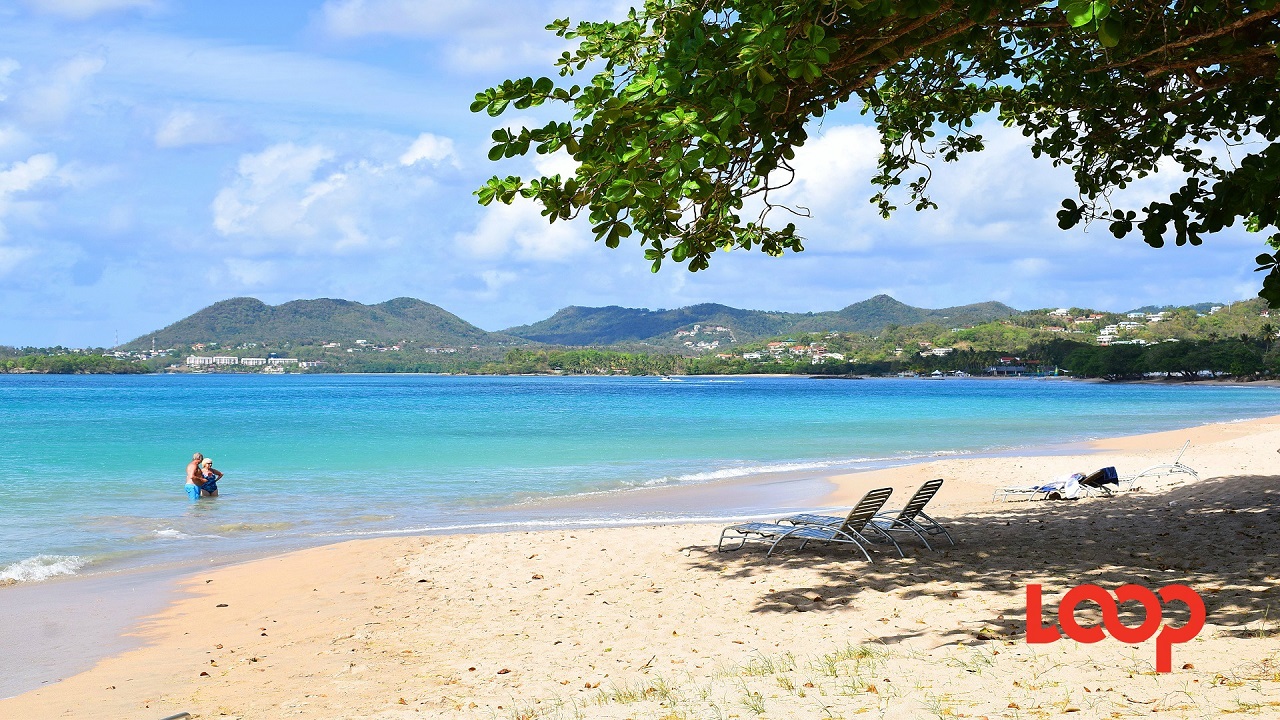 Vigie Beach: This is a good spot very close to Castries. Visitors say it’s not crowded, easy to rent chairs/loungers and there’s plenty of shade. There are several restaurants on site and clean toilets ($1). “We were undisturbed all day apart from a couple of friendly dogs,” wrote one visitor. One caveat: It looks walkable from Castries but most recommended going by taxi because the roads are busy and the pavements narrow. It’s opposite the airport but visitors say you don’t notice.

Le Toc: Not too far from Vigie beach is Le Toc beach, a short distance to the south-east of the St Lucian capital. Sandals Regency La Toc Resort sits on the beach but it is also open to the public via a path close to the Sandals gatehouse. It’s a narrow sweep of golden sand with some vendors on the beach. The sea can be choppy and visitors report not being able to swim on some days because of big waves and strong currents. But one reviewer wrote: “The magic happens on calm, sunny days around midday, when the sun shines through the calm waters. That's when you should go snorkelling on the south side of the beach, next to the rocks, to see tropical fish of many colours and stripes.” 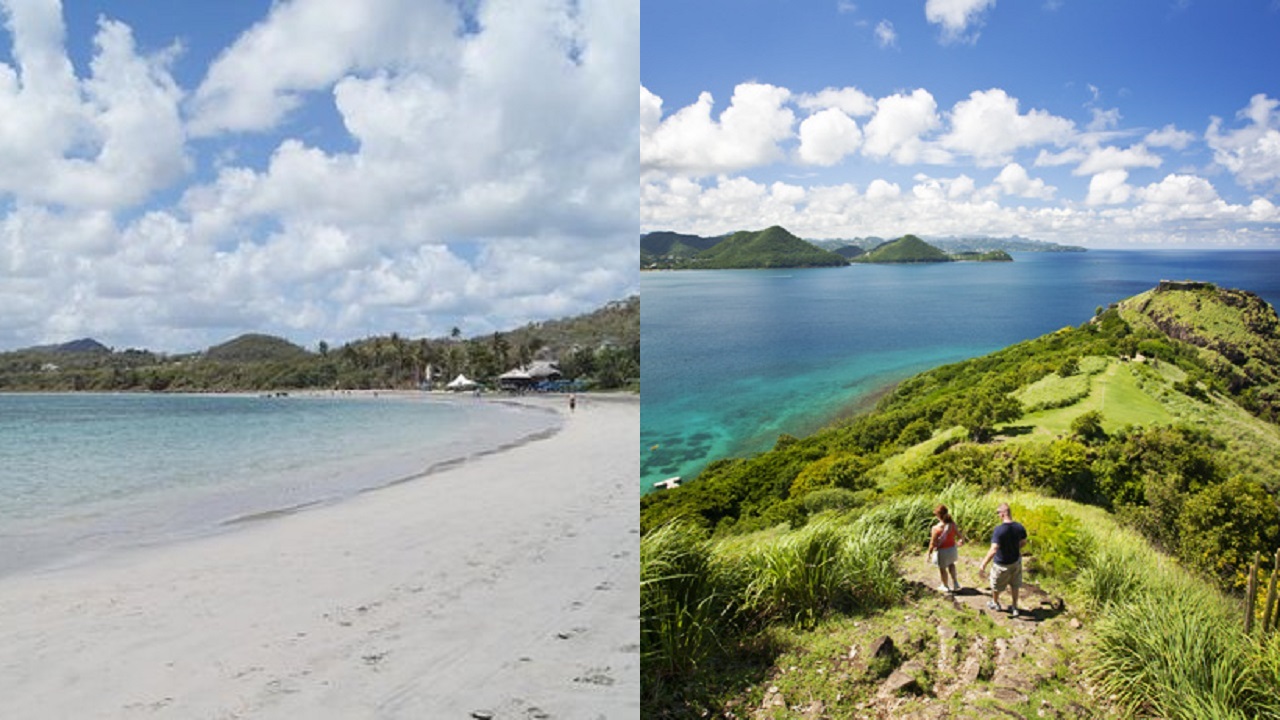 Pigeon Island: A short boat-ride or bus journey from Rodney Bay is Pigeon Island, a national park that is home to an old British fort. But it also has two beaches where you can rent snorkelling gear and sun-loungers. Most visitors report that these beaches are quiet and very enjoyable. The beach-front Jambe du Bois restaurant gets good reviews. “The relaxed atmosphere and views over the ocean offer a perfect combo for lunch,” wrote one reviewer. There’s also a larger public beach on the Pigeon Island Causeway just outside the national park, shared with the Sandals Grande resort.

Cas En Bas: Also known as Plantation Beach, this wide cove on the north-east coast of St Lucia is a great spot for kite-surfing and horse-riding. It’s on the Atlantic coast so windy days are common and visitors also report a fair bit of seaweed on the beach. But many say it’s an uncrowded, beautiful space that’s good for a walk. It’s protected by a reef so the water in the cove is also calm enough to swim. “We like it as it’s very wild and natural and not commercialised. There are areas of protected mangrove swamp there which attract birds. We have frequently been able to watch these searching for food at the water’s edge,” wrote one fan. Marjorie’s restaurant, on the beach, gets good reviews.

Grand Anse: For a complete contrast, you can try the east coast beach of Grand Anse. Most reports suggest you’ll need a 4WDrive to get to this isolated spot. It’s one of the island’s longest beaches, with golden sand stretching for more than a mile. It’s on the Atlantic coast and so pounded by waves – it’s not a great beach for swimming. There are no facilities and you may well have the beach to yourself, apart from a few fishermen. It’s a beach for walking, decompressing and enjoying the view.