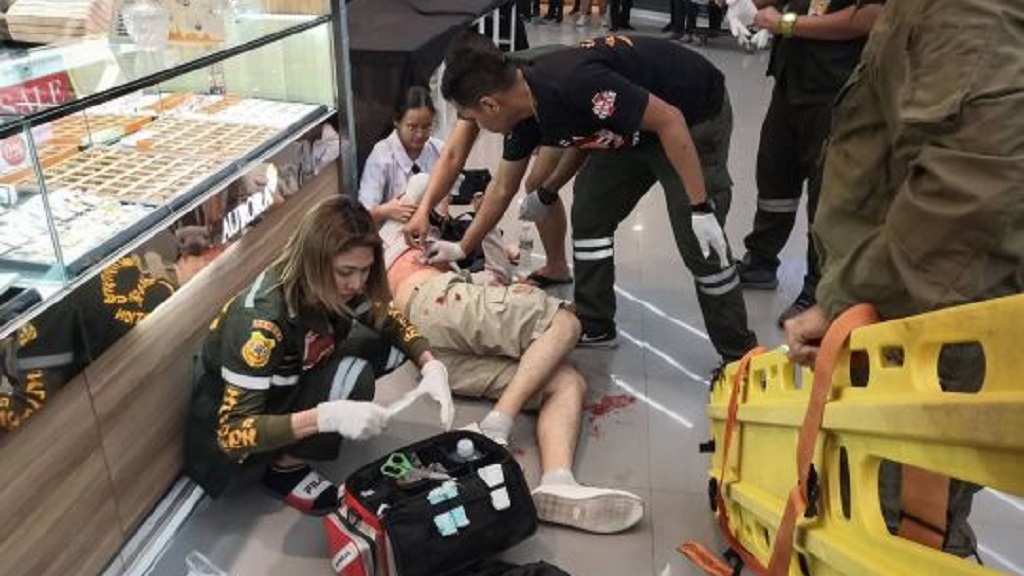 Thai police were hunting Friday for a masked assailant who went on a shooting spree at a shopping mall, killing three people, including a 2-year-old boy, and wounding four others as he robbed a jewellery store.

Security camera footage from the Thursday night spree at a Robinson mall in Lopburi province, about 145 kilometres (90 miles) north of Bangkok, shows a man wearing a ski mask, camouflage pants and a backpack across his chest shooting a customer at the shop and a sales clerk.

The man, carrying a handgun with a suppressor attached, then vaults on the jewellery store counter and grabs several trays of gold necklaces. A separate security camera video shows the toddler walking hand-in-hand with an adult near the jewellery store when he falls limp to the ground.

"The robber was merciless. We are looking for him in every place. Please trust us, we will definitely get this man and bring him to justice," Regional police commander Lt. Gen. Ampol Buaruppon said, adding police were authorized to use lethal force if he resists arrest.

The parents of the toddler, who was shot in the head and died after being rushed to a hospital, posted a message to their deceased son on their Facebook page.

"We love you very much. We are so sorry that we cannot protect you," it read. "Rest in peace our angel."

A mall security guard and a jewellery store saleswoman were also killed.

Rewards from police and other sources for information leading to the gunman's capture mounted Friday to 500,000 baht ($16,500), the website of the Bangkok Post newspaper reported.

"We have to admit that the robber is an expert about guns," deputy national police chief Gen. Weerachai Songmetta told reporters. "He is able to add a suppressor on a normal pistol. We are still looking for him in Lopburi and adjacent provinces."