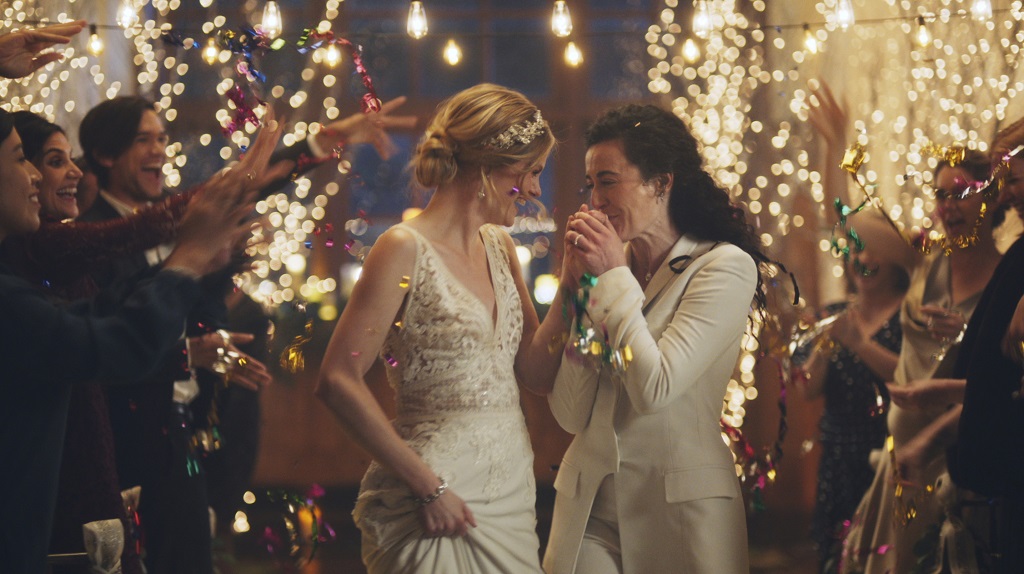 This image made from undated video provided by Zola shows a scene of its advertisement. The Hallmark Channel says it will reinstate same-sex marriage commercials that it had pulled from the network. Hallmark Cards CEO Mike Perry said in a statement Sunday, Dec. 15, 2019, that pulling the commercials “was the wrong decision." (Zola via AP)

The Hallmark Channel's decision to pull, then reinstate a commercial that featured a same-sex couple kissing shows how controversy can generate more publicity than simply ignoring it.

The company also didn't help matters by reversing its decision following the backlash.

“It's hard to keep everyone happy, but flip-flopping doesn't help,” said Allen Adamson, co-founder of the marketing consultancy Metaforce. “These are difficult issues to navigate but when you're going to make a call one way or another, make sure you understand the ramifications. You only want to pull the Band-Aid off once.”

The debacle ultimately made a winner out of Zola, the wedding-planning website whose ads a conservative advocacy group didn't want shown on Hallmark.

“For Zola, this is Christmas times 100,” said Laura Ries, president of marketing firm Ries and Ries. “Nobody ever heard of Zola, and now everybody knows it and loves it.”

Paul Argenti, Dartmouth College professor of corporate communication, added that the debacle "shows you if you know who you are, what you're doing and stand by your beliefs, you'll be better off in the end.”

That reputation prompted Hallmark to pull four Zola ads with same-sex couples after getting a complaint from a conservative group with a stated mission to “fight against indecency.” Hallmark allowed two ads with opposite-sex couples from Zola, though Zola pulled those after the same-sex ads were nixed.

In one of the pulled ads, two brides stand at the altar and wonder aloud whether their wedding would be going more smoothly if they had used a wedding-planning site like Zola. The lighthearted ad ends with the two brides sharing a quick kiss on the altar.

In an interview over the weekend, Hallmark spokeswoman Molly Biwer said the company felt “it was in the best interest of the brand to pull them and not continue to generate controversy.”

Instead, Hallmark faced criticism on Twitter from celebrities, including Ellen DeGeneres and William Shatner. “Isn't it almost 2020? What are you thinking?" DeGeneres tweeted.

Hallmark was also mocked on “Saturday Night Live." Netflix tweeted stills from a TV show and movie that it labeled “Titles Featuring Lesbians Joyfully Existing And Also It’s Christmas Can We Just Let People Love Who They Love.”

By Sunday, Hallmark had reversed its decision. In a statement, Hallmark Cards CEO Mike Perry said Crown Media was “agonizing” over the decision. “Said simply, they believe this was the wrong decision,” he said.

That, in turn, prompted calls for a boycott of the Hallmark Channel by the group that made the original complaint, One Million Moms. It accused Hallmark of caving to the LGBTQ community and portrayed the reversal as a betrayal to conservatives.

Hallmark Cards, an enterprise in the Kansas City, Missouri which started in 1910, has moved quickly before to respond to any flare-ups, such as when it removed a gift wrap from circulation after one person complained of seeing a swastika in its pattern. In March, it cut ties with actress Lori Loughlin, one of the so-called “Christmas Queens" who starred in its holiday movies, after her arrest in a college admissions scam put the family-friendly network and extended Hallmark brand in uncomfortable proximity to a national scandal.

The group behind the latest complaint, One Million Moms, is an offshoot of the conservative American Family Association. It has tried to implement many boycotts, including one in 2008 targeting Hallmark Cards when it started selling same-sex wedding cards. It has also tried to start boycotts against Target, "Toy Story 4" and other entities it deems to be LGBTQ-friendly.

Adamson said Hallmark's backlash was different from what exercise bike maker Peloton recently faced over its tone-deaf ad. That ad, widely mocked on social media, showed a man giving a reluctant wife a Peloton bike for Christmas. Ryan Reynold's Aviation Gin quickly capitalized on the debacle, showing the same actress out with friends trying to get over a split.

“The Peloton was painful for the company, but not a reflection of management values,” Adamson said. “In Hallmark's case, this decision was initially and now a reflection of what they stand for. You really want to not change that story. If you believe and stand for something, that should be your North Star.”

Bill Pearce, assistant dean at the University of California, Berkeley's business school, said Hallmark was ahead of the same-sex wedding issue when it introduced same-sex greeting cards in 2008, before gay marriage was legalized.

“Any goodwill engendered from the LGBTQ community is squandered and I don't think they made any friends on the other side of the issue either," Pearce said. “It's a classic blunder by indecision."

Serie A under fire over monkeys painting in anti-racism campaign