Harvesting rain could help Caribbean countries keep the water on after 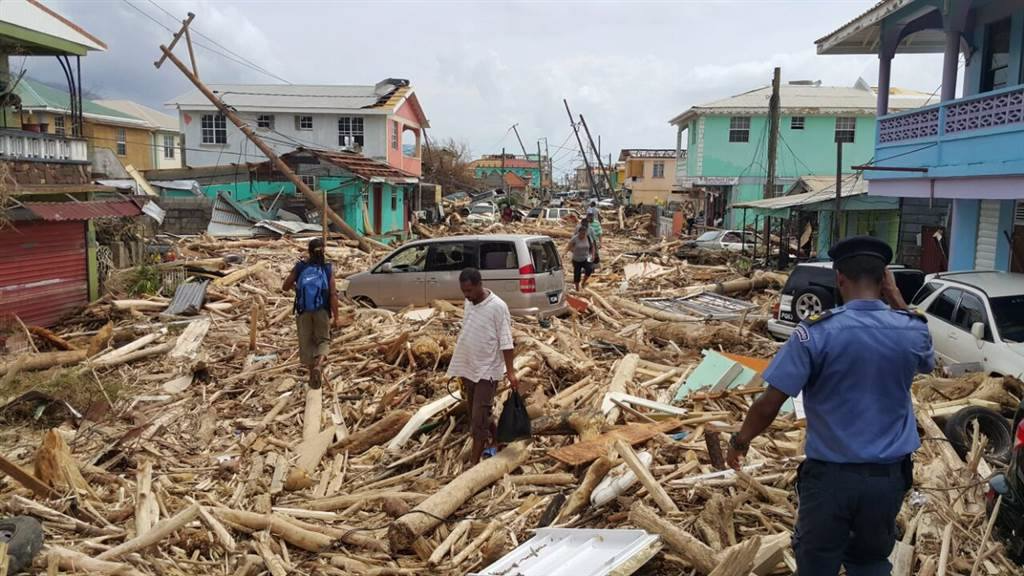 Photo: Dominica after the passage of Hurricane Maria in 2017.

(THE CONVERSATION) After hurricanes Maria and Irma hit last September, it took Puerto Rico until this June to restore water to most residents. Those living in rural and hard-to-reach mountainous areas waited the longest.

In Dominica, where 80 percent of the population was hit hard by Hurricane Maria, water service was not restored to the most remote areas until April 2018, several months after the storm.

Now, another hurricane season is already underway in the Caribbean.

Our research on rainwater harvesting  – a low-cost, low-tech way to collect and store rainwater – suggests this technique could be deployed across the Caribbean to improve these communities’ access to water both after storms and in everyday life.

Even before hurricanes Maria and Irma hit last September, some Caribbean islands were unable to provide reliable clean water for drinking and washing to all residents.

On many islands, the government utility-run piped water system either does not reach remote rural areas and other isolated areas or costs too much for low-income households.

Traditionally, residents in such places have gotten their water from underground sources, such as springs, wells or in the upriver – and thus presumably clean – section of streams.

Today, water pollution from a combination of domestic sewage, agriculture, food and beverage processing and manufacturing makes most groundwater unsafe to drink.

Up to 85 percent of wastewater across the Caribbean is now discharged, untreated, into local rivers, streams, lakes or straight into the ocean, according to the Caribbean Regional Fund for Wastewater Management, an intergovernmental agency.

Rainwater harvesting is an alternative way to obtain and store fresh water.

By collecting precipitation that naturally falls on rooftops and sidewalks in a tank, this process turns water that would normally wash away into a resource for cooking, laundry, irrigation and even water-intensive manufacturing. 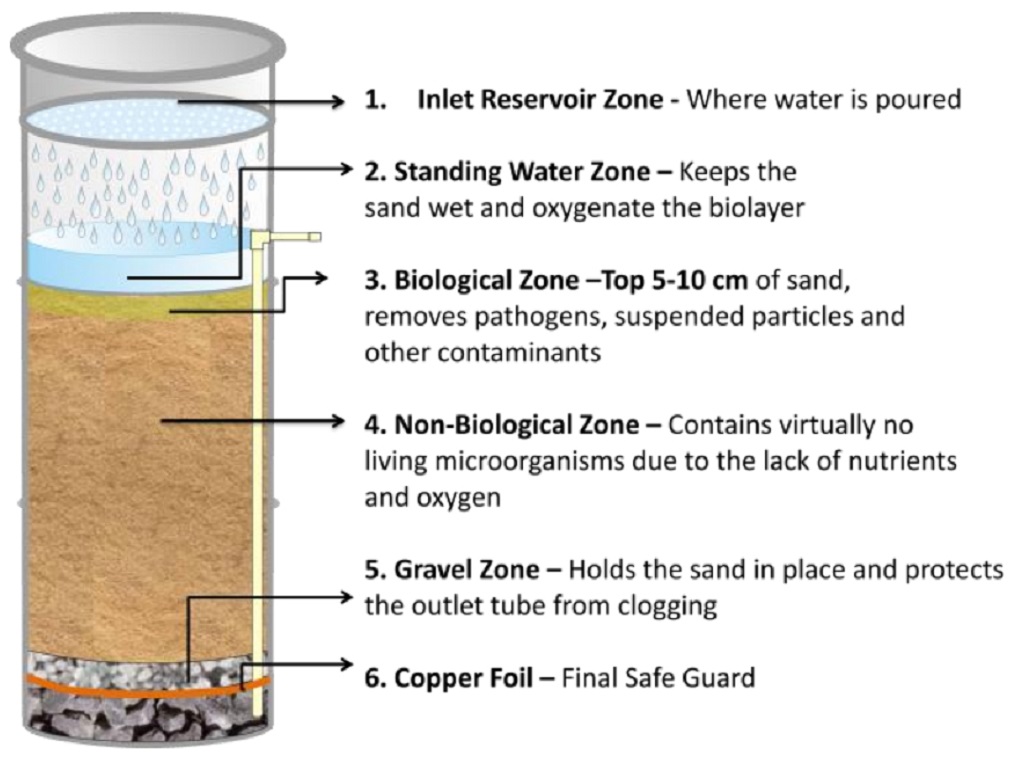 (Photo: An example of a biosand water filtration system.)

Rainwater, especially during the hurricane season, is free and plentiful in the Caribbean. Dominica can get up to 15 inches of rain a month in the fall. Puerto Rico averages 8 to 9 inches of rainfall a month from May to November.

Once rainwater is stored in the tank – which can range from 200 gallons for household use to 600,000 gallons in an industrial setting – pipes are connected from the tank into people’s homes, gardens, or wherever they need it.

The tanks must come equipped with a built-in filter to clean the collected rainwater, which may pick up various kinds of molds, bacteria and protozoa when it comes into contact with a rooftop.

The tank we’re developing for Caribbean islands uses a biosand filter – a container layered with gravel and sand, about the size of a small cooler – to purify rainwater.

As water travels through the sand and gravel bed, pathogens and particles are filtered out.

This process occurs either mechanically – solids get trapped in the gravel and sand – or by predation: Good microorganisms, which naturally live in the sand, consume bad ones.

Biosand filters remove up to 96.5 percent of bacteria and up to 99 percent of viruses from rainwater. By the time the kitchen tap is turned on, the water is clean and safe for drinking.

Rainwater collection, long used to serve livestock and farmers in rural areas worldwide, is an increasingly common response to water shortages in the developing world.

From 2005 to 2015, the United Nations’ “Water for Life” program actively promoted rainwater harvesting as a potential solution to global water shortages. According to one 2006 U.N. report, for example, rainfall across the African continent is “more than adequate to meet the needs of the current population several times over.”

The governments of Cambodia, Haiti, China, Thailand, India and Brazil have all deployed rainwater harvesting systems for households and industries to ease rural droughts and urban water shortages in recent decades.

Brazil, too, has made remarkable strides in utilizing rainwater to make citizens’ lives easier. 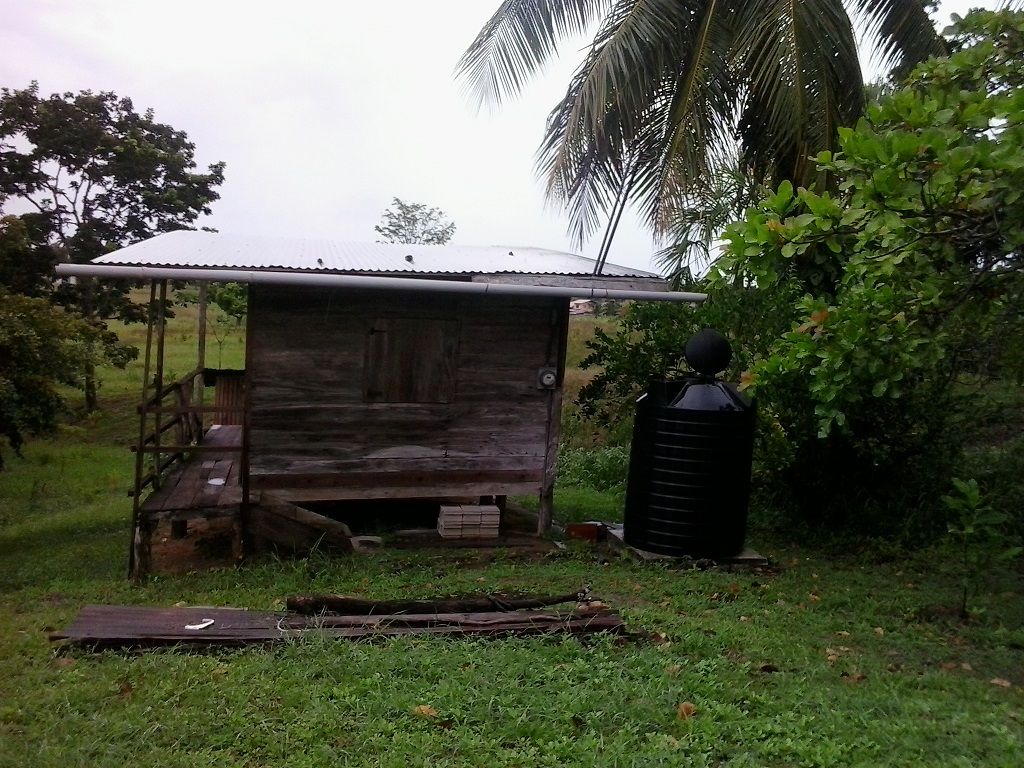 Semi-arid regions like Pernambuco, a state in the country’s northeast, can go seven to nine months without rainfall. A 4,500-gallon tank – roughly the size and weight of a Greyhound bus – collects enough water during the rainy season that a family of four can live off it for three to four months during drier weather.

By 2014, the program had reached its goal of serving 1 million Brazilian households.

Challenges in the Caribbean

Despite these global successes, very few Caribbean countries have taken action to implement rainwater harvesting on any significant scale.

In Haiti’s Artibonite Valley, biosand filters are used to purify the water obtained from shallow ground wells. And the United Nations has helped develop rainwater harvesting infrastructure in southern Jamaica to facilitate some communities’ resiliency to climate change.

We believe rainwater harvesting can work for more of the Caribbean. The funding model and equipment just need to be designed to meet the islands’ special needs.

Most rainwater storage tanks in big international programs are made from fiberglass, other plastic or welded steel. Those materials can be expensive for families operating on a limited budget, as many rural Caribbean households do.

Tanks made of cement and chicken wire

Our design is made of ferrocement – a kind of thin, reinforced concrete widely used to collect rainwater in India.

This construction style is affordable – especially if subsidized by small government loans – because it uses materials readily available in the Caribbean: cement, sand and water mixed together, reinforced with chicken wire and steel bars.

The cement acts as a super glue, binding the particles of sand, rebar and chicken wire together into one strong, compact mass.

This cheap, durable method is ideally suited for the Caribbean environment, too. The island region is susceptible to not just hurricanes but also earthquakes. The steel bars can withstand the shaking of an earthquake, while the cement is resistant to high winds.

During particularly powerful hurricanes, Caribbean islands may even get so much rain that it overwhelms their aging water infrastructure, which simply cannot handle the volume and velocity of storm runoff. When people have cisterns, that excess rain goes to good use.

We have now tested a model ferrocement rainwater harvesting system on the island of Grenada. With some tweaks to improve ease of construction – which are now underway – we believe it could serve island residents well.

The government there has expressed interest in introducing rainwater harvesting to increase the reliability and accessibility of its municipal water systems.

Our next stop for testing the ferrocement-and-biosand system is Dominica. And after that, we hope, the rest of the Caribbean will catch on.

This article was originally published on The Conversation.

Get ready for Hurricane season with these essential supplies