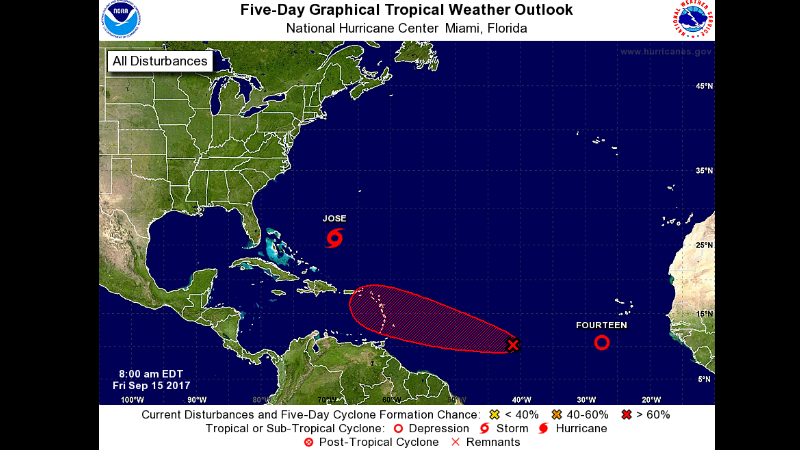 The Barbados Meteorological Services said today it is currently monitoring the progress of a strong tropical wave and Tropical Depression #14, located in the central and eastern Atlantic respectively.

In a bulletin issued at 12 p.m., it said of immediate interest is the tropical wave which is closer to Barbados.

At 8:00 a.m. this system was located about 1200 miles east of the Windward islands. At present, model guidance is suggesting some slow development is possible over the next few days as it tracks westward to west-northwestward at about 15 mph.

Regardless of development, some moderate to heavy showers, periods of rain, scattered thunderstorms and occasional gusty winds are likely to spread across Barbados starting late Sunday into Monday.

Rainfall accumulations of at least six to eight inches (150 – 200mm) are possible with the passage of the system.

Due to the already saturated nature of the soils, a Flood Warning may be required at short notice.

Marine conditions are also expected to deteriorate by Sunday afternoon with sea-swells expected to range between 4.0 and 6.0 metres.

As a consequence a High Surf Advisory and Small Craft Warning will be in effect from 6:00 p.m Saturday, September 16, 2017.

Large waves and dangerous rip-currents can be expected which will create unsafe conditions for small-craft operators. Sea-bathers and other users of the sea are also advised to stay out of the water during that time. This activity may become even more adverse at times of high tide.

A Small-Craft Warning means in this case that seas equal to or greater than 3m (10ft) and wind speeds of 25 to 33 knots ( 47 to 61 km/h ) will be affecting the marine area. A High-Surf Advisory is issued when breaking wave action poses a threat to life and property within the surf zone.

With respect to Tropical Depression #14, this system is expected to track west-northwestward to northwestward into the central Atlantic well away from Barbados and the eastern Caribbean.