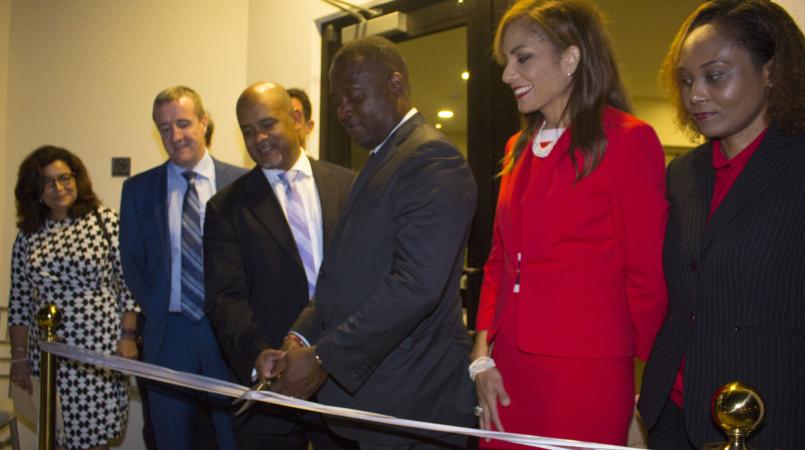 Minister responsible for Small Business Development Donville Inniss, is throwing his support behind private sector investors, who he says have the vision to see what is invisible to others.

He is at the same time silencing those who instead of applauding, criticise investors and make them feel unwelcomed.

Speaking recently as E.Y. Barbados, formerly called Ernst and Young, officially opened the door to their home at the Regus Centre in Welches, St. Thomas he lauded developers of the One Welches Project saying the developers and several others in the area had the vision to acquire the surrounding lands, as well as the skills, determination and capacity to work hard in order to get it to the point now, where the Warrens/Welches area is quickly becoming the town centre of choice in the island.

A gleeful minister said it is tallest and perhaps most luxurious building in the area, stressing that the work done is a deep manifestation of the faith that the developers have in Barbados, its people and its economy.

He has taken issue with those who he says would argue that in 2016 no commercial building should be more than two storeys tall and at least a mile away from residences. Some may even argue he stressed that the development may hinder a UNESCO inscription some 100 years from now.

He however admonished them saying, "We have to find the right balance that captures our history, acknowledges our present and projects our future. Sticking to one era will ensure that this island remains recognizable to the British who landed in 1625 upon their return, and will never reflect our modern times.”

He reminded those present that a lot of families had their lives enhanced due to the opportunities presented to them from this project:

"That is why I get a bit annoyed when I see the obstructionists in our midst whose public and private utterances cause unnecessary delays in the provision of major physical development projects. I am not stating that we must allow developers to do as they please, but we certainly must not go to the other extreme in making their investments feel most unwelcomed.

“I note that most of the recent critics of significant real estate development projects have themselves never even created a job for one person in this island."

He has committed that as long as the laws of the land are followed, he will stand up anywhere in this island and publicly defend private sector investors, even in the face of condemnation from his political friends and foes.

Barbadian business to expand across the Caribbean