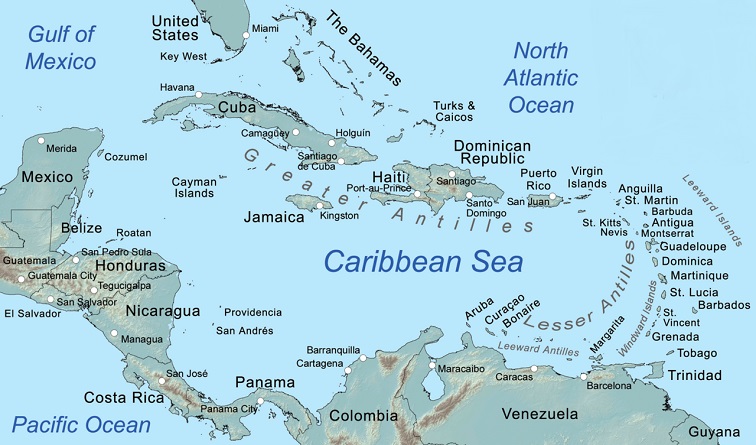 The Caribbean Sea is home to more islands, fish, reefs and marine life than most people think or know.

The Caribbean Sea is a body of water, southeast of the Gulf of Mexico and adjacent to the Atlantic Ocean.

Caribbean islands fall under the category of small island developing states (SIDS), and may indeed be small in the grand scheme of things, but the Caribbean Sea is one of the largest seas at over 1.063 million square miles in size. As a point of reference, the country of Jamaica has jurisdiction over an area of water 23 times its landmass, much of which includes the Caribbean Sea.

Here are some surprising facts we bet you didn’t know about the Caribbean Sea:

1. Despite being almost six times smaller than the smallest ocean, the Arctic Ocean, the Caribbean Sea is home to 14 per cent of the world’s reefs.

2. The Caribbean Sea is home to the second-largest barrier reef in the world, the Mesoamerican Barrier Reef, and the largest reef system in the Northern Hemisphere. It runs 620 miles along the coasts of Mexico, Belize, Guatemala, and Honduras.

3. Coastal communities (existing within 100 km from the Caribbean sea) from 39 countries and territories, with populations of at least 116 million people rely on the Caribbean Sea for their food and livelihoods.

5. The geological age of the Caribbean Sea is estimated at between 160 and 180 million years.

6. A total of 12,046 marine species live in the Caribbean Sea. Of these, there are more than 1,000 known fish species, including flying fish, moray eels, bull sharks, tiger sharks, Caribbean reef sharks, giant oceanic manta rays, and parrotfish, as well as 90 mammal species, including dolphins, sperm whales, manatees, humpback whales, and seals. The habitats supported by the reefs of the Caribbean Sea are critical to such tourist activities as fishing and diving, and provide an annual economic value to Caribbean nations of $3.1–$4.6 billion.

7. The deepest point of the Caribbean Sea is the Cayman Trough, which is located between the Cayman Islands and Jamaica, at 7,686 m (25,217 ft) below sea level.

8. The Caribbean Sea is one of the largest oil-producing regions in the world, providing approximately 170 million tons of oil every year.

UN chief warns oceans are 'under threat as never before'