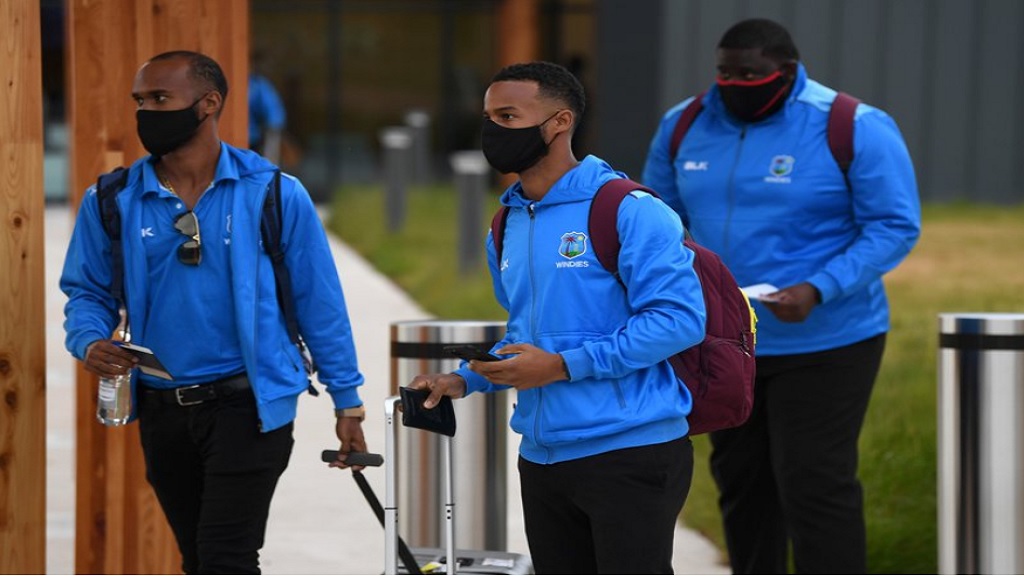 West Indies players arrived in England ahead of the planned behind-closed-doors Test series, which will start in Southampton on July 8.

Captain Jason Holder welcomed "a huge step forward" for cricket and sport as West Indies embarked on a trip to England for their three-match Test series.

The Windies have arrived in Manchester ahead of the planned behind-closed-doors Test series, which will start in Southampton on July 8.

They are the first international sports team to visit the United Kingdom since lockdown began in March amid the coronavirus pandemic.

West Indies' 39 members touring group, which includes 25 players, tested negative for COVID-19 prior to their charter flight from Antigua.

They will enter quarantine at Old Trafford, which will host the second and third Test matches and serve as their base to prepare for the opening encounter.

Shimron Hetmyer, Darren Bravo and Keemo Paul opted to withdraw from the touring party because of the pandemic.

But West Indies captain Holder was in a positive mood and aware of the significance of the trip.

"This is a huge step forward in cricket and in sports in general," Holder said, speaking before the team landed in England.

"A lot has gone into the preparations for what will be a new phase in the game.

"I’m happy for the support and well-wishes we have been receiving from our loyal and dedicated fans once it was confirmed the tour would go ahead. This has been a source of great inspiration.

"We have a fantastic group of cricketers, coaches, medical staff and support staff and I know everyone is eagerly looking forward to the start of the first match."

West Indies beat England 2-1 in the Caribbean last year but have not won a series in England since 1988.

Holder said: "There is expectation in the air that we will defend the Wisden Trophy and we will certainly put in the work and give it our all to keep hold of it."

Assistant coach Roddy Estwick was also optimistic about the team's chances if they can contain the England bowling attack.

"Three years ago, it was a very, very young unit," Estwick said of the team who lost the 2017 series 2-1 in England. "Now we've got seasoned Test players, we've got players with 50 Test matches.

"So I think once we can hit the ground running and get the preparation in, get some match practice under our belts, we can be a lot better.

"We've got youngsters coming through. If we can get scores on the board we can really challenge England because I know the bowling will be good."

West Indies Test series against England postponed due to COVID-19