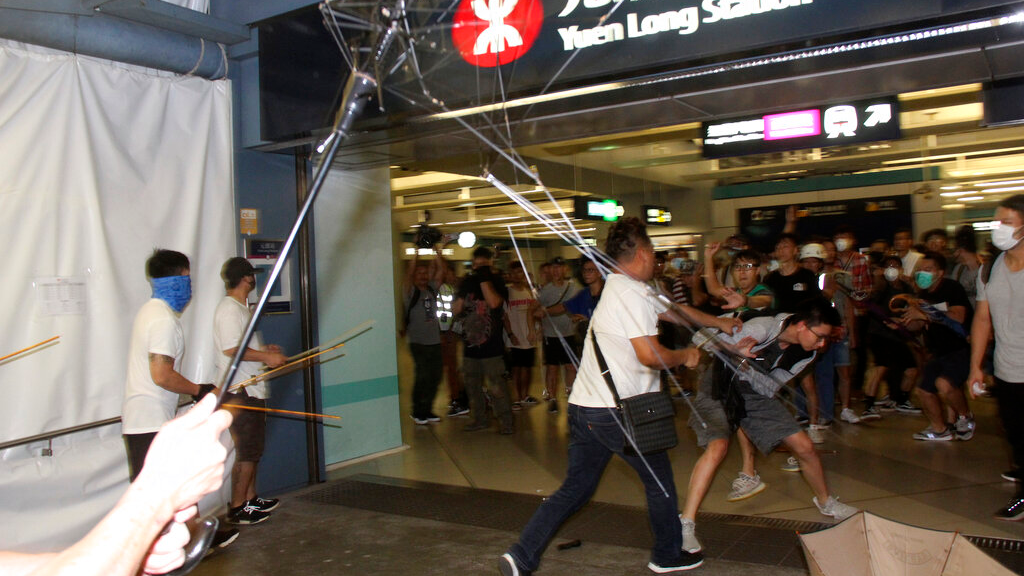 Hong Kong police say they've arrested six men, some with links to triad gangs, following a violent attack on pro-democracy protesters at a subway station over the weekend that saw dozens injured.

Senior police official Chan Tin-chu said the men, aged 24-54, were held for "unlawful assembly" and are being investigated for taking part in the attack late Sunday night. Some of them are villagers, and their occupations range from drivers and hawkers to renovation workers, he said.

"Some of them have triad backgrounds," he said. "I believe that more ... will be detained soon. Police will not condone any form of violence."

Police are still investigating the motive for the attack, Chan said, without providing further details on the alleged links to the triads, which refer to powerful organized crime syndicates in Hong Kong. The triads control certain neighbourhoods in the city and are believed to have strong political influence.

A gang of white-clad men armed with metal rods and wooden poles beat up anti-government protesters and others inside a subway station in Hong Kong's Yuen Long neighbourhood late Sunday, injuring 45 people, including a man who remained in critical condition.

More than 100,000 people took part in the latest rally in the city earlier that day to demand democracy and an investigation into the use of force by police to disperse crowds at the summer-long protests. Some protesters on Sunday directed their ire at China, pelting its office in Hong Kong with eggs, spray-painting a wall and defacing the Chinese national emblem.

As demonstrators made their way home, the white-clad men descended on a group of them at the subway station. Videos showed them charging into the trains and beating up people who tried to defend themselves with umbrellas.

Police have come under fire for being slow to respond to the violence against the protesters. Hong Kong leader Carrie Lam has said police were stretched thin due to the massive crowds and denied accusations that her government colluded with the assailants.

The assault escalated a crisis that had thrown the former British colony into turmoil after millions of people took to the streets in waves of protest against an extradition bill that would send suspects for trial in China. Critics see it as rising Chinese influence and fear it will chip away at Hong Kong's freedoms promised under a "one country, two system" formula since it returned to China in 1997.

More protests have been planned, but the latest violence has fueled fears that China's People's Liberation Army may intervene.

Walk and 'back your children' before gangs make them ‘family’