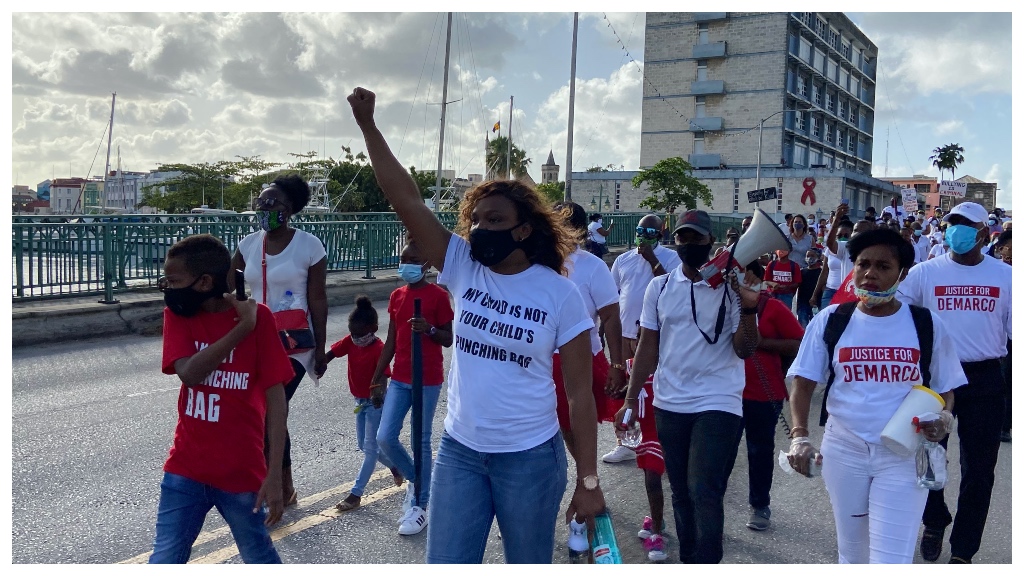 The rallying cries of "bullying is wrong", "keep your hands to yourself" and "Justice for Demarco" echoed through The City Sunday evening as dozens of Barbadians demanded action for the incident which left a 10-year-old student, Demarco Gibbs, comatose.

The Deacon's Primary School student was hospitalized June 14 after being struck on the head with pieces of wood by his playmates according to reports.

His mother, Tricia Gibbs' impassioned plea for answers led to national ire and outrage. This in turn motivated Barbadian blogger, Stephanie Chase of The Chase Files to create a petition which has accumulated almost 30,000 signatures, to request for authorities to investigate the matter.

Chase organized the #JusticeforDemarco march to call for further support against bullying in Barbados.

"This march is to ask for swift justice on his behalf. I think the ownest is on the parents to come forward and do the right thing; to acknowledge that something wrong was done and to basically say we apologise and to let your children know that violence of any kind is unacceptable," Chase told Loop News.

She contended bullying remains a persistent issue in the island's public school system and stressed that it needs to be seriously addressed.

"Parents need to be held accountable for how they raise their children, the values and morals that they instill or that they don't instil.

"We need to get to the bottom of this aggression. What is causing children to be so aggressive?
There are many underlining issues that lead to bullying but the message we need to send is that bullying of any kind will not be tolerated."

The march started at Jubliee Gardens and concluded in Independence Square, where friends, family, and supporters prayed for Demarco and his family.

While struggling to compose herself, Demarco's mother, Tricia Gibbs expressed her gratitude for the overwhelming support. Gibbs admitted she was struggling to cope but believed that " God got him [Demarco]".

Her sister, Jaime Grazette applauded those that participated in the march but indicated that the family was upset by the rumours circulating on social media of Demarco's death.

Additionally, she dispelled rumours that the police were not contacted after his attack.

"The police were called because Demarco was under-recovery and he told his mother he wanted to speak and his mother contacted the police but the police never came," Grazette explained.

Demarco's aunt also had some advice for children who are bullied.

"If you are at school and someone is beating you or bullying you, tell your mother or tell your teacher, don't be afraid because the only punk in this situation is the child who is bullying," she said.

Chase gets permission from police to hold #JusticeforDemarco march