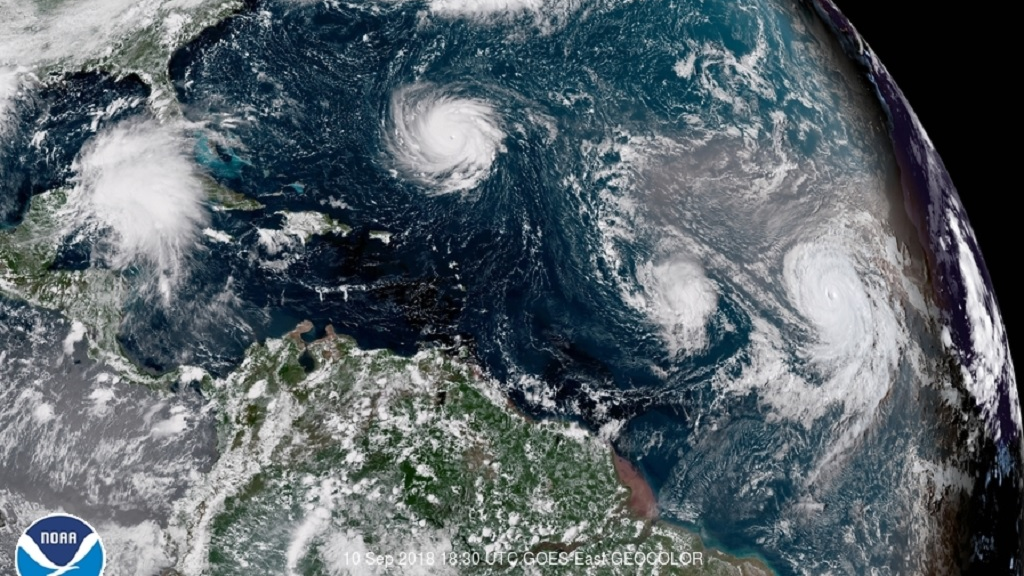 Hurricanes Florence, Isaac and Helene moving through the Atlantic. Photo courtesy the NHC.

There are now three hurricanes active within the Atlantic, according to updates from the US National Hurricane Center.

Hurricanes Florence, Isaac, and Helene, are all moving on various paths within the Atlantic, and are being monitored by the NHC and other official weather agencies.

Updates via the NHC are as follows: 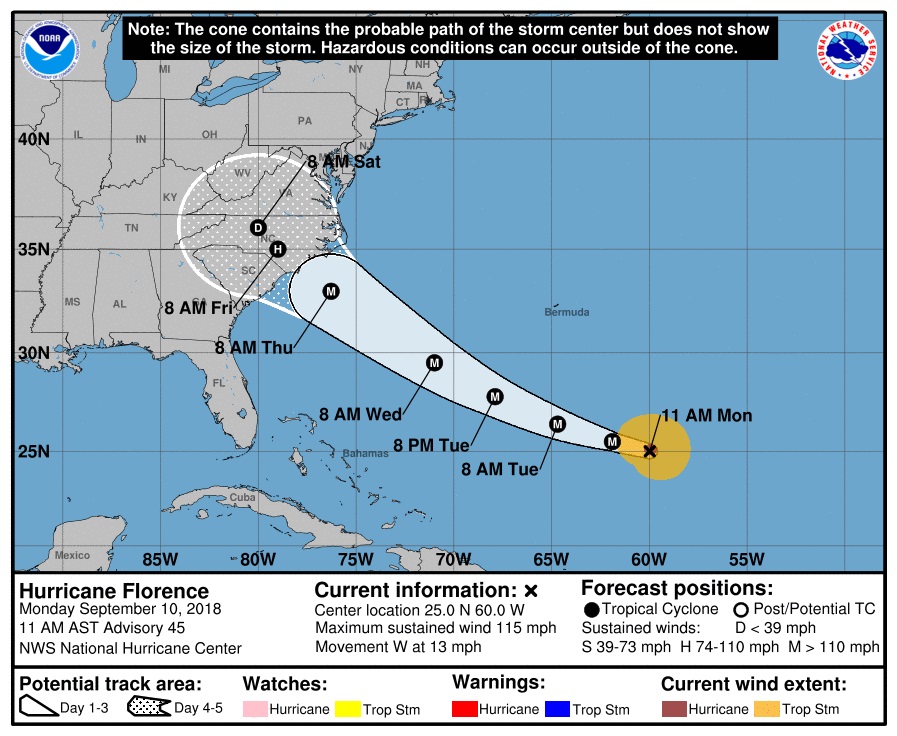 Florence exploded into a potentially catastrophic Category 4 hurricane Monday as it closed in on North and South Carolina, carrying winds up to 130 mph and water that could wreak havoc over a wide stretch of the eastern United States later this week.

The South Carolina governor ordered the state's entire coastline to be evacuated starting at noon Tuesday.

The storm's first effects were already being seen on barrier islands as dangerous rip currents hit beaches and seawater flowed over a state highway. Communities along a stretch of coastline that is vulnerable to rising sea levels due to climate change prepared to evacuate.

By noon Monday, Florence was centered about 1,230 miles (1,985 kilometers) east-southeast of Cape Fear, North Carolina, and moving west at 13 mph (20 kph). Its center will move between Bermuda and the Bahamas on Tuesday and Wednesday and approach the coast of South Carolina or North Carolina on Thursday, the National Hurricane Center said. 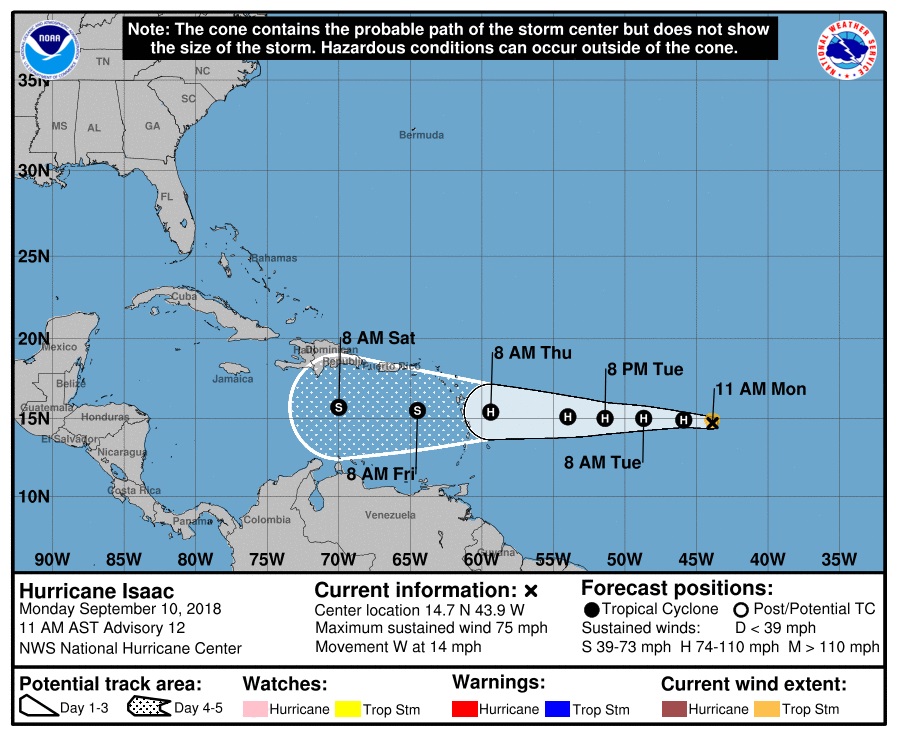 In an 11:00 am advisory on Monday, the NHC said there has been little change in strength as the storm continues west toward the Windward Islands.

A westward motion with a slight increase in forward speed is expected through the end of the week.  On the forecast track, Isaac should move across the Lesser Antilles and into the eastern Caribbean Sea on Thursday.

Maximum sustained winds are near 75 mph (120 km/h) with higher gusts.  Additional strengthening is expected over the next day or two.

Weakening is forecast to begin by the middle of the week as Isaac approaches the Lesser Antilles.

Interests in the Lesser Antilles should monitor the progress of Isaac.

Citizens are advised to follow the Met Office for updates. 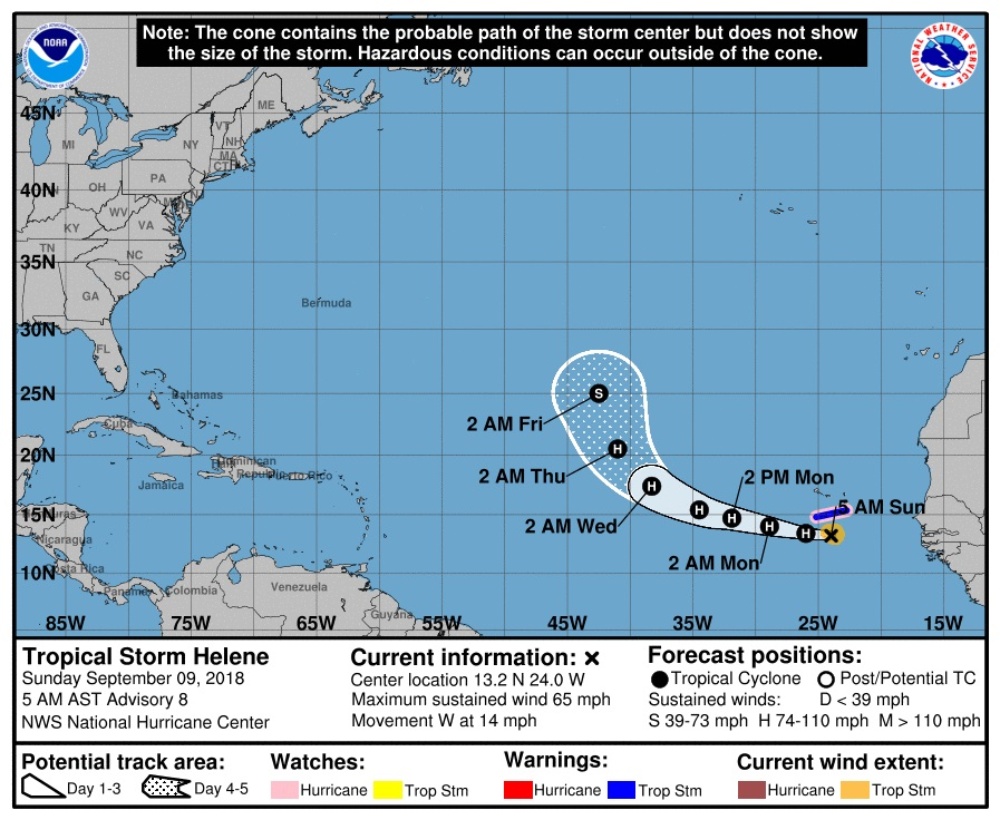 Hurricane Helene heading west then north, away from Caribbean

Meanwhile as of Monday midday, Hurricane Helene was located near latitude 14.6 North, longitude 30.0 West and continued moving toward the west-northwest near 16 mph (26 km/h).

Maximum sustained winds have increased to near 105 mph (165 km/h) with higher gusts.  Some additional strengthening is expected today, and Helene is forecast to become a major hurricane by tonight. Steady weakening is forecast to begin by late Tuesday.