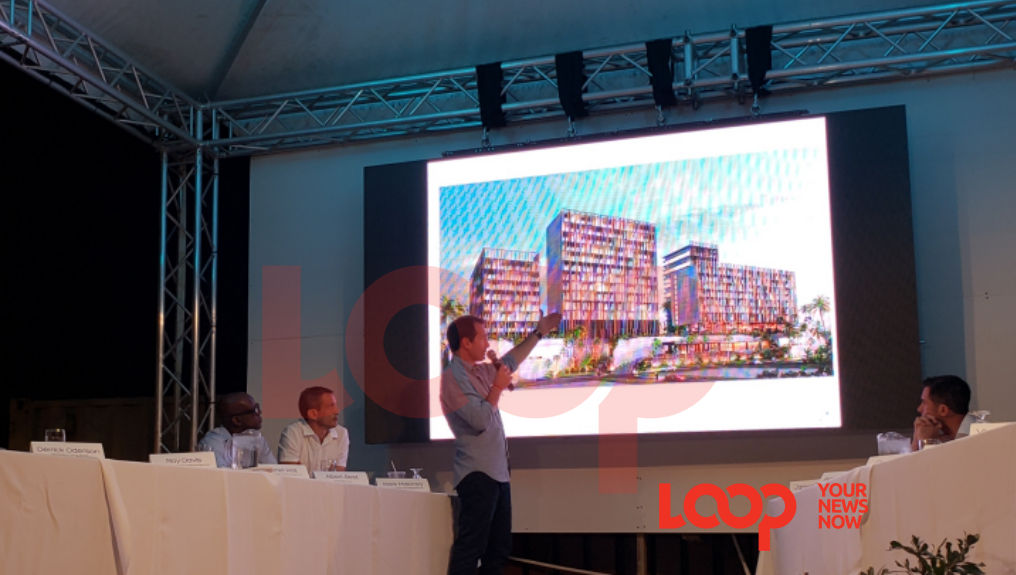 Architect Gabriel Raij shows the proposed designs for the Hyatt Ziva in Barbados.

Hyatt Ziva may be a USD $175Million direct investment but it is not in the clear yet as it relates to permissions.

And as such, transparency is the byword of developers and architects as they seek to bring the Hyatt Ziva to Barbados.

To this end as they work to have full disclosure with the public, tonight at the public presentation at Copacabana in Bridgetown, developer Mark Maloney confirmed that planning permission has not been granted as yet. However, even at this early stage, he stressed that the intention is to give the public the details to better inform them as the phases unfold.

Planning Consultant and Attorney Derick Oderson chaired the meeting and added that the current status of the project entails completed studies and submissions which were used to inform the new design.

Noting that the Ziva will have an 18-storey building included in its new design, Maloney clarified that contrary to the belief that the edifice will block out much of the beach view, he compared the height of the proposed building to the Central Bank. He said that persons need not confuse “storeys and floors”. He said regardless of the fact that the building will be 18 storeys tall it will only be 20 feet taller than the Central Bank because of the technology being used in the construction and the floor to ceiling heights.

Attorney Lalu Hannoman, wearing his Marine Trust hat, also challenged the light which will be generated by the tall buildings as an issue for turtles seeking to nest; while others spoke to the shadow created by the three main buildings.

With height being a bone of contention with many commenters who posed questions during the Q & A segment, developer James Edgehill also confirmed that they are in discussions with the firefighters and the building standards authority because new equipment will be needed to be acquired. However he went on to say that the equipment will benefit the country as buildings may continue to climb higher beyond Hyatt in the future.

Oderson said the final design and architectural drawings will be submitted in coming weeks.

And Maloney emphasised that the questions posed at tonight’s presentation will be taken into account as they move ahead to the Town Hall Meeting. He said that such will be held as is mandated by the legislation to ensure that Barbadians are not blindsided as they move forward.

Seemingly having learned from his initial attempt to successfully construct a Hyatt Centric at the same location previously, Maloney also confirmed that this toss an environmental study has been conducted and submitted.

Hyatt Ziva is projected to bring in 2500 jobs during construction and 1500 when in operation along with a total number of indirect jobs in the area of 3270.

PM: Hyatt studies will be conducted

Comissiong offering no "olive branch" to Mottley on Hyatt case